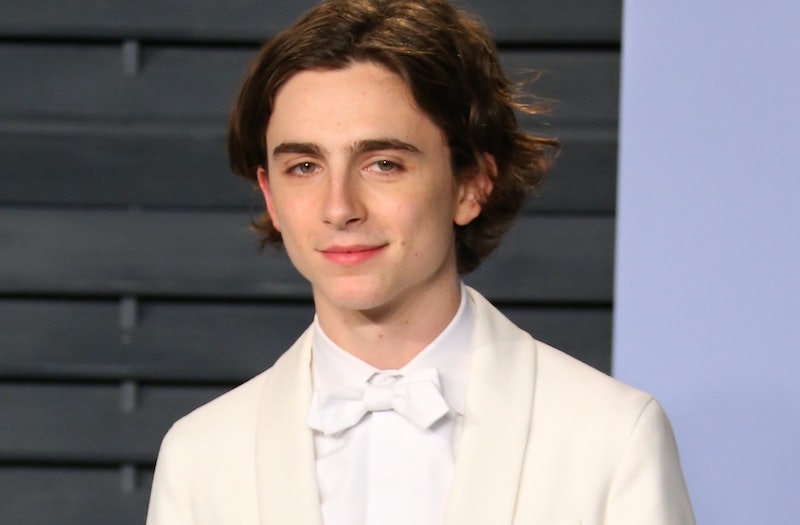 Calling all members of the Laurie hive: Timothée Chalamet will attend the 2020 Oscars on Sunday, Feb. 9. Chalamet last starred on the big screen as Theodore "Laurie" Laurence in Greta Gerwig’s film adaptation of Louisa May Alcott’s Little Women. The Saoirse Ronan-led period drama earned six nominations at this year’s Academy Awards, including Best Picture for Amy Pascal and Best Adapted Screenplay for Gerwig. While the nominations alone all but ensure an appearance, Chalamet will also play another pivotal role at the ceremony: presenter.

The presenters list isn’t the only roster to look forward to: Billie Eilish, Elton John, and Idina Menzel will take the stage at the Dolby Theatre in Los Angeles for musical performances. This line-up will surely compensate for another year without a host.

Chalamet’s stint as a presenter won’t mark his first time at the ceremony. He scored a Best Actor nomination at the 2018 Oscars for his lead role as Elio Perlman in the romance film Call Me By Your Name. While the win went to Gary Oldman for his role in Darkest Hour, Chalamet nabbed wins at the Independent Spirit Award, Gotham Independent Film Award, and New York Film Critics Circle Award for his role.

On Sunday, Little Women will vie for Best Picture against Parasite, Marriage Story, The Irishman, Jojo Rabbit, Joker, Ford v Ferrari, 1917, and Once Upon a Time in Hollywood. The lack of recognition for Gerwig and other female directors in the Best Director category became a topic of controversy post-nomination announcement last month. Pugh, nominated for Best Supporting Actress for her role as Amy March, called the snub a "big blow." She told Deadline, "[Greta] created a film that is so her and so unique and it’s just come out of her, and it’s been a story she’s wanted to do for so long. I think everybody’s angry and quite rightly so."

Tune into the Oscars on Sunday, Feb. 9 on ABC at 5 p.m. PST to marvel over Chalamet and the rest of the Little Women gang.