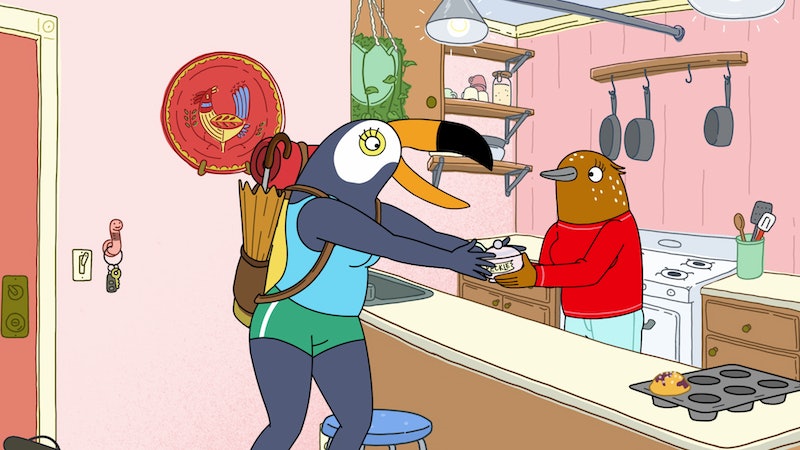 Tuca & Bertie isn't Netflix's first foray into animation, but it does mark a significant landmark for Netflix by being their first ever animated series for adults created by a woman. While the show is destined to be a fan favorite, Netflix has not yet announced if Tuca & Bertie will return for Season 2. However, fans of the show don't have to look far for what to watch while waiting for more Tuca & Bertie episodes, as creator Lisa Hanawalt has tweeted out a list of other women-created adult animated series worth viewing.

While only Netflix can decide whether or not Tuca & Bertie is getting renewed or not, it'd be surprising to say no to more of a show that has such a massive built-in audience. The show's show's animation style, which shares more than a few similarities BoJack Horseman, will likely entice the viewers who have stuck with that show throughout its five seasons, with a sixth in the making.

As if that wasn't enough, it's worth considering that the show's co-stars, Ali Wong and Tiffany Haddish, have over 5 million combined Instagram followers between the two of them. Tuca & Bertie is primed to be a success, which is a welcome change from the list that Hanawalt tweeted out of female-created shows, some of which never even made it to air. If you're looking for more where Tuca & Bertie came from, check out these shows from Hanawalt's list and her followers recommendations.

Daria may have been set in school, but the hilarious and nuanced coming-of-age series proved it wasn't just for children. The series, co-created by Susie Lewis Lynn, aimed its acerbic wit at suburban living and the culture of the late-90's. The show's legacy is so strong that MTV announced in 2018 that they would be producing a reboot of the series to update Daria's droll observations for the late-2010's.

Hey Monie!, created by Dorothea Gillim and produced by Soup2Nuts (the animation studio behind cult adult-animation classics Home Movies and Dr. Katz, Professional Therapist,) was arguably way ahead of its time. The BET show didn't last long, but its exploration of black female friendship can be seen in popular live-action shows of 2019 like Insecure, grown-ish, and Atlanta. The show never got a DVD release and isn't on any major streaming services, but most of the show's episodes can be found on Youtube.

ABC ran one season of this animated series created by Sono Patel, but it wasn't renewed for a second.

This TBS sitcom, created by Pam Brady, presented the most literal interpretation of its title possible, placing a family of demons in suburban America. While TBS has had success with airing animated series, notable re-runs of popular Fox sitcoms like Family Guy and Bob's Burgers, it seems that the network wasn't interested in getting more than one season of Neighbors From Hell.

This Nickelodeon series created by Amy Winfrey is just delightful and will send you down the best YouTube rabbit hole.

Do you love Orange Is The New Black but spend your time wishing that instead of following human prisoners that the show would focus its storytelling efforts on penguins? Janet Perlman had the same idea, long before OITNB even existed. A single episode of Penguins Behind Bars aired on Adult Swim in 2003, but was not picked up for a full series order.

While other women in animation have strived for years to create adult-centric cartoons, Lisa Hanawalt is one of only a few names to succeed in that endeavor. Hopefully Tuca & Bertie's success will inspire other networks to take a chance on women-driven cartoons.