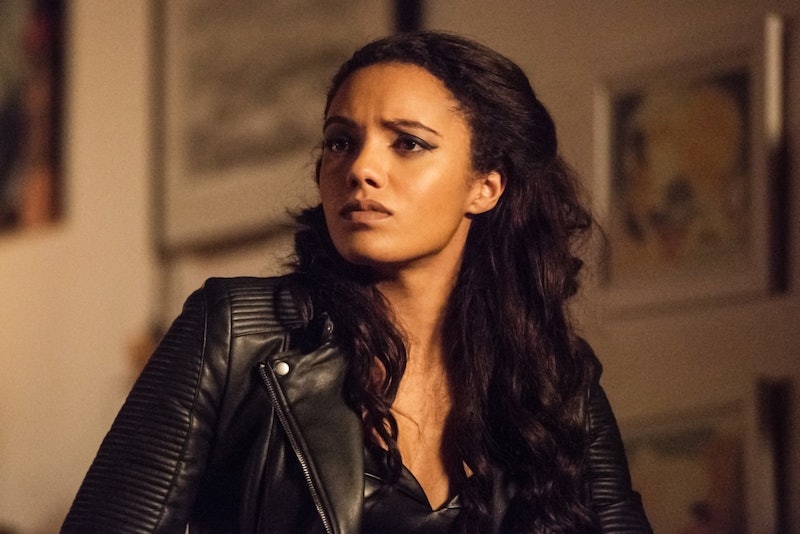 When the third season of Legends Of Tomorrow premiered Oct. 10, fans of the series are treated to returning teammates, White Canary, Firestorm, Heat Wave, Atom, and more, one-by-one. However, one of the Waverider's residents is noticeably absent. She isn't with the rest of the group during the season premiere, but will Amaya rejoin the crew on Legends Of Tomorrow, eventually? While it hasn't been confirmed one way or the other, there's one big reason why she definitely would rejoin the team: to save her family.

Before discussing the first episode of this new season, here’s a bit of a refresher on Vixen. Played by Maisie Richardson-Sellers, Amaya Jiwe (aka Vixen) was born in Zambezi, a tiny African village. Though she comes from a small place, her powers are a rather big deal. Besides her skills with bladed weaponry, as well as hand-to-hand combat, she’s got the Anansi Totem. That totem necklace imbues her with the strength of any animal, giving her the strength of rhinos, gorillas, and elephants, the swimming ability of dolphins, the eyesight of hawks, and more.

Before meeting the Legends, Amaya was originally on a different super-powered team. Back in the 1940s she worked with the Justice Society of America (aka the JSA), a secret organization of super heroic meta-humans dedicated to fighting Nazis and other threats. In the second season when the Legends met her, she quickly picked up the time traveling pastime and joined in as a member.

Her leaving, in large part, seems to be because of a souring of her relationship with Steel (aka Nate Heywood). The pair even discussed her staying permanently in the modern-era to live out their lives together. Despite the pair becoming close over the course of Season 2, at the beginning of Season 3 they have separated. Steel is seen going on a date with another woman, and he talks to several other Legends members about how he misses her and how they’re no longer seeing each other. Rip Hunter (the former Time Master and leader of the Legends) however, complicates the idea that Vixen simply broke up with Steel. He explains that she’s gone back to her homeland to serve her village as its guardian, in her actual timeline era of the '40s.

Although, it’s a bit heart wrenching to not know the actual details of how Steel and Vixen broke up, there’s intrigue in the unknown. What is known though, is that Vixen will return to the Legends in some way for multiple episodes this season. We know that for two reasons: Firstly, since Vixen went back in time and had children, that means the introduction of a new villain of the infamous Legion of Doom: Vixen’s granddaughter, Kuasa. Since Amaya went back to the past to protect her people, it would make sense for her to try to protect her granddaughter and keep her from going down the wrong path. Under those circumstances, she would have be willing to jump back into the future with the help of her biological family and for that matter - her super-heroic family, her Legends teammates.

Kuasa is not a new character in the Arrowverse. She has appeared on the animated series, Vixen. Kuasa isn’t even Vixen’s only granddaughter, besides Kuasa (a villain), there is also Mari (a hero). Both of whom would use the same totem as their grandmother to grant them the powers of the wildlife of the world. In an interview with Bleeding Cool, Richardson-Sellers discussed the idea the idea of her and her family members fighting on opposing sides. She said:

“I think it’s really fascinating for Amaya to see that one of her descendants could turn out to be evil. She knows she has to get back to her timeline because Mari needs to exist, but now she knows that if Mari exists so does Kuasa. It really shakes her up for the season.”

The second reason why it's clear that Amaya will be back in the fold is because Legends of Tomorrow producer Marc Guggenheim has indicated that the writers plan on intertwining the two series. In an interview with Entertainment Weekly, Guggenheim likened the two series' connection to the relationship between two recent Marvel films. He said:

"We’re very much beholden to the stories that were told in Vixen Season 2, and our approach is very similar to the Marvel movies where you didn’t have to watch Civil War to appreciate Spider-Man: Homecoming. You get a little bit extra, but they give you all the information that you need to watch that movie. You didn’t have to watch Civil War. It’s the same thing. I would love for everyone to watch Vixen Season 2, because I’m really, really proud of it, but we’ll provide all the information you need."

But even if Amaya does make a triumphant return, that doesn't mean she'll join back up with the crew for good. Legends Of Tomorrow has changed up its lineup a couple of times already. Hawkman and Hawkgirl are no longer around, and neither is Leonard Snart. Rip is still on the series, but not a member of the crew. So it remains to be seen whether or not Captain Sara and the rest of the Waverider passengers can tempt Vixen back into their time traveling crew.