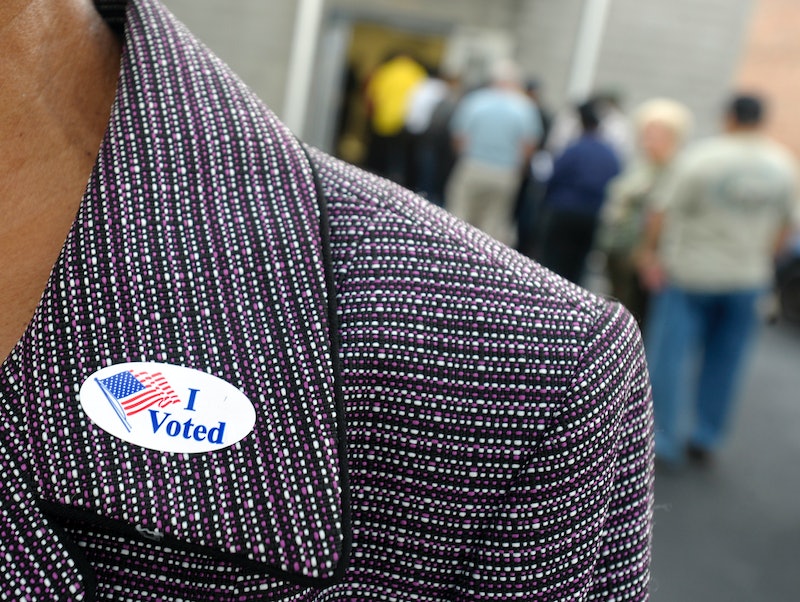 Former Vice President Joe Biden has been put forward by many as the candidate most likely to win against President Trump in 2020. With the first debates on Wednesday and Thursday, voters at home — and potentially candidates on the debate stage — may talk about "electability" and whether voters will elect a female president for the first time. And just before the debates kick off, a new report was released proving that when women and people of color are on the ballot, they are just as likely to win as anyone else.

The white men electability myth is just that: a myth, according to the report by the Reflective Democracy Campaign. Brenda Choresi Carter, the campaign's director, tells Bustle that "electability" has been used by white men in politics to their advantage — but there's no basis in fact. "We now know, of course, that's not true, but that belief and that myth has a lot of power still," she says.

The report, The Electability Myth: The Shifting Demographics of Political Power in America, shows that women, people of color, and particularly women of color are running for office and winning in unprecedented numbers. The data in the report shows not only are they running — but they win at the same rate as white men.

That's better than years past, but in proportion to the population, white men still occupy more seats at every level of government. Part of that is because this myth of electability kicks in even before the ballot box, Choresi Carter tells Bustle. It's not just voters who believe that white men are more likely to win, she says, but other power holders in the political process.

Choresi Carter pointed out that among the many barriers for women and people of color to even get on the ballot in the first place is "the power of political gatekeepers." Gatekeepers, she says, can be political parties, major donors, and organizations that endorse and support candidates.

"These are kind of the behind-the-scenes operatives that shape who can get on the ballot and run successfully," she says, adding that even the most engaged voters often don't get to see behind this curtain. Would-be candidates, though, need to navigate these stakeholders to be successful, she says.

"When they're deciding who to support for office, [gatekeepers] often support candidates who look a lot like them," Choresi Carter says, adding that many are white men themselves. "They also are influenced by this electability myth, this belief that anyone who is not a white man is a much more risky candidate."

For those wanting to help counter this, donating to organizations that work to recruit, train, and support women and people of color is an option, Choresi Carter tells Bustle. But even more important could be learning who the relevant gatekeepers are in your city or state.

"If they're over and over endorsing and supporting candidates who are white men — and you know who your party leader is in your local ecosystem — that is something you can actually influence," Choresi Carter says.

Choresi Carter tells Bustle that women of color uniquely experience the unequal way in which power is distributed in America, which has been debated publicly through movements like #MeToo and Black Lives Matter. "Women of color are really at the intersection of all of those things, so it's not surprising to me that they are stepping up and putting themselves forward for candidates of elected office to have a more powerful voice and seat at the table," Choresi Carter says.

None of this can easily be used to make predictions on the presidential race, though, she says, as there are just too many variables to make detailed predictions in such a complicated race. At the same time, the Reflective Democracy Campaign's research shows that voters across the political spectrum support more women and people of color winning office.

"They don't want the old boys club in office," Choresi Carter says. "They want change, and that's across the political spectrum."

It's also surely true of Democratic primary voters, she adds. Depending on who wins the nomination, the 2020 election could help defeat the myth once and for all.