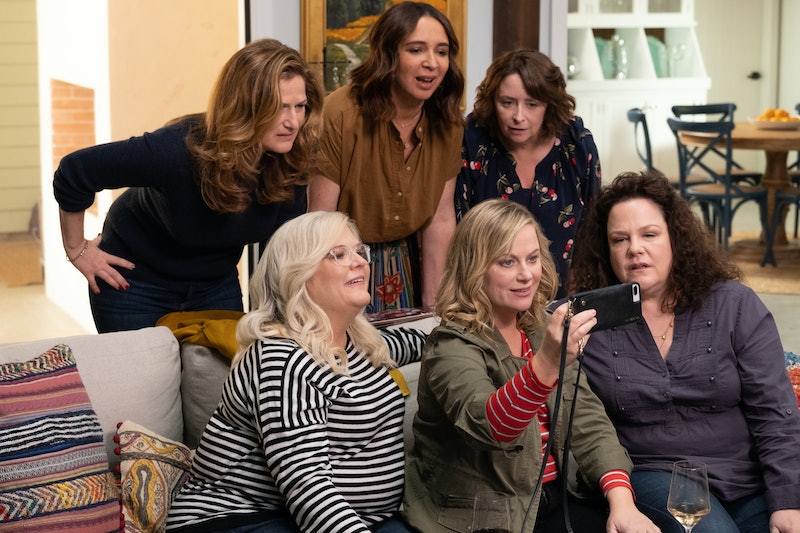 Nobody watches Saturday Night Live without ever wondering what it would be like to hang out with the cast. Sadly, not everyone gets to be a part of this tight comedian girl group IRL, but the upcoming Netflix movie, Wine Country, streaming on May 10, gives you a chance to see what that might be like. Wine Country is based on a true story, so it's almost like you're actually there with stars Amy Poehler, Tina Fey, Maya Rudolph, Ana Gasteyer, Paula Pell, and Rachel Dratch, getting drunk on a vineyard tour and having deep friendship talks.

In an interview with Vanity Fair, Poehler and Rudolph talked about some of the real events that inspired Wine Country, which Poehler directed. The comedy isn't just based on one particular trip, but a few that Dratch, Gasteyer, Pell, Wine Country screenwriter Emily Spivey, Fey, Poehler, and Rudolph went on in the past — because of course this fantasy group travels together pretty frequently. Two trips — one to Napa Valley for Dratch's 50th birthday and another to Palm Springs for Gasteyer's — provided some of the real shenanigans that made it into Wine Country.

Both trips sound equally fun and equally eventful, starting with the plane ride to Napa, when Poehler couldn't find her phone, thinking it had fallen into the toilet. As the actors recalled to VF, Rudolph was ready to take action, saying, "Let me get some gloves, I’m gonna look for that phone!" As if from an SNL sketch itself, Gasteyer calmly revealed, "Your phone’s in your bag. Don’t worry about it."

That near-disastrous phone experience helped shape Poehler's character Abby's storyline, as the overly stressed friend tries and fails to make Dratch's character Rebecca's 50th birthday party perfect. In an interview with The Hollywood Reporter, Dratch recalled that birthday trip which would ultimately become fodder for her new movie. "In real life, the trip to Napa and Sonoma County went according to plan, but in the movie, things go bonkers," Dratch said. But these women don't need any disasters to make each other laugh.

"We already have this common language where we can set each other up and — what’s that word in volleyball?” Rudolph asked Poehler while talking with Vanity Fair. “Alley-oop," Poehler responded. See? So many bits. Add in all of the wine that wine country offers, and it's a full-blown party. "These gals can hold their liquor, they’re not a bunch of wimps," Gasteyer said during an appearance on ET Canada with Dratch and Fey.

So, sure, things get messy and there are a lot of inside jokes. But the real friends also share a deep connection that leads to a lot of heart-to-hearts, like the ones you'll see in the movie. "We have fun light times and laughter and making each other laugh a lot, and then we can also talk about your deepest anxiety, and it’s a great balance that I look for in any friend," Dratch told ET Canada. If you look for that in your movie's too, then you'll want to catch this Netflix original.

More like this
Lindsay Lohan & Jonathan Bennett Celebrated Mean Girls Day Very Differently
By Jake Viswanath
12 ’90s Movie References You Missed In 'Do Revenge'
By Radhika Menon
What’s New On Netflix: Ana De Armas’ 'Blonde' & A Nick Kroll Special
By Arya Roshanian
These 25 International Horror Movies On Netflix Prove Fear Is A Universal Language
By Bustle Editors
Get Even More From Bustle — Sign Up For The Newsletter