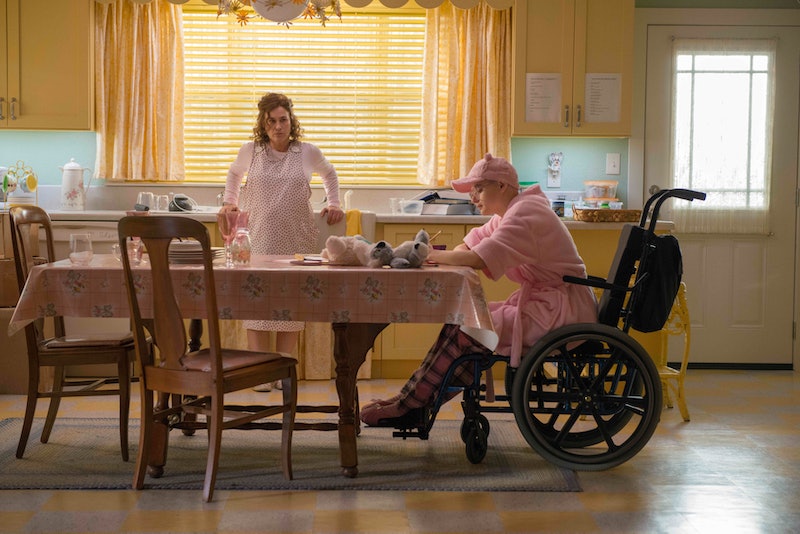 There's a moment in Hulu's new scripted true crime series The Act when an agent from Child Protective Services knocks on the door of the Blanchard home. Before letting her in, DeeDee Blanchard grabs a bottle of pills labeled "sleepy baby" and forces her daughter, Gypsy Rose, to take them. When Deedee tells the CPS agent that her daughter has severe developmental delays and relies on her for everything, Gypsy's slowed speech and lack of focus seem to reinforce those claims. The woman from CPS leaves, satisfied that Gypsy is safe in the capable hands of her mother.

If this is the first time you've been confronted by an onscreen depiction of Munchausen by proxy, you were likely horrified by this scene, just as you were horrified to learn that despite what her mother claims to the world, Gypsy doesn't need a wheelchair, doesn't have a sugar allergy, and doesn't actually need a feeding tube. But more likely, this was far from the first time Munchausen by proxy has come across your radar. That's because from The Act to Phantom Thread; Sharp Objects to Everything, Everything; and Law and Order: SVU all the way back to The Sixth Sense, Munchausen by proxy is becoming increasingly popular in Hollywood projects — and medical professionals say that's a good thing.

It's easy to understand why Munchausen by proxy has captured the imagination of Hollywood. According to Dr. Marc Feldman, a Clinical Professor of Psychiatry and Adjunct Professor of Psychology at the University of Alabama and a Munchausen by proxy expert, these cases are "intrinsically sensational," because the perpetrators are often the very last people we would suspect of hurting a child.

"In Munchausen by proxy, the perpetrator, which is almost always the mother, feigns, exaggerates, or actually induces illness in her child with the goal of getting attention and sympathy and concern that she feels unable to get in any other way," Dr. Feldman explains, calling the abuse a "perversion of mothering." Feldman, whose new book Dying to Be Ill: True Stories of Medical Deception, covers the real-life Blanchard case upon which The Act is based, emphasizes the seriousness of the abuse. "In published reports, [Munchausen by proxy] has a mortality rate between six and nine percent, which may make it the single most lethal form of child abuse."

In the case of Gypsy Rose Blanchard, this abuse manifested in her mother's insistence that she had all kinds of serious illnesses and disabilities, from leukemia, to multiple sclerosis, to a sugar allergy, to digestive problems that necessitated a feeding tube, to a developmental delay that left her with the mind of a 7-year-old child. All those claims were revealed to be false in Michelle Dean's groundbreaking BuzzFeed report. Other than side effects from medications unnecessarily administered by her mother, Gypsy was a perfectly healthy young woman. And ultimately, in a bid to escape from her mother's abusive behavior, Gypsy and her boyfriend Nicholas Godejohn conspired to murder Deedee.

The 2015 murder, subsequent trial of Gypsy and Godejohn, and the 2016 BuzzFeed piece led to such a national buzz that Dr. Feldman credits the Blanchard case with helping to increase Hollywood's interest in telling stories of Munchausen by proxy. And though that's tough to prove, there have been quite a few notable projects in which characters display Munchausen by proxy-like behaviors that have debuted in the years DeeDee's murder. There's 2017's Phantom Thread (in which a woman poisons her partner in order to maintain control over him), 2017's Everything, Everything (in which a mother convinces her daughter she has a disease that doesn't allow her to venture outside of her home) and most notably, 2018's Sharp Objects (in which a mother has caused the death of one her daughters via poisoning and continues to administer medicines to her youngest child — though that series was based on a novel written by Gillian Flynn in 2006).

But Dr. Feldman also notes that it was really true crime books, beginning with Nancy Wright's 1984 work A Mother's Trial, that first elevated Munchausen by proxy into the national consciousness, though not necessarily into the Hollywood mainstream. A Mother's Trial is an in-depth look at the case of Priscilla Philips, a woman suspected of poisoning her two adopted children, one of whom died as a result of her mother's attentions. "There have been a ton of true crime books [about Munchausen by proxy]," Dr. Feldman says, noting that these books came "before Hollywood picked up on it and started dramatizing cases."

If there's a movie that most often gets credited for introducing Munchausen by proxy to a wider audience, it's the 1994 M. Night Shyamalan film The Sixth Sense. Over the course of the movie, it is gradually revealed that Mrs. Collins poisoned her daughter, Kyra (played by Mischa Barton), to get attention and sympathy, though fans of the movie know that is far from the biggest revelation the film has to offer. But a significant difference between The Sixth Sense and more modern portrayals of Munchausen by proxy is in their significance to the plot. "It seemed to me in [The Sixth Sense] that Munchausen by proxy was thrown in for no good reason," Dr. Feldman says. "I saw the movie and I didn’t understand why they bothered with that particular subplot."

By contrast, recent shows like The Act and Sharp Objects have made Munchausen by proxy, and the subsequent fallout from that form of abuse, a central part of the plot. And while some viewers may feel uncomfortable watching mothers like DeeDee and Sharp Objects' fictionalized Adora essentially poison their daughters onscreen, Dr. Feldman insists that over the 30 years he's been studying Munchausen by proxy, the cases are often truly that severe. By depicting them on screen, Dr. Feldman has hope that shows like The Act can actually raise awareness about the signs of child abuse via Munchausen by proxy.

"I’ve written five books and over 100 articles about Munchausen by proxy and related conditions, but it's a limited audience they reach," Dr. Feldman says. "Right now, Munchausen by proxy is having a moment [onscreen]. Everybody’s talking about it. I just hope it doesn’t entirely fizzle out and go away. I think there’s a real opportunity here for public education."

In the case of Munchausen by proxy, public awareness and education, even via Hollywood, can have life-saving consequences for the survivors. Dr. John Mayer, a clinical psychologist with a focus on children and young adults, notes that in the vast majority of cases, doctors treating Munchausen by proxy victims fail to identify that their patients are being abused.

"In child abuse cases, this is horrible to say but it’s very true, sometimes physicians don’t want to take the time to check into a possible abuse case when it’s very apparent that this child is being physically abused," Dr. Mayer says, noting that many hospitals have a "six-minute rule" that requires them to get patients in and out the door within a very short time frame. "It’s very common that physicians will miss these things because they’re not asking the right questions, and they’re not trained [to prioritize that]."

Dr. Feldman concurs that most Munchausen by proxy cases go unnoticed by medical professionals, though he has some additional theories as to why these patients slip through the cracks. "I was taught in medical school that the single best indicator of what’s going on with a patient is what their family tells you about the history," he explains. "We’re not taught to question what we’re being told, and that may be especially true in pediatrics, where you naturally often have to rely on the parent for the history." This causes many doctors to believe abusive mothers when they recite a list of their child's ailments, according to Dr. Feldman.

While Hollywood is often under fire for its inaccurate or sensational portrayals of mental illnesses like borderline personality disorder and bipolar disorder, when it comes to depictions of Munchausen by proxy, Mayer and Feldman say the big and small screen adaptations have mostly gotten it right. They also accurately and sensitively portray the trauma felt by Munchausen by proxy survivors long after the abuse ends. Sharp Objects spent much of the series dealing with the fallout felt by both Camille (who struggles with addiction and self harm) and Amma (who turns to hurting others) from their abuse at the hands of their mother, Adora. Meanwhile, The Act demonstrates how DeeDee's abuse has caused Gypsy to be emotionally stunted as she becomes increasingly desperate to find a way to escape her situation.

Dr. Feldman works with some real-life survivors, and says that the mental health struggles dramatized in The Act and Sharp Objects are true to life. "I know a bunch of victims who have watched The Act, the first two episodes, and they are finding it traumatizing in some ways, though they’re glad it’s on, educating others," he says. "A lot of them have post-traumatic stress disorder, not unexpectedly." He notes that many of these survivors later develop Munchausen themselves (making themselves ill to receive attention) or are crippled by a debilitating fear of hospitals and medicine. By portraying the real-life struggles of these survivors onscreen, Hollywood reminds viewers that though they may be perversely entertained by a sensational case, there are severe consequences for those who have really lived through it.

Though Dr. Feldman is mostly pleased with how Munchausen by proxy is portrayed onscreen, he does worry about The Act's attempts to humanize DeeDee. "In The Act there seems to be quite a loving relationship in some ways, and DeeDee is solicitous and nurturing [to Gypsy] in her odd way even when nobody’s watching," Dr. Feldman says. "That I think is a little unusual. Mostly these mothers view their victims... as objects to be manipulated as opposed to children to be loved and embraced. They are a means to an end." He adds that he was "put off" by the show's attempts to show a bond between mother and daughter, and that while he understands that "it would make for more engaging television if they made [DeeDee] seem to be conflicted in such a basic way, conflicted between love and manipulation," it's not an accurate portrayal, in his experience.

But whatever the reason we want to keep watching The Act or couldn't stop talking about the finale of Sharp Objects, it seems these big and small screen portrayals are doing more good than harm. And both Dr. Mayer and Dr. Feldman expressed their hope that these Hollywood adaptations continue. "There’s great benefit by Hollywood portraying these situations and bringing them to our awareness," Dr. Feldman says. "I support it wholeheartedly."