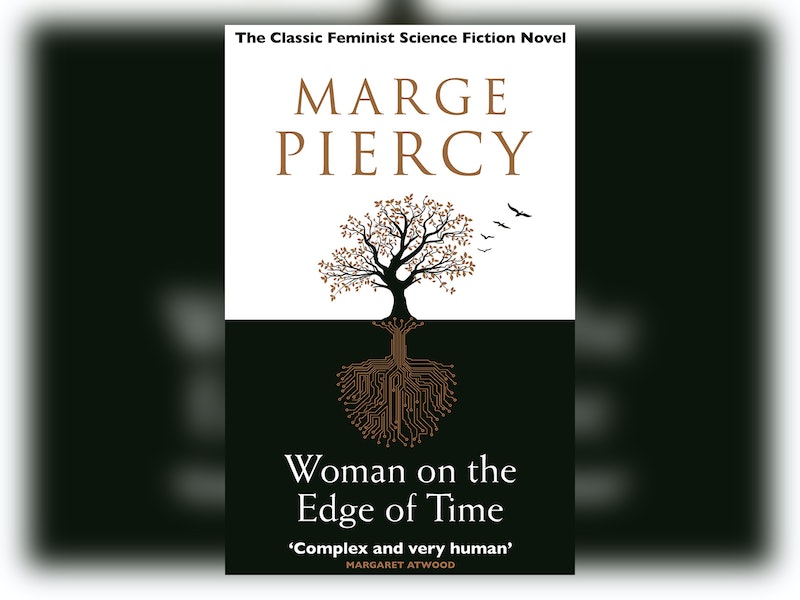 Between The Handmaid's Tale and The Hunger Games and the current state of politics in America, we're in a bit of a dystopian renaissance. 1984 is back on the bestseller list and it seems like new dystopia novels are hitting the shelves every other day. We've seen futures where women lose all their rights, futures where police states rule with iron fists, futures where rebels are imprisoned against their will for telling the truth—and as long as we're bringing back all the dystopian classics, it's time for a second look at Marge Piercy's Woman on the Edge of Time.

Woman on the Edge of Time is not exactly a new novel and it's not exactly a dystopian novel: it was first published in 1976, and the speculative future it depicts is a good old fashioned utopia. Our main character discovers that she can communicate with a figure from the year 2137, from a world without sexism or racism, where gender is fluid and everyone recycles.

The "dystopian" part of the book takes place firmly in the present.

That's where Consuelo Ramos lives, in the "present day" of New York in the '70s. She's in her mid-thirties and just barely scraping by. Her husband is dead, her only daughter has been taken by the state, and years of struggling with mental illness have left her impoverished. She's stuck in a labyrinth of welfare and custody battles with no way out.

Woman on the Edge of Time by Marge Piercy, $13, Amazon

At the start of the novel, Connie is trying to protect her pregnant niece, Dolly, from an abusive boyfriend, who wants Dolly to have a back alley abortion. Connie is her last hope. And in one of the most nauseating fight scenes in all of science fiction, Dolly's boyfriend beats Connie unconscious, forces his girlfriend to lie to the police, and has Connie placed in forced detention in a mental institution. The authorities believe that Connie attacked him, given her history of mental illness, and no one will treat her serious injuries from the fight.

So that's where we are. We haven't even gotten to the sci-fi part, and already Connie's life is a dystopian nightmare. Some of the more harrowing aspects of the mental hospital are dated, it's true, but Connie's situation is certainly not outlandish or science fictional: she's a woman who has been failed by the healthcare system, failed by the police and the foster care system, and horrifically abused by a hateful misogynist. No one listens to her side of the story.

Also, she can talk to the future.

Connie has been contacted by an androgynous young person called Luciente from the year 2137. Luciente's future is also a bit dated. It's definitely a vision of a perfect world that was written in 1976. But it's also a hell of a lot better than our present: The communal community of Mattapoisett lives without environmental pollution, without class or race hierarchies, and without a strict gender binary. Each child is raised by three "mothers" of various genders and gets to choose their own name. Good mental healthcare is widely available and de-stigmatized. There are intelligent dolphins and aliens. People are way into farming.

At first it seems like Marge Piercy just wants to share her vision of a super fun and chill future with all of us, but Luciente slowly reveals to Connie that this lovely world of gender-non-conforming farmers isn't the only possibility. There is another possible future: A hyper-capitalist world where women are essentially sex slaves, the environment is destroyed beyond repair, and the wealthy elite live on space platforms, leeching off the poor. And unless Connie is able to stop her doctors in the present from developing horrible mind-control technology, this is the future that will come to pass:

"Suddenly she thought that these men believed feeling itself a disease, something to be cut out like a rotten appendix. Cold, calculating, ambitious, believing themselves rational and superior, they chased the crouching female animal through the brain with a scalpel. From an early age she had been told that what she felt was unreal and didn’t matter. Now they were about to place in her something that would rule her feelings like a thermostat."

Luciente's future isn't entirely perfect, either. There are still wars, still groups of people trying to dominate each other out in the world beyond Mattapoisett and its fellow communities. People still have disagreements (although the winner of each major dispute is required to throw a party for everybody to avoid lasting grudges). But Connie decides to put her own life on the line in the present for even a chance at this distant future, a possibility that at some point, some part of humanity will chose kindness and farming over bigotry and greed.

That's where Piercy's novel goes from distressing to truly agonizing, though, because she refuses to give us any definitive proof that the Mattapoisett future is real. We don't know whether to believe that Connie is genuinely communicating with the future, or simply wishing this world into existence. A brief perusal of the Goodreads reviews of Woman on the Edge of Time, and you'll find that many readers hate this ambiguity, and that some readers find Connie "insufferable" because she is "unstable" or "doesn't work hard enough."

But that, I think, is part of Piercy's point: We're not supposed to know if Connie is truly speaking with the future. Connie has so few options, and yet she (SPOILER ALERT) risks her life to stop a lobotomy-esque mind control operation that would be forced on her and other women in her position. She does this with no guarantee that it'll save the future. She doesn't even have a guarantee that Mattapoisett exists outside her own brain. But Connie is able to imagine a future where life is better than her dystopian present, and that's all she needs. It's the idea of utopia, however tenuous, that spurs Connie to fight back in the present.

Piercy flips the typical dystopia novel on its head by making reality the nightmare world that must be escaped. She throws back to old school utopia novels with her lengthy, brochure-style depiction of a perfect society. But she also sows a seed of doubt that ultimately grows into a call to action: We never know if our actions in the present are really going to bring about a better future. We have no guarantees. As long as we can imagine a better future, though, we have to try. It's all we can do.

And we could all use a vision of utopia now and then.