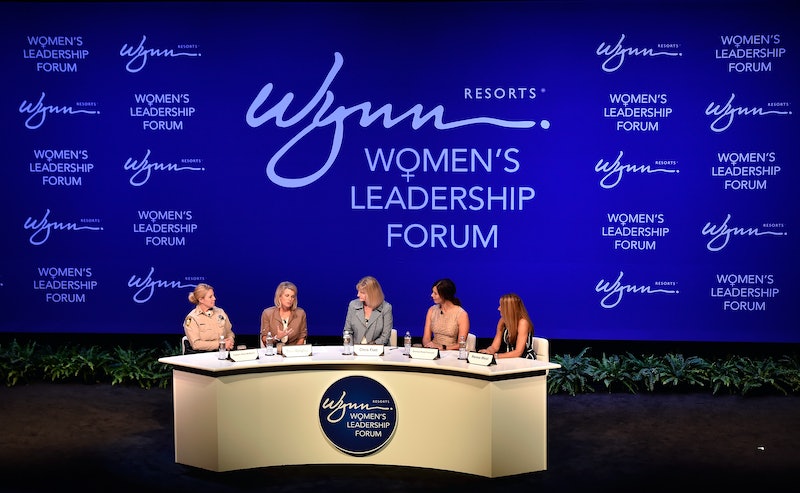 Public opinion surveys aren't binding declarations, but they can be enlightening ways of discovering new things about the way people see the issues — and each other. According to a new Pew Research Center survey on leadership in business and politics, the public thinks that women are better leaders than men overall — although many people also say that they don't see a difference between female and male leadership styles.

The Pew Research Center report, which is called Women and Leadership 2018, asked participants about how they regarded men's and women's leadership generally, and then asked whether men or women were better in a series of different specific leadership traits. The lists of traits were slightly different for business and politics, but they both included traits like "being compassionate and empathetic," "being honest and ethical," and "standing up for what they believe in."

In the politics traits, survey participants considered women to be superior in seven out of nine traits. In one trait, "working well under pressure," they were tied. And in one, "being willing to take risks," men came out on top. On the business lists, men fared better than women in three out of 12, but people saw women as markedly better in the other nine.

It's important to note, as the Washington Post did, that significant percentages of people also didn't think that men and women were any different when it came to the traits listed. Pew also asked participants how important they considered each trait to be for leadership overall, so not each was weighted equally. For example, 31 percent of people thought that women had the edge when it came to "being honest and ethical" in politics, compared to four percent who thought that men were better in that realm — but 91 percent thought that it was necessary in political leaders.

When it came to how people ranked those leadership traits in terms of importance, there were also some differences between men and women — although Pew noted that both genders were in agreement on the top four most important traits, at least when it came to politics: being honest and ethical, working well under pressure, being able to work out compromises, and standing up for what they believe in (women were regarded as better in all but working under pressure, in which men and women tied). With other traits, though, one gender clearly marked them as more important the other. The biggest difference was with maintaining a tone of civility and respect, which 75 percent of women saw as important, whereas only 61 percent of men did.

With the overall results that women came out on top when it came to leadership qualities overall, perhaps it's no surprise that another Pew survey in August found that most of America is glad that more women are running for Congress in the 2018 midterms — 61 percent, to be exact. In that case, though, there were significant differences in what men and women from the Democratic and Republican sides stood on that question.

Democratic men and women were highly likely to believe it was a good thing that more women are running for Congress, at 75 and 83 percent, respectively. Republican men and women, however, only agreed with that statement at rates of 34 and 45 percent. When the midterms come around in November perhaps these views will be reflected in how the results turn out for male and female candidates.