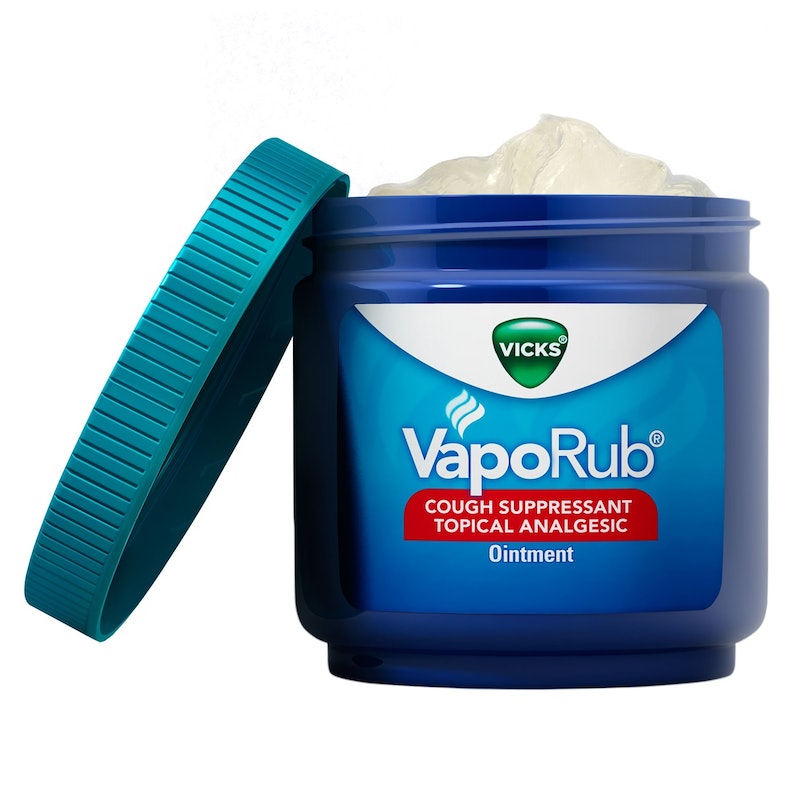 It's hard being a vagina. They do so much for us — they help guide our menstrual flow, give us sexual pleasure, and occasionally serve as baby highways, guiding fully formed humans from their mother's womb into the big, scary world — and what do they get in return? They get hot wax poured around their outsides to get rid of hair, have expensive jade eggs shoved up inside them, and some of them, it seems, are periodically smothered in cough suppressant ointment.

According to the U.K.'s Sun newspaper, a number of online forums have suggested women use Vicks VapoRub on their vagina "as a way to boost your sex life, soothe itching, clean your intimate areas" and "maintain odor" down there. But according to experts, these claims are not only untrue, they're potentially harmful.

First of all, vaginas are self-cleansing (yet another amazing thing they do for us!). They naturally produce a mucus-y discharge which keeps them clean and healthy by trapping and getting rid of any unwanted bacteria. And if you do want to help them along, maybe after a particularly sweaty day, the most that's recommended is using warm water and a mild soap on the outside of your genitals. Anything stronger, like scented soaps, cleansers with synthetic chemicals, or worse, a douche, can mess with the delicate pH levels of the vagina, and make it more susceptible to infection by stripping it of healthy bacteria which help keep it clean.

As for the claim that its minty, tingly feeling could heat stuff up in the bedroom if applied to the clitoris or the penis? That tingly feeling could quickly escalate from a pleasant prickle to a full-on forest fire in your underpants. Or, as one woman who made the mistake of applying Original Source mint shower gel to her yoni described the sensation: "7,927 tingling leaves which will accost your genitalia until it screams for mercy." And this feeling could last for hours, because the ointment is difficult to wash off. So, if you'd like to spice things up, stick to tingling-sensation lubricants which were specifically designed for use on your genitals. Experimentation in the bedroom is great, but not so much when it involves potentially toxic chemicals.

Finally, let's look at the claim that Vicks will help "maintain a pleasant odor down there." There's really only one response to this, and though it's fairly straightforward, it's a message that's easily forgotten in a society that tells us vaginas should basically be sterile, floral pleasure holes for men. Here it is:

Shout it from a rooftop, tattoo it on your forehead, have it printed on business cards that you hand out to people on the street — do whatever you need to do to get the message out. Unless your vagina has an especially strong odor, which could signal some sort of infection (read about some common vaginal odors here), your vagina smells fine. Vaginas are not bouquets of flowers, or delicate pastries, or minty cough suppressants. They are human genitals made up of flesh and mucus and bacteria and sometimes they fill with blood and they're right next door to our pee-hole and pretty close to where we poop, too. And all of that is good and great because that's exactly what they're supposed to be.

There is a culture of shame surrounding women's vaginas. We are told that vaginas are icky, and we're urged to shave, wax, bleach, douche, and even get plastic surgery on their genitals to make them (supposedly) more palatable. This shame spills over into so many aspects of our lives — it's often expensive, unhealthy, and for many people, it affects their ability to have satisfying sexual experiences. This shame is more than just the moral leftovers from our country's puritan founders, it's a way of repressing people with vaginas, of telling them they are fundamentally flawed, and that it is their responsibility to make themselves consumable for men.

But here's the thing: vaginas are fine. Your vagina is fine, RIGHT NOW. You don't need to do special exercises or smear cream on it or whatever. It is beautiful and great and doing its job, and if your partner is grossed out by it, kick them to curb immediately because you don't need that noise in your life. Celebrate your vagina, love your vagina, and please, whatever you do, don't put VapoRub on it.