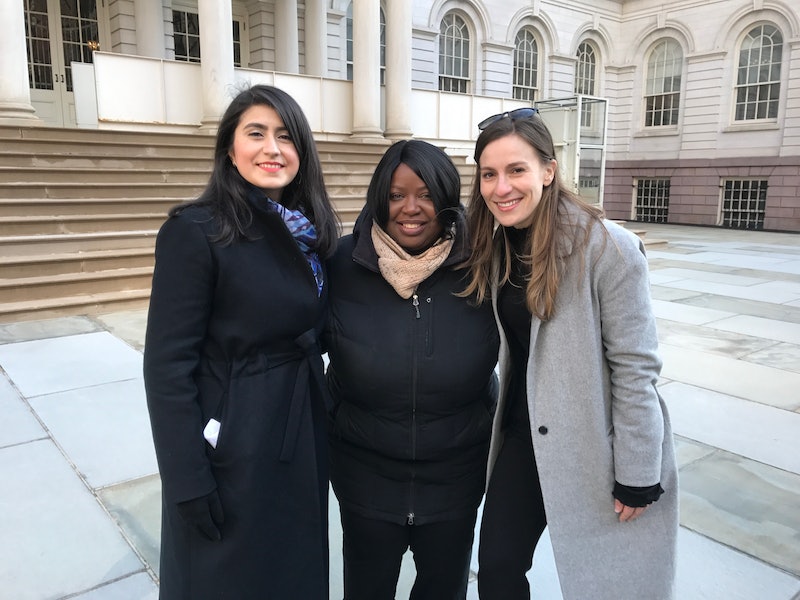 Amanda Septimo was the first person Catalina Cruz texted when she saw an all-male panel on Univision Nueva York debating why more women don't hold elected office in the United States earlier this month. The two women, new friends each running for statewide office in New York, weren't only frustrated by the irony of men discussing obstacles women candidates face; Cruz was also hurt by a comment asserting she can't win a State Assembly seat in Queens because she wasn't born there.

"For an immigrant to be told, 'You’re not good enough because you weren’t born or raised there,' it’s a very tough thing to hear," Cruz tells Bustle, frustration building in her voice while thinking back to the segment. "Having [Amanda] at 11 o’clock at night actually answer a text message — when I’m basically in my head screaming, 'Oh hell' — it was very helpful to calm me down and walk me off a ledge."

We have to be each others’ biggest cheerleaders if we’re going to make sure that we have equal representation in government at every level.

With a record number of women running for office this year, first-time candidates are forming friendships to help one another navigate uncharted territory. Like Cruz and Septimo, many are insurgent candidates without traditional party support. Instead, they're building their own support systems to commiserate about the struggles of campaigning and build each other's confidence.

"As much support as you may have from folks around you, nobody knows how grueling, how lonely, the process of running for office can be other than somebody else who’s actually ran," Cruz tells Bustle.

Changing The Face Of Politics

Cruz first met Septimo in January at the NYC Young Women's Political Leadership Conference, though they didn't exchange numbers until months later when they kept running into each other while interviewing with local organizations for potential endorsements. Cruz, who moved to the U.S. from Colombia when she was 9, is the first Dreamer to run for statewide office in New York. She knew Septimo, who is running for a New York State Assembly seat in the Bronx, would understand her anger because their campaigns have a lot in common as young women of color transitioning from behind-the-scenes government careers to bids to unseat Democratic incumbents in Albany — as well as to increase female representation in politics.

Nationwide, just 25 percent of state legislators are women, according to the Center for American Women and Politics (CAWP) — and that number drops to just 23 percent for state senators. The situation is even worse in Congress, as only 20 percent of members currently serving on Capitol Hill are women.

"One impact of male-dominated institutions is that there’s lots of signals, often not intentional, on the part of existing politicians about who belongs in that space," Mary Nugent, a PhD candidate who teaches politics at Rutgers University, tells Bustle. "That’s a really tough environment to be in for a lot of people — a lot of women, people of color, especially women of color. So cultivating an alternative sense of belonging — an alternative way you can feel like you belong there — and having other women who probably inspire you... I think is really helpful."

Cruz and Septimo say their friendship has also filled in for the support they lacked from the Democratic Party — especially before they each had endorsements from other Democratic elected officials. The same was true of Naval Academy grads Amy McGrath, Elaine Luria, and Mikie Sherrill, who recently became friends as they each run for Congress in different states. When McGrath first announced her bid to unseat Kentucky Republican Rep. Andy Barr, she did not have the support of the Democratic Congressional Campaign Committee, who instead encouraged Lexington Mayor Jim Gray to run, as The Lexington Herald-Leader reported. But she did have the support of her fellow Naval Academy alums.

"Elaine and I especially knew her background, and knew she came from the Naval Academy," Sherrill, who's running for Congress in New Jersey's 11th district, tells Bustle. "The first female Marine Corps fighter pilot to go into combat: that’s somebody you want on your team."

McGrath ultimately defeated Gray in the May primary, becoming the Democratic nominee in a competitive district Democrats hope to flip in November, and Sherrill and Luria won their respective primaries as well. McGrath's campaign declined Bustle's request for comment.

McGrath and Luria (who's running in Virginia's 2nd Congressional District) were both in the Naval Academy's class of 1997, overlapping with Sherrill for one year before she graduated in 1994. They didn't all connect until this election cycle, though. Sherrill says she and McGrath first got in touch through mutual friends and eventually met at an event in Boston, while she and Luria met up for the first time at an event for women candidates in New York.

"This system wasn’t built for us," Jessica Ramos, who's running for New York State Senate in Queens — and who struck up a friendship with Alessandra Biaggi, a fellow Democrat running for New York State Senate in the Bronx — tells Bustle. "We have to be each others’ biggest cheerleaders if we’re going to make sure that we have equal representation in government at every level."

Ramos and Biaggi met at an event organizing against a group of Democratic state senators who aligned themselves with their Republican colleagues. Both Ramos and Biaggi are challenging Independent Democratic Conference (IDC) members in New York's Sept. 13 primary.

The IDC's eight members gave Republicans control over the state budget by supporting the Republican Senate majority leader. Though they effectively disbanded in April, Ramos and Biaggi are vying to give Democrats a true majority and thus champion progressive legislation. The group's leader, Bronx Sen. Jeff Klein, is Biaggi's opponent — and was accused earlier this year of forcibly kissing a female staffer in 2015 (which he denies). Should Ramos and Biaggi be elected, they would change the shape of the state's Democratic party.

"You Got This, Girl"

The six candidates Bustle spoke to say their relationships with other women running for office are more about building each other up than about strategizing. It's no secret that women running for office face obstacles that men in the same position just don't — from comments about their appearance or age, to questions about their qualifications. But women are also conditioned from a young age to doubt their abilities. A 2013 study by Jennifer Lawless and Richard Fox, experts in gender and political ambition, found that boys are more likely than girls to be socialized by their parents to think about politics as a potential career, more likely to be encouraged to run for office, and more likely to believe they will be qualified to run for office one day.

Fox found similar results when surveying men and women with careers in law, business, and education — professions that Fox says yield the highest proportion of political candidacies. Just 7 percent of women said they have seriously considered running for office, compared to 16 percent of men.

"If you’re told you don’t belong in a space, then it’s harder to believe that you’re qualified and that you should be there," Nugent says.

That's why the candidates Bustle spoke to often send each other messages like "we got this" and "keep your head up." Cruz says she and Septimo will simply text each other: "Go do trains," meaning go hand out campaign flyers at the train station. She recently sent Septimo a photo of her doing just that to prove that the motivational messages were getting the job done.

And as the midterm elections creep closer and closer, they're also making their friendships more public, just as you might any relationship that's carried on for a few months. The last text Cruz sent to Septimo when we spoke last month joked about cementing their friendship online: "Let’s make it Facebook official."