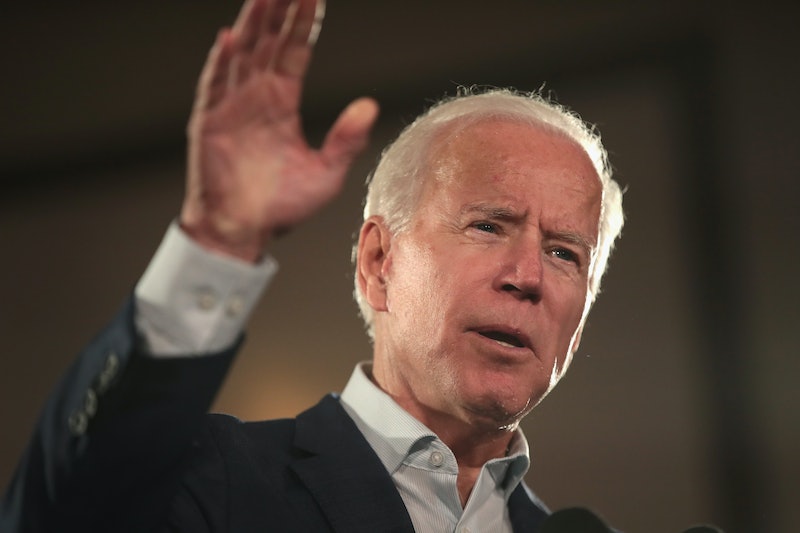 The former vice president is embroiled in a controversy about whether he's been overly intimate when interacting with women, and his attempt at damage control may not have improved the situation much. Three new people came forward on Thursday, telling The Washington Post that Biden made them feel uncomfortable. These women say Joe Biden's response video dissatisfies them.

Ally Coll, one of the most recent women to speak out, told The Post that Biden's statement showed "a continued lack of understanding about why these stories are being told and their relevance in the #MeToo era." Coll said she was a Democratic staffer in 2008 when Biden squeezed her shoulders, leaned close to her, praised her smile, and held her "for a beat too long."

Seven women altogether have accused Biden of touching them inappropriately. They say he made them uncomfortable by doing things like smelling their hair, resting his hand on their thigh, and holding his forehead to theirs. In response, Biden put out a video statement on Wednesday in which he neglected to apologize. "I will be more mindful about respecting personal space in the future" and that "social norms are changing," he said.

Biden said he's often used physical contact to foster connection. What "won't change," he said, is that he'll "always believe that governing — quite frankly, life, for that matter — is about connecting with people."

His video hasn't been entirely well-received. Some people have argued that Biden's statement was patronizing toward the #MeToo movement and that he didn't genuinely confront how his behavior may have always been misguided, instead foisting responsibility on changing "social norms."

In that vein, four of the seven women who accused Biden have said that they find his response inadequate, according to The Post. Sofie Karasek told the outlet that she was uncomfortable during an interaction that was photographed and celebrated around the 2016 Oscars. Biden pressed his forehead to hers, and although Karasek said she was grateful for the support, she also told The Post that it had caused her discomfort to have their faces so close together. She argued that Biden's video "still didn’t take ownership in the way that he needs to."

"He emphasized that he wants to connect with people and, of course, that's important," Karasek said. "But again, all of our interactions and friendships are a two-way street... Too often it doesn't matter how the woman feels about it or they just assume that they're fine with it."

Vail Kohnert-Yount also told The Post that Biden held his forehead to hers when she was an intern at the White House in 2013. She said she was "shocked" when he called her a "pretty girl."

"I appreciate his attempt to do better in the future," Kohnert-Yount said of his video, "but to me this is not mainly about whether Joe Biden has adequate respect for personal space. It's about women deserving equal respect in the workplace."

D.J. Hill, who previously came forward saying that Biden had made her "very uncomfortable" in 2012 by touching her shoulder and then drifting his hand down her back, said in a Wednesday interview with Fox News @ Night that she wasn't satisfied with Biden's video.

"It's one thing to say it," she said. "It's another thing to show actions [that demonstrate] that you're moving toward what you say this self-realization is about."

Biden is expected to announce that he's running for president in 2020. If he does, he will likely be asked to provide additional proof that he's changed his behavior and improved his understanding of women's personal boundaries.