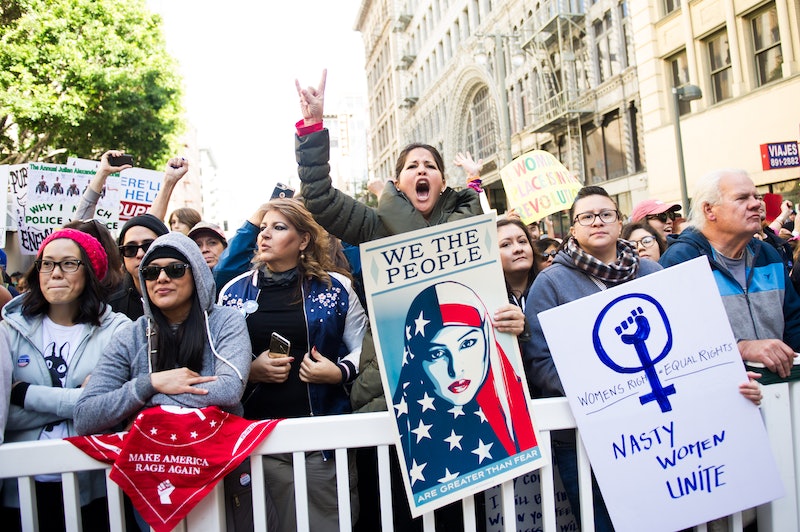 As women and men stormed the country at Women's Marches nationwide Saturday, a prankster from the alt-right concocted a dastardly plan: Advertise a fake march that wasn't actually happening, thus convincing a bunch of Berkeley women into coming out for a protest that didn't actually exist. Brilliant! Except not: Hundreds of people showed up for the fake Berkeley Women's March, realized it was a prank, didn't care, and started marching in earnest against President Trump. It's rare that something so conceived with such malice ends up producing such a heartwarming result.

According to Berkeleyside, somebody identifying themselves as Sam Cox advertised the march on the Action Network and Women's March Bay Area websites, though the latter listing was later taken down. Protesters were instructed to show up at Memorial Glade, a popular spot on the UC Berkeley campus, at noon on Saturday.

But as protesters started to trickle in, they slowly realized that nobody was actually organizing anything. Then, the event page was modified — suddenly, "Pepe The Frog" was listed as the organizer, accompanied by an image of Pepe — a cartoon appropriated by the alt-right — giving the middle finger.

Protesters who registered online received a text message in Russian:

"I pranked many Americans!," the message said. "Hahaha. Not surprising that people [do] don’t have such low test scores and one of you got this right/privilege that I am Russian national. ha ha haha. Goodbye!”

When the protesters realized they'd been victims of a prank, they did something the troll apparently hadn't considered: They turned it into a real protest.

“As noon approached at the entrance to Doe Library, a couple of women stood up and spoke to the crowd (without a mike, so not easy to hear), to let them know they were not the organizers, but were stepping up to get things going,” protester Rachel Bradley told Berkeleyside. “Everyone was full of energy and ready to march, so we proceeded along the path described by the self-appointed leaders ... chanting, waving signs, and generally acting like the protesters we all came there to be.”

Whoops! The troll's plan would have been lame regardless of where he tried to pull it off, but executing a prank of this nature in Berkeley is a whole different level of stupidity. I've lived in Berkeley for many years, and popular protests are deeply embedded in this city's genes. It stretches back to the 1960s, when the university became a national epicenter for protests against the Vietnam War, racial discrimination, and restrictions on civil liberties. That spirit never left Berkeley, as evidenced by the Occupy protesters on campus in 2011.

Add the fact that Berkeley is already a super liberal city, and the chances that this troll's prank would succeed were approximately zero.

“We walked through campus and down Hearst and around Oxford and then back to where we began at Memorial Glade," protester Cori Kesler told Berkeleyside. "Upon return, it was apparent that our group had more than doubled and someone had run home to bring their personal amplifier so we could continue the march with chants, speeches, and song. The man who supplied the amplifier ended our demonstration by singing a gorgeous and rousing rendition of Man of LaMancha’s 'The Impossible Dream.'"

What started as a mean-spirited prank ended with hundreds of likeminded Americans coming together in solidarity to let their voices be heard. Well-done, anonymous troll.