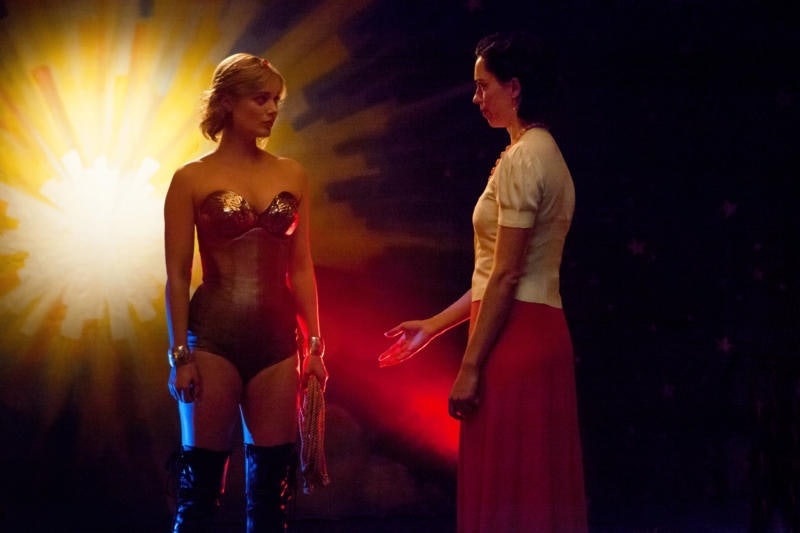 She topped the list of the most popular Halloween costumes for 2017; her movie conquered the summer box office with undeniable fervor; and she is the most popular female superhero. But Wonder Woman, with her golden lasso, her unwavering morals, and her army of female fighters, is an extremely flawed feminist hero. But according to Angela Robinson — writer and director of the film about Wonder Woman's inception, Professor Marston and the Wonder Women — you still have every right to love her.

The film, out Oct. 13, stars Luke Evans as Professor Marston, Rebecca Hall as his wife, and Bella Heathcote as their mistress; the story follows their polyamorous relationship, which, along with Marston's own theories, inspired the creation of the now-iconic superhero. And while in 2017, Wonder Woman is synonymous with independence, empowerment, and girl power, her origins, as the film explores, are not so easily defined as such.

Her problems are obvious: She is almost always scantily-clad for the benefit of the male gaze, for one, and she is often (at least in the early comics) seen being tied up or tying up others. Bondage is a huge element to the early storylines of Wonder Woman — sexualizing this heroine for the benefit of a male audience — but as the film suggests, there's a particular reason Marston included this in his comics.

Wonder Woman has always been a lightning rod. She contains a lot of seemingly contradictory elements in her DNA.

"Marston literally wanted to save the world with his ideas," Robinson says, when we speak in Los Angeles ahead of the film's release. "[He] did a bunch of research and came to the conclusion that men were inherently violent and anarchistic, and women were inherently loving and nurturing. He thought the path to peace on the planet is to let women be in charge and rule the world."

As Robinson explains, including images of bondage was a part of attempting to achieve said peace. "He thought that men are never going to give up their power voluntarily. If women learned how to use what he called their 'captivation emotion' — basically, their allure — to make it pleasurable for a man to submit to them, that’s the quickest way to get to peace," she says.

This is why, according to Robinson, Diana Prince is a gorgeous, bodacious woman in a sexy outfit shown controlling others with, among other things, her lasso. "He created Wonder Woman to literally be a piece of a psychological propaganda to encourage men and boys to enjoy and respect a powerful woman," she adds.

And while this is certainly a unique idea, it doesn't necessarily check out, and Robinson — who admits to admiring Wonder Woman for many reasons — agrees. But she isn't as concerned with painting a perfect picture of feminism when it comes to the beloved hero. Instead, she wanted to present all facets of this character and let them wrestle with each other on screen.

"Wonder Woman has always been a lightning rod. She contains a lot of seemingly contradictory elements in her DNA," Robinson, who spent eight years crafting the film, says. "I think that’s why she’s so exciting, and why she holds a place in the popular imagination. Writing this [movie], I was working it all out in my head. The characters argue every conceivable point that I’ve argued with myself, or that I’ve heard people argue, about Wonder Woman."

Like every feminist in the real world, Wonder Woman is not without her flaws. "There’s this real engagement with feminism, bondage, desire, sexuality and gender — all the stuff that Marston was deeply engaged with as a psychologist," the filmmaker says.

Over the course of her 76 year existence, Wonder Woman has grown and evolved into something different than what she started as. Thanks to different interpretations throughout the years — and most recently, Patty Jenkins' undeniably empowering iteration of the hero — what was once intended to be a piece of propaganda is now, more commonly, seen as a hero and role model for young girls and women alike. And that's a good thing. Diana Prince may have a storied and complex history, but so do most actual women.

More like this
At 28, Rosie Perez Risked Her Career To Stop Playing Stereotypes
By Gabrielle Bondi
Your Guide To Watching 'Everything Everywhere All At Once' In The UK
By El Hunt and Sophie McEvoy
Twitter Is Identifying With Sally Field & Jane Fonda’s Friendship In New Viral Video
By Jake Viswanath
At 28, Debra Jo Rupp Was Living A Much Different '70s Show
By Grace Wehniainen
Get Even More From Bustle — Sign Up For The Newsletter
From hair trends to relationship advice, our daily newsletter has everything you need to sound like a person who’s on TikTok, even if you aren’t.