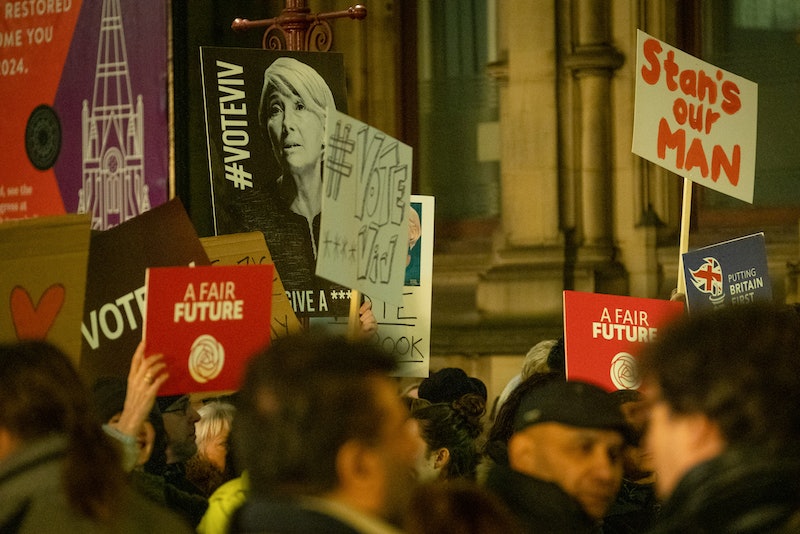 Not too many programmes have scared me enough to consider turning off the television to hide under my duvet in complete and utter despair. But dystopian dama Years & Years successfully terrified me long after I'd turned the TV off and gone to bed. There are no ghouls or monsters in the show, the fear factor here is just a fictional peak into Britain's future — and, needless to say, it's bleak one. Year And Years follows the fictional Lyons family as they imagine what Britain will be like over the next 15 years for their newest family member.

Dystopian fiction has always been one of my favourite genres. It's a perfectly chilling mechanism to forewarn us of societies' downfalls, by reimagining worlds under different trajectories and watching how they fall into catastrophic disasters. The genre gets really scary when aspects actually come to life in our real world. Many believe that what's happening right now with reproductive rights in Alabama is an eery echo of Margaret Atwood's 1985 book The Handmaid's Tale, for example.

Directed by Russell T Davies (best known for Queer As Folk and the revival of Doctor Who), Year And Years perfectly illustrates the fears people on both the left and right wing of the political spectrum have for the coming years. While the show highlights some progressive aspects of British society, like multiculturalism and a growing acceptance for people in the LGBTQ+ community, they're few and far between. Everything else is hopelessly bleak, and feels worryingly realistic. Even the liberal Lyon's family prove there's still a long way to go. Their "sweet grandma" uses a racist slur about her own mixed-race grandchild, proving that, even within this interracial, liberal family, racism is still alive and well.

Episode one is set five years from now, and in this reality it's totally normal to believe in flat earth theories, or that germs don't exist and were in fact designed by pharmaceutical companies.

One of the scariest parts for me was the introduction of Vivienne Rook (played by Emma Thompson), a nasty entrepreneur-turned-politician who's xenophobic views catapult her into being the nation's sweetheart. With reports that racism has been on the rise since Brexit, and as the grandchild of Caribbean immigrants, nothing scares me more than this future.

As much as other dystopian shows like Black Mirror have frightened me in the past, it never felt really real like Years And Years did. Children are gormlessly ruled by technology. Creepy Snapchat-style filters can be worn IRL, creating yet another barrier between parents and their children. And then, to top it all off, Trump launches a nuclear weapon at China, causing World War II-style sirens to ring out across Britain.

What makes Year And Years so brilliant and terrifying to me is that it all feels so imminent. Who's to say a nuclear weapon won't be launched? What's stopping the government from booting more immigrants and their families out of the UK? The show puts very real and very scary scenarios in front of us and makes us question, "is this really the future we want?"

Watch episode two of Years And Years tonight on BBC 1 at 9 p.m.