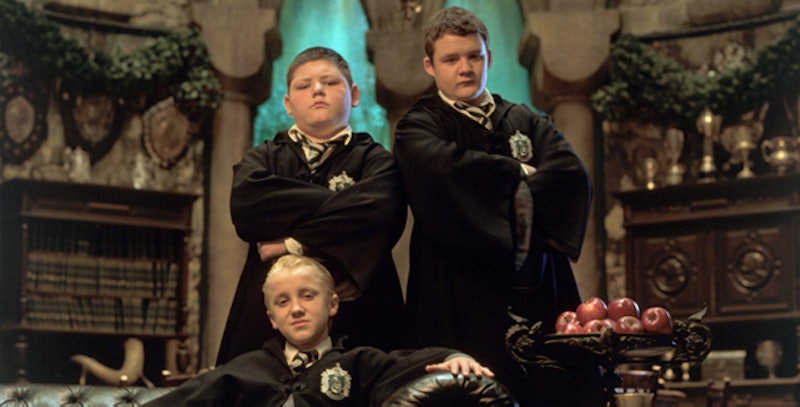 Famously dark and dingy, in the books the Slytherin common room is forbidden territory for Gryffindors Harry, Hermione, and Ron. A passage from Harry Potter & The Chamber Of Secrets describes it as, "a long, low underground room with rough stone walls and ceiling, from which round, greenish lamps were hanging on chains."

For set designer Stuart Craig, making the Slytherin common room the antithesis of the cosy, warm, and inviting Gryffindor one, was a conscious decision, according to the Warner Bros Studios site. Craig wanted it to look as though it was a dungeon that had been carved out of solid rock and ensured the signature green and silver of Slytherin saturated the whole room.

If the legendary hang-out spot isn't enough Slytherin worship for you, the Great Hall will have Slytherin Banners suspended from the ceiling. The tour will also incorporate the Malfoy family's costumes as well as those worn by Tom Riddle, tracking his evolution from troubled schoolboy into the Dark Lord.

The Studio Tour London's Celebration of Slytherin feature will run from Friday April 3 to Sunday Sept 6 and is likely to sell out, so if you want to be there you'd best book your tickets here faster than Malfoy's Nimbus 2001.

The common rooms in the Harry Potter books and films are notoriously difficult to breach, so is it the same deal for those wanting to visit the Slytherin common room? You'll be pleased to hear that the experience is covered in the usual ticket price so you won't need to hit up Gringotts ahead of your trip.

This article was originally published on Feb. 26, 2020