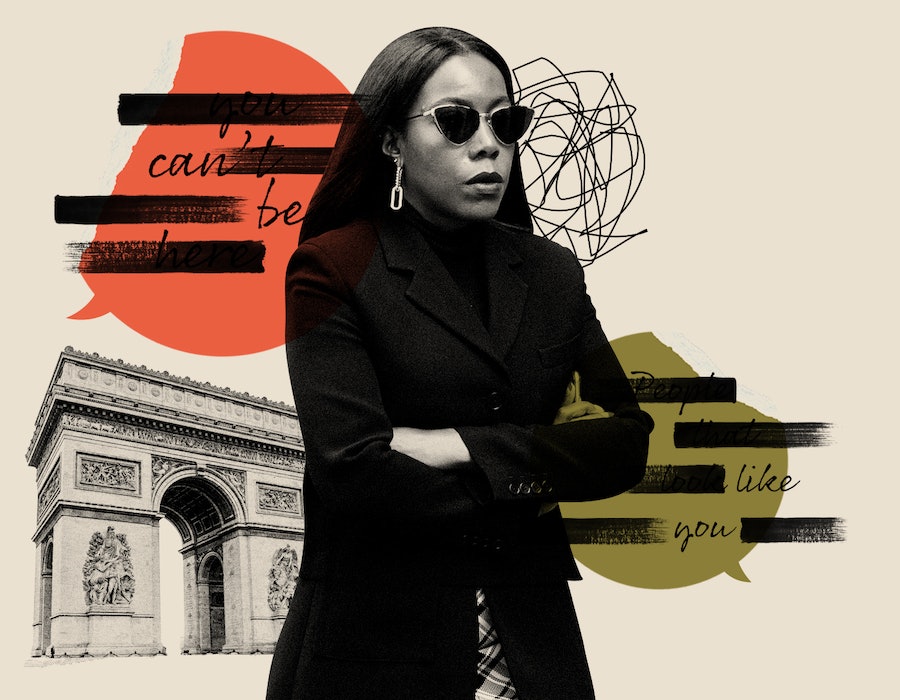 It was pouring rain. I was dressed in a full look — Phillip Lim blazer, Ellery skirt, Jimmy Choo shoes — because that’s what you do when it’s Fashion Week. I’ve been going to the shows for the last decade, and traveling internationally to London, Milan, and Paris for the last few years. During the most recent round of shows in March, I was spending a day in Paris reviewing the new collections. Before I went to my next appointment at Loewe, I told my driver we would need to make a stop to return some items I’d borrowed from a retailer. During Fashion Week, brands often dress editors for events and shows as part of their media strategy, and this brand set up their “gifting suite” in an anonymous building in the 9th arrondissement. There was no doorman and unless you had the address, you wouldn’t know it was there.

When I arrived, I emailed the publicists to let them know I was outside. I was getting drenched waiting for their response. I don’t speak French fluently, but in an attempt to speed things up, I waved hello to a woman entering the building and walked in behind her. I’d been there earlier in the week to select the clothes I wanted to borrow, so I knew the suite was on the fifth floor. I stepped on the elevator with the white woman. This is when I became a suspect. The woman backed into me, so I stepped back into the hallway. “We can’t get on,” she said. I was uncomfortable and trying to avoid an unwanted confrontation, so in response to her hostility, I suggested she take the elevator alone and I would take the stairs. She began yelling, “No! You can’t be here! You need to leave!” I informed her I was there for a fashion event. “There have been robberies in the building and people like you steal,” she replied.

I was offended so I asked for clarity. “What do you mean people like me commit robberies?” “People that look like you,” was her reply. “So you need to get out.” Her racism was unfathomable. I explained to her the concept of Fashion Week and the fact that I was a professional woman representing a major magazine outlet. I was in head-to-toe designer clothing and shoes, with a bag full of designer items that I was returning to a high-end brand, and I had a personal driver waiting right out front. Why would I ever need to steal from this woman? “It doesn’t matter how you dress or what you’re wearing,” she said. “People like you steal and you need to get out right now.” I emailed and called the brand team, asking them to urgently come and get me. No response.

The only thing that mattered to her was the threat of my black skin.

The white woman threatened to call the police, even though I was simply trying to do my job. I told her to go ahead, but even though I’d encouraged her to do so, I did not feel protected. Foreign cops, racism, and clear biases meant that if the cops did come there was a high likelihood they would not be on my side. The white woman began screaming like she was in grave danger. One of her neighbors, another white woman, heard her and ran downstairs to her rescue. All the while I stood there, trying to keep my patience, waiting for the brand’s publicists to come and get me. The two white women began speaking in French, pointing at me. One of them grabbed me by the arm and tried to pull me out of the building, screaming for me to “get out.”

I felt helpless. Deep inside I knew if I retaliated and protected myself, I might wind up in a foreign prison. The white neighbor put in a second call to the police. I questioned why they would call the police when they were the ones verbally and physically attacking me. “You forced your way into the building,” one of the women responded. “You’re trespassing and you refuse to leave!” That was a lie. I simply walked in to avoid getting drenched in the rain.

Just as I was ready to give in to their racism and leave, I heard footsteps on the stairs. It was two members of the brand’s PR team, who were also white. They did their best to protect me and validate my presence, but even so, the white women who lived in the building reiterated that I did not belong. The publicists listened to both sides of the story, which I found offensive, and by the end, one of them had tears rolling down her face, agreeing that “this is racist.” One of the publicists took me upstairs while other people from the brand came down to scold the women who lived in the building. Before we got to the suite, I stopped at the restroom and broke down crying. The brand sent people to try and console me, but I was ready to go, so I was escorted back to my car.

Fortunately, I had a Black driver, which is rare, especially at Fashion Week overseas. He offered to assist if this happened again during my trip. “This happens all the time in Paris,” he said, disheartened. “They are very racist here.” He knew my experience all too well — the eventuality of white people trying to make him feel lesser than and like he didn’t belong. This entire experience was traumatic, but still I had to wipe my tears, put on a fake smile, hold my head up high, and push through the rest of the shows in the image of an unfazed, strong, and confident Black woman.

“There have been robberies in the building and people like you steal.”

This is the story of so many Black women, especially in 2020. I want to make sure readers understand that the woman said I looked like a burglary suspect solely due to my skin color. It’s not lost on me that Ahmaud Arbery was killed because Gregory and Travis McMichael alleged that he “looked like” a person who committed a string of robberies in their Georgia neighborhood — robberies that were never confirmed. What is the description of someone who looks like a robbery suspect? Apparently to many white people, that description is simply being Black. That description is racist.

As a professional Black woman working in the fashion industry, I've worked hard — oftentimes harder than most — fighting to climb the ranks, reaching a point where I can hold my head up high and be proud of my accomplishments. This woman justified her physical and verbal attack solely based on the color of my skin, as that was all she could see. Not the hard work, dedication, and passion I've put into building myself up. None of that mattered. The only thing that mattered to her was the threat of my black skin.

Imagine if you were trying to do your job, and do it well, and you were faced with situations like this. This was a major incident, but just like all the Black fashion editors who have come before me, I have experienced microaggressions throughout my career. I could go on forever about pay equity and times that I have been passed over for promotions, even though I was the most qualified candidate. I can explain to you how it felt to receive a prominent role and have direct reports question my authority because I’m Black. I can detail the experience of being given a title change with no increase in pay, even though non-Black people with similar promotions were given salary increases. I can also very specifically remember what it was like to work at a major publication when one of its leaders consistently got me confused with the only other Black girl on the team every single time she saw me. I’ve been to many runway shows that included cultural appropriation. The fashion world has a lot of work to do, specifically with regard to representation, discrimination, and racism.

Being at fashion shows is one of the highlights of this profession for me. I believe so deeply in the idea of an artist's dream coming to fruition. When their creations are well-received, it makes me emotional. It reminds me to keep going. It drives me to hope for a better tomorrow, both in fashion and in our country. I love watching people live out their dreams, and I look forward to a world that allows me to live out mine — without experiences like this.