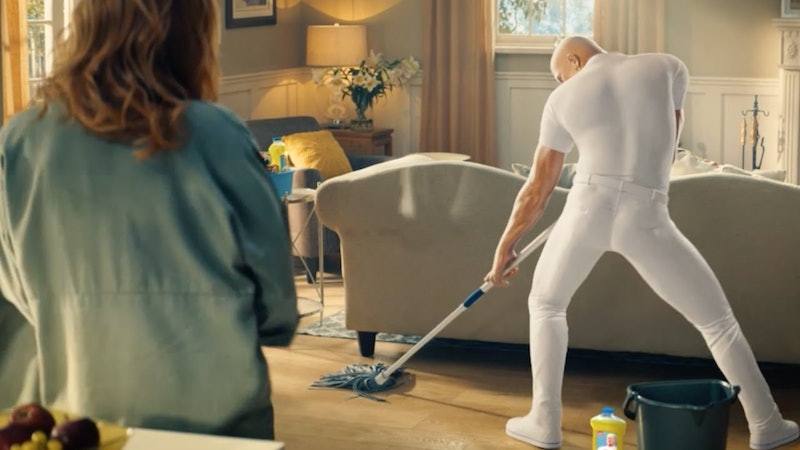 It's no secret that media advertisements are packed with gender stereotypes: soccer moms who are solely responsible for cleaning up the kids' messes; dads who do household repairs (because nobody else could, obviously); young women in revealing clothes being valued for nothing but their looks — cultural rules that behave as a self-fulfilling prophecy because we feel obligated to follow them. The tides might be turning, though, because a new ban could eliminate advertisements that reinforce gender stereotypes and potentially leave a negative lasting impression on viewers.

After a year-long inquiry, the Advertising Standards Authority (ASA) determined that these types of ads "can restrict the choices, aspirations and opportunities of children, young people and adults," and thus have come up with a more rigid set of standards applying to ads that might harmfully depict gender stereotypes. Now, don't expect to see a complete rejection of typical gender roles in advertisements. You might still spot ads where women are cleaning the house or men are fixing a leaky faucet because, well, that's the way life looks sometimes. Ads that try to box genders into certain rules, though — and surely ads that suggest certain activities are only appropriate for one gender — could go bye-bye.

"Portrayals which reinforce outdated and stereotypical views on gender roles in society can play their part in driving unfair outcomes for people," says Guy Parker, ASA chief executive, adding, "While advertising is only one of many factors that contribute to unequal gender outcomes, tougher advertising standards can play an important role in tackling inequalities and improving outcomes for individuals, the economy and society as a whole."

So, what kind of ads might face the chopping block? Let's start with that one fast food joint, which famously stated in a press release, "We believe in putting hot models in our commercials, because ugly ones don’t sell burgers." Women were reduced merely to sexual objects used to sell a burger. Also, these:

Note that food doesn't even make an appearance until the commercials are almost over.

Then there's this dumb blonde who just doesn't have a clue, and (as the ad states) is pretty to look at but doesn't have much going on upstairs, which renders her a totally pointless human being:

While sexist and stereotypical ads (starring both women and men, to be clear) have saturated the media for years, it hasn't been all bad. Let's not forget this commercial that so eloquently pointed out the difference in how we portray men and women in the media.

There is a way to show men and women in what might be their more traditional roles, but with a modern update: maybe a mom and dad are cooking dinner together, or fixing a leaky faucet together, or cheering on the kids at their soccer game together — as opposed to certain responsibilities being placed solely on one of their plates.

This is somewhat of a chicken-and-egg scenario, meaning we can't really say if stereotype-reinforcing ads cause more sexism in real life, or the other way around. One thing we can probably say with confidence, though: it's a never-ending cycling. One encourages the other, and vice versa; and as long as ads displaying gender stereotypes have such a strong grasp on the media, we'll continue to have these expectations in our day-to-day lives. Reducing their appearances can only help our situation. Here's to more equality in advertising!