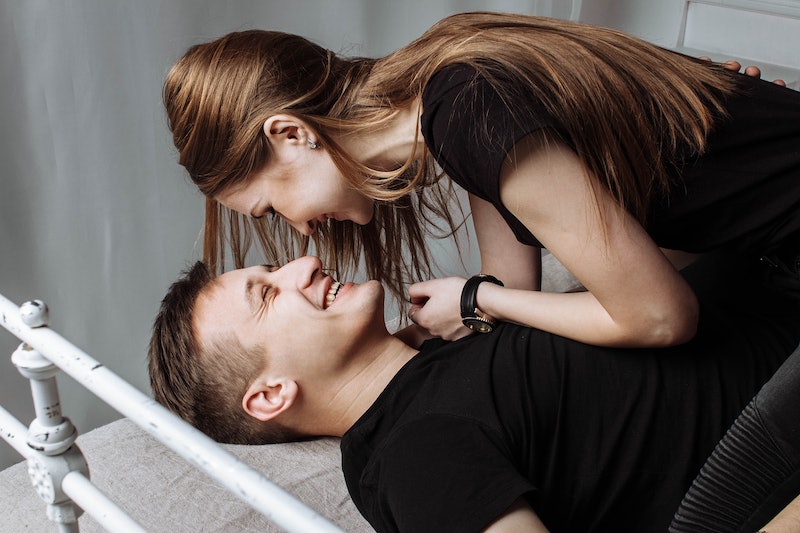 While there are lots of weird things that happen when you move in with someone, this one is bound to get under your skin. Apparently, you didn't just share ketchup and an appreciation for the late-night sitcom with your last roommate. According to a recent study from the University of Waterloo, Canada, you shared your microbiomes — the unique community of microorganisms chilling out on your skin right now — with each other. Over time, people who live together influence each other's microbiomes so strongly that researchers could accurately identify cohabiting couples just from skin samples. Talk about leaving your mark on someone.

In the study, which was published in the journal mSystems, microbial ecologists analyzed 340 skin samples from ten heterosexual couples currently living together. These samples were swabbed from 17 sites all over the body, including the navel, armpit, and nostrils. (Fortunately for the participants, they were allowed to collect their own samples.) Researchers compared the composition of each participant's skin samples with their partner's, looking to see if there were any similarities suggesting that they had influenced each other. According to the odd-yet-sweet results, that's exactly what happened. "Cohabitation was significantly associated with microbial community composition," researchers wrote.

The catch? Certain skin regions had much more similar microbiomes than others. For instance, microbe communities collected from the thighs were more similar between people of the same gender than people who lived together. On the other hand, couples tended to have very similar microbiomes on the bottoms of their feet, probably because they're walking on the same floors all the time.

"This process likely serves as a form of microbial exchange with your partner, and also with your home itself," said study author Josh Neufeld, according to Science Daily. Sexy stuff, right?

Microbiomes are incredibly unique, like a bacterial fingerprint, but they're surprisingly malleable. Research has shown that the microoganisms hanging out in your body are influenced by your diet, environment, and even simple chance. It's no wonder sharing a bed with another person, who also happens to be teeming with bacteria, affects the composition of your own microbiome.

It is, however, kind of weird to contemplate. Good luck trying not to think about all those microbial hangers-on when your roommate, platonic or romantic, gets home tonight.

More like this
20 Women Reveal Exactly How Long It Took Them To Get Over Their Ex
By Amanda Chatel and Lexi Inks
10 Ways To Be More Empathetic To Your Partner
By Raven Ishak and Lexi Inks
Think Your Partner Is Cheating? These Tarot Cards May Confirm Your Suspicions
By Kristine Fellizar
The 19 Best Tweets & Memes About Bisexual Awareness Week
By Lexi Inks
Get Even More From Bustle — Sign Up For The Newsletter