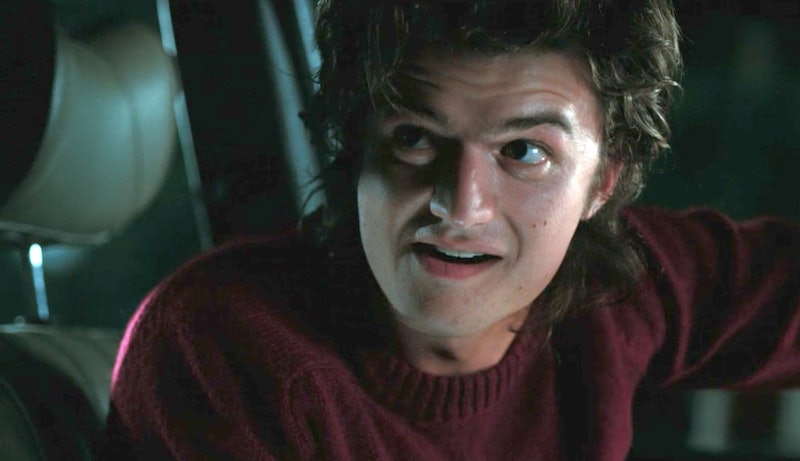 Season 2 spoilers ahead. Of all the many aspects of Stranger Things Season 2 that are totally worth discussing, there are none more important to me than the fact that we all love Steve Harrington. It's a feat that didn't seem possible for many people in Season 1, as Nancy's return to Steve at the end of the season when Jonathan Byers was right there led many a people to weep over her life choices. But by the end of Season 2, Steve Harrington had proven himself not only a good guy, but a total mom, an amazing older brother, and a passable babysitter. Now everyone on the internet appears to be in love with Stranger Things-Season 2-Steve Harrington — and I am here to tell you all today that, if Season 2 was the first time you realized he is the actual greatest, then you were seriously missing out.

But Season 2 is not the only reason to love Steve Harrington, though I admit it's incredibly compelling. No, Steve Harrington has been serving up quality character development since Season 1, and Season 2 is just the culmination of all of those hard-won life lessons that should have made him your favorite teen boy in the first place. On top of that, he's played by Joe Keery, who is, by all reports, an actual cinnamon roll — so, seriously, the memes and the love are nice, but you're late to the Steve Harrington Appreciation Party.

When we were first introduced to Steve Harrington, he was hardly what you might call a peach. He smashed Jonathan Byers' camera. He assumed Nancy was cheating on him with Jonathan and watched his friends spray paint slut-shaming messages about her at the movie theater. He was more concerned about his father's opinion than he was about Barb's death, for Farah Fawcett's sake. What a tool. But in addition to illustrating perfectly all the many things wrong with Steve Harrington as a human, Season 1 also showed us a Steve who owned up to and attempted to overcome those flaws.

He dropped those friends like a bad habit, telling them, "Neither of you ever cared about her... because she's not miserable like you two. She actually cares about other people." Then, he went to clean those messages off the movie theater. He admitted the whole Barb thing came out because of panic, and that it made him a "total d*ck." He went to the Byers home to make amends with Jonathan and Nancy, helping to defeat the Demogorgan and even buying the new camera that Nancy gave Jonathan for Christmas.

And why were we angry with him about the camera thing in the first place? Need I remind you that Steve broke Jonathan's camera because he was using it, in part, to take pictures of Nancy through a window while she took off her clothes?

Yeah. The massive difference between Steve at the beginning of Season 1 and Steve by the end of Season 1 was incredible, and Season 2 only continued that development in a way that felt natural. Yes, he took some steps back. He abandoned a drunken Nancy at that college party and took her to task for things she couldn't even remember saying the next day. That was not at all cool.

But he also recognized that Nancy genuinely wasn't into him anymore and let her go, even though that hurt him. He bore no ill will against her or Jonathan, just like the Steve Harrington of the end of Season 1. And he stepped up to become the babysitter with the best hair, caring about the Party not because of his relationship with Nancy but because of his relationship with them.

And throughout, he's been portrayed by Joe Keery, an actor as swoonworthy as Steve Harrington. He's in an actual band called Post Animal. He heard our cries that he could be the son of Jean-Ralphio from Parks and Recreation and actually did a commercial with him. His Instagram handle is, of all things, @uncle_jezzy. And he uses his Twitter to both raise awareness for good causes and make amazing posts like this:

Basically, all the reasons to love Steve Harrington have always been there. You just didn't see them until after Season 2 had aired. And that's fine. That's a valid life choice. A wrong one, but a valid choice all the same. But now that you've finally joined the party, make sure you love Steve twice as much to make up for lost time — and maybe, just maybe, we'll even let you be our zoomer.

Editor's Note: This article has been updated to add an alert for Season 2 spoilers throughout.