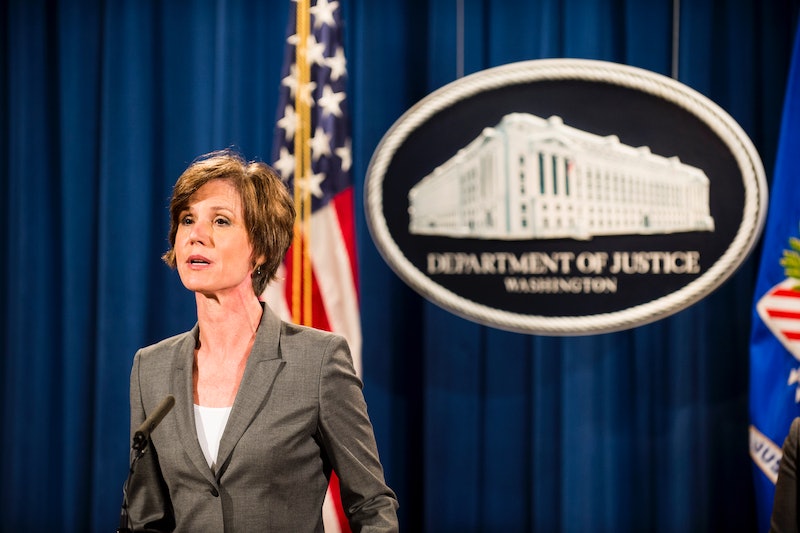 On Monday evening, just when you thought it was safe to go to bed, Donald Trump fired acting attorney general Sally Yates for — brace yourself — "betraying" the White House. Yates had committed the grievous sin of pointing out that Trump's refugee ban did not align with her understanding of "stand[ing] for what's right." The whole thing is horrifying and unjust — and a Yates-themed "You're Fired!" meme from The Apprentice waiting to happen.

You can't make this up, can you? Real estate tycoon carves out a career on reality television, rising to notoriety for the catchphrase "You're fired!" as he eliminates yet another contestant. Reality television star uses economic uncertainty and fear to his advantage and becomes president-elect. Ten days after being sworn in, said president has already provoked chaos around the globe, and kicks off his second week by firing somebody who dared to oppose his (wholly unjust, unhelpful, and unproductive) ban on the people who need immigration most — refugees, and in particular refugees from war-torn Syria.

It's like watching car crash. It's a severe undermining of democracy. It could be grounds for a constitutional crisis. As Twitter struggled to grapple with the America in which we now like, it was also a "You're Fired!" meme.

There Were Bad Jokes...

And There Were Jokes That Were... All Right

And This Was Just Depressing

Others Were A Little More Hopeful

Even as Twitter loses its mind over this, remember: This lends itself well to a nifty catchphrase, but this is not a joke. Firing a person who doesn't agree with your prejudice is what dictators do.