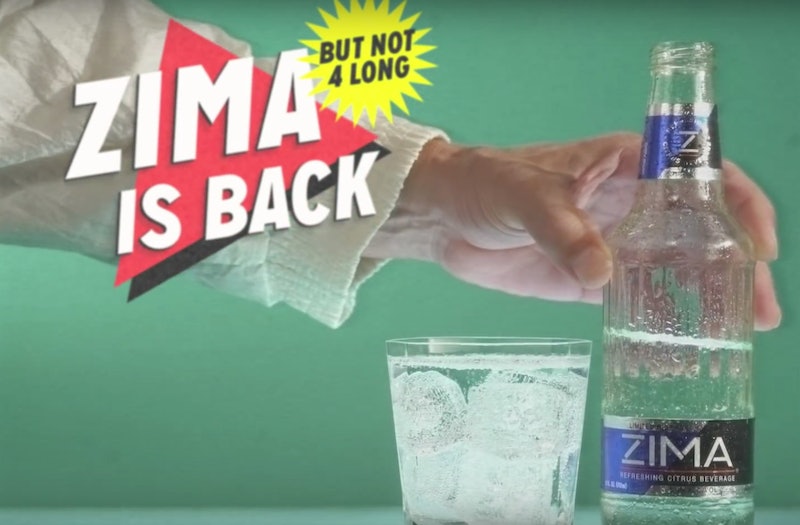 If you're a millennial who grew up at some point during the '90s, you likely had an extremely strong reaction to reading the above headline about the alcoholic beverage Zima returning for a limited time only. Either you knew about the drink and were too young to have actually ever tried it before it was retired from shelves in 2008, or you drank the beverage regularly from the time it was released in 1993 until 2008. Former or latter, the bottom line remains: Zima is basically every '90s kids' national past time, and since being discontinued, has only lived on in sitcom reruns from back in the day and, you know, our memories. (Also, apparently, Japan: According to the official Zima website F.A.Q., Zima is still sold in Japan. In other news, I'm currently researching flights to Japan.)

Not anymore. Thanks to distributor MillerCoors' genius, Zima is back just in time for 2017's Fourth of July weekend festivities, and will stick around until the end of summer (aka, Labor Day, in September). I don't know about you, but I'm literally going to be picking up 20 six-packs stat.

"Tons of people have been asking for Zima to make a comeback, and this summer seemed like the perfect time," MillerCoors' senior marketing manager of innovation Tristan Meline stated in a press release about Zima's triumphant return. "Whether you remember it or not, this summer is your only chance to taste the ‘it’ drink of the ‘90s."

If you've never tried Zima, here's what to expect: it's a citrus malt beverage that is basically the most '90s thing you will ever try in your entire life. If you've tried Zima... well, you're probably not even reading this article anymore, because you're going to pick up a six-pack of the drink.

You can check out where Zima is available on the drink's official website, so long as you're over the legal drinking age. Happy summer, everyone!