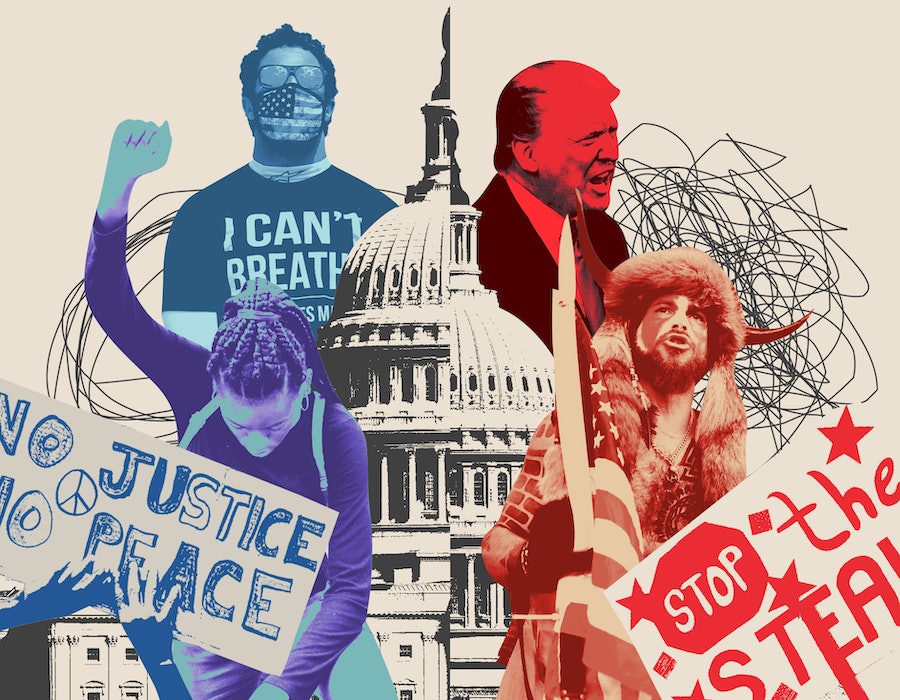 For the past few years, we’ve faced a rash of false equivalences in politics.

Hillary Clinton’s use of a private email server was equated with Trump’s myriad offenses including, but not limited to, soliciting foreign interference in a U.S. election. For years, Republicans have argued that if we say Black Lives Matter it means we don’t think Blue Lives Matter. And, most relevant to the moment, single cases of voting irregularities ballooned into charges of widespread voter fraud that could alter the results of an election. But what do you do when you’re on the wrong side of a false equivalence — and insurrectionists are on the other side?

That’s what liberals woke up to after a mob breached the Capitol encouraged by the President of the United States and two senators, Ted Cruz (R-TX) and Josh Hawley (R-MO), the disingenuous architects of the seditious objection to the Electoral College certification. Suddenly, a solemn and frightening day in American history was being compared to random acts of rioting and looting over the summer in the wake of the killing of George Floyd. Some conservative lawmakers and pundits even falsely blame antifa for the Capitol coup as a means to exonerate Trump’s complicity.

To be clear: Any rioting and looting is unacceptable, and Democratic political leaders have spoken out against such illegal actions. Last summer, as cities across the country dealt with looters posing as protestors, Atlanta Mayor Keisha Lance Bottoms and then-presidential candidate Joe Biden spoke out several times, with Lance Bottoms exclaiming, “Go home!”

But there is no comparison to what happened on Wednesday. First and foremost, the insurrection was sanctioned and supported by the most powerful man in the world. Months of lies about the election results — on top of years of lies about the press, Democrats, and even mainstream Republicans — finally boiled over, and President Trump relished every moment. According to reports, he resisted calling in the National Guard; Vice President Mike Pence ultimately made the call. And in the video President Trump released — hours after the breach of the Capitol began, supposedly meant to quell the raucous mob — Trump repeated his election falsehoods, claiming he won in a landslide before saying his supporters should go home and, crucially, that he loves them.

Needless to say, it didn’t do anything to stop the riot.

They weren’t trying to improve the country or make it safer for a wide swath of Americans. They wanted to subvert democracy, plain and simple.

There was also a stark difference in the police response compared to previous events. Officers waited until the evening to use tear gas and even took selfies with Trump insurrectionists as opposed to the treatment peaceful protestors got in Lafayette Square in June so President Trump could enjoy a photo op posing with the Bible. In New York City over the summer, protestors couldn’t even be in front of the Barclays Center without police using force, let alone breach the building. In Portland, officers used pepper balls. But Jake Angeli, a QAnon adherent who breached the Senate chamber, said law enforcement stopped trying to keep them out and eventually just “let them in.”

At the time of writing, only 82 arrests have been made — a slow night at the height of the BLM protests in big cities.

The underlying impetus for the events also matters. The BLM protests were dedicated to pushing for real police reform. There were specific proposals, including banning chokeholds and no-knock warrants, that are central to the advocacy. In juxtaposition, the Trump-steered insurrection had no substantive goal. They weren’t trying to improve the country or make it safer for a wide swath of Americans. They wanted to subvert democracy, plain and simple. Republican enablers in Congress are now forever tied to this heinous act of sedition. President-elect Biden raised some of these same issues in his press conference on Thursday, highlighting the sad truth about the two tiers of justice and police response in America, one for whites and one for people of color.

So it’s critical to reject the comparison between Wednesday’s events and anything we’ve witnessed before. Such false equivalencies and whataboutisms are not only inaccurate, but extreme and dangerous.

Unfortunately, they’re ruthlessly effective. Suggesting there’s a "liberal amnesia" or "selective outrage" only attempts to remove accountability for the president’s behavior and actions. And when the highest levels of government incite anti-American actions and aren’t held to account, it creates long-term damage and opens the door for something even worse to happen.

More like this
The UK Government Is *Finally* Banning Conversion Therapy
By Sophie McEvoy
Here’s Where The NHS Nurses’ Strike Currently Stands
By Sophie McEvoy
8 Charities To Donate To During Black History Month
By Alexis Morillo
Man Meets Politics: ‘Boy Meets World’ Star Ben Savage Is Running For Congress
By Jake Viswanath
Get Even More From Bustle — Sign Up For The Newsletter
From hair trends to relationship advice, our daily newsletter has everything you need to sound like a person who’s on TikTok, even if you aren’t.