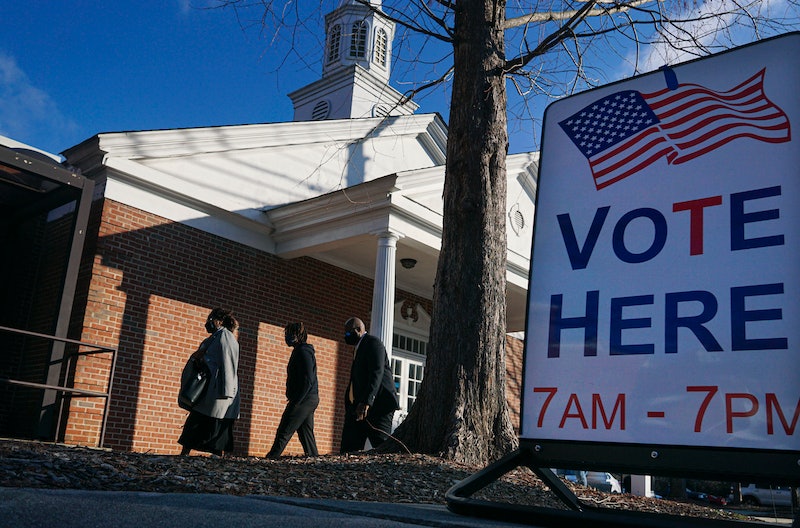 All eyes are, once again, on Georgia. A pair of tight runoff elections for the U.S. Senate will determine whether Democrats or Republicans claim the majority of the chamber, and whether President-elect Joe Biden can enact an ambitious legislative agenda once taking office. If incumbent Republican Sens. David Perdue and Kelly Loeffler can squeak out victories, Majority Leader Mitch McConnell will maintain his obstructive throne. If their challengers, Jon Ossoff and Reverend Raphael Warnock, succeed, Democrats will claim the presidency and both congressional chambers for the first time since Barack Obama's first term.

And, it seems, the results could all come down to voter turnout.

According to a Politico report, Republican strategists are eyeing the figures 700,000 and 900,000. If turnout on Election Day, Jan. 5, hovers around 700,000, chances look bright for Ossoff and Warnock. If turnout is closer to 900,000, that would favor the Republican senators, as day-of voters are disproportionately Republican. (President Trump, for his part, spent months sowing doubt about mail-in voting.) As of Tuesday afternoon, news outlets are reporting lower turnout and short lines.

Traditionally, Democratic candidates fare poorly in Georgia runoffs, a system that was adopted with the intention to suppress Black votes. But already, more than 3 million people voted early, either in person or by mail, a staggering record that bests 2008's 2.1 million early votes. (For context, nearly 5 million Georgians voted in the November elections.) According to The New York Times, 31% of those early voters were Black, an increase of roughly 3% from November, and white voters without college degrees were underperforming — a set of promising stats for Democrats. (Georgia’s increasing racial and ethnic diversity is credited with flipping the state from solidly Republican to a tossup, alongside massive voter registration campaigns. In 2020, 53% of the state's registered voters identified as white, compared to 63% in 2008.)

Republican strategists are worried on multiple fronts: After President Trump cast doubt on the integrity of U.S. elections, a conservative faction is intending to boycott voting altogether. And on Saturday, Jan. 2, just three days before the consequential runoffs, Trump pressured the Georgia secretary of state, Brad Raffensperger, to “find 11,780 votes” in his favor.

Will that affect Republican voters, or motivate their Democratic counterparts? We’ll start seeing the outcome of this months-long slog around 7 p.m. ET, when polls begin to close in the Peach State.