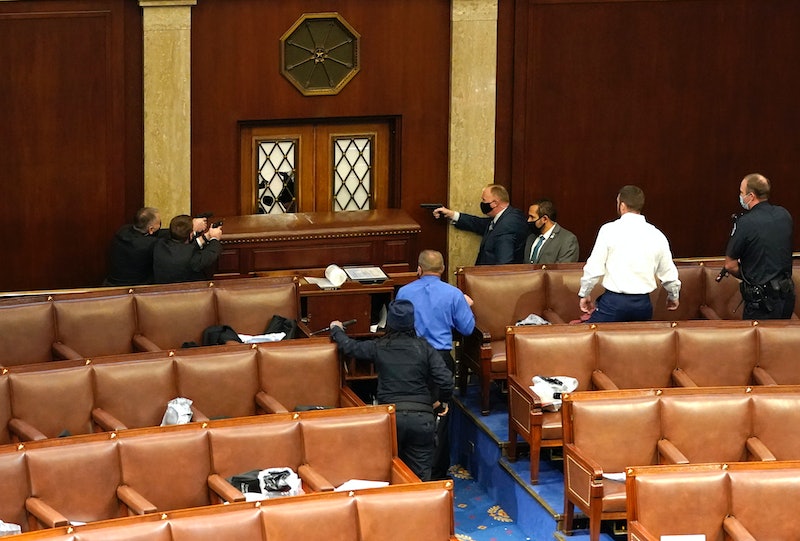 On Wednesday afternoon, as lawmakers congregated in the U.S. Capitol to certify the electoral count from the 2020 election, a mob of Trump supporters descended on the building in an attempted coup. The procedural Electoral College count, which would have certified Joe Biden's win in November, has since been paused. The building was placed under lockdown, and lawmakers were escorted by police to undisclosed locations for their safety.

The crowd of domestic terrorists breached the building's defenses and entered both the National Statuary Hall and the House chamber. There have been reports of shots fired, broken windows, and gas and teargas deployed. In response, the mayor of Washington, DC, Muriel Bowser, has ordered a 6 p.m. ET curfew in the city and requested backup from the National Guard.

President Trump, from the White House, did not called to disband the riot until 4:17 p.m. ET. Rather he tweeted, “Please support our Capitol Police and Law Enforcement. They are truly on the side of our Country. Stay peaceful!”

President-elect Joe Biden then addressed the protestors and Trump. "At their best, the words of a president can inspire. At their worst, they can incite," he said. "I call on President Trump to go on national television now to fulfill his oath and defend the Constitution and demand an end to this siege."

At 4:17 p.m., Trump posted a video on Twitter. "I know your hurt. I know your pain. We had an election that was stolen from us," he said to his supporters, without evidence. "But you have to go home now."