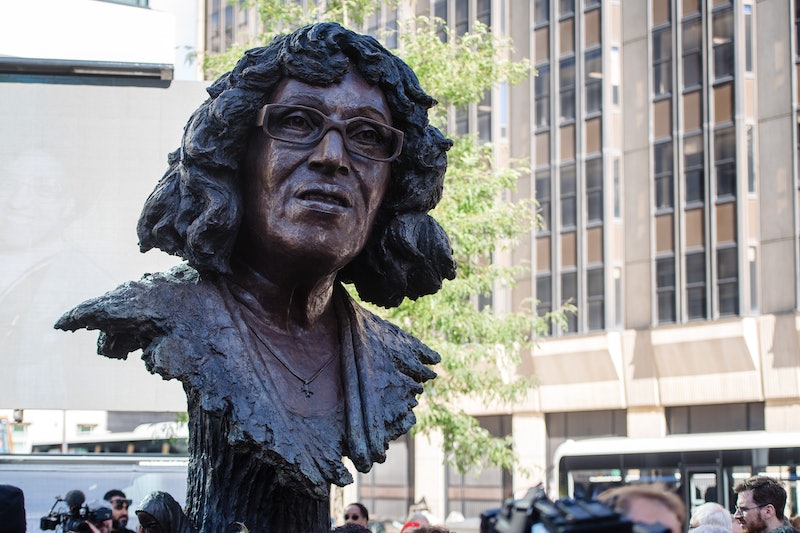 Each October, Black History Month UK encourages people and organisations across the country to learn, acknowledge and celebrate Black culture as well as spotlighting the valuable contributions made by Black people throughout history. This year, in the aftermath of the Black Lives Matter protests in 2020, the month-long event feels even more vital.

With this in mind, for 2021, Black History Month UK has launched a new campaign entitled “Proud To Be,” which invites Black and Brown people, including well-known faces, to share the pride they have in their heritage and culture “in their own way” and “in their own words.” With a chock-full calendar of events ahead, the celebratory campaign kicked off in the run-up to October, and so far, Black poets, LGBTQ+ icons, artists, students, politicians, and more have already taken part. Here’s how you can get involved.

What Is The “Proud To Be” Campaign About?

Now in its 34th year, Black History Month UK announced that this year’s theme would be “Proud To Be” with the intention of showcasing “the vast richness of diversity that Black and Brown people bring to the UK.”

Alongside its annual events, which see everything from live music shows, historical tours and readings across the country, Black History Month UK has been sharing personal stories from Black people of all walks of life, including MP Dawn Butler, the third Black woman to ever be elected as an MP.

As of October 1, unique and wide-ranging Proud To Be stories from Black people are already flooding in on social media via the hashtag #ProudToBe, including a powerful poem by a Black Scottish woman who shares her journey to loving her identity.

Plenty of schools, charities, and businesses are already involved with Black History Month UK events, with many organisations pledging to share “Proud To Be” stories of Black people within their workplaces and communities. Recently, a statue of Betty Campbell MBE, the first Black head teacher in Welsh history, was unveiled in Cardiff, Pride In London shared the work of activist and LGBTQ+ icon Audre Lorde, meanwhile University Chancellor and beloved comic, Sir Lenny Henry addressed students at Birmingham University, reflecting on the past year and a half.

How To Get Involved With The “Proud To Be” Events

There’s also plenty of informative events throughout October to sink your teeth into; earlier this week a statue of Wales’s first black headteacher, Betty Campbell, was unveiled in Cardiff on Wednesday, and on October 20, Imperial War Museum in London opens a new exhibition featuring the “inspiring stories” of black men and women during second world war. You can find some of the Black History Month UK event listings here, but it’s worth checking out local listings in your area.

As expected, education is an important part of this year’s theme, and the campaign is also focusing on “encouraging children and young people to share what they are “Proud To Be” with a new resource pack for schools to help integrate Black history across the whole curriculum all year round.

Why Does It Matter

It’s safe to say that conversations concerning racism and inequality reached a fever pitch over the last year and a half, and, as a result, many Black people felt bombarded by horrifying images in media. With this in mind, Black History Month UK says it wants to focus on “celebrating being Black or Brown” in response to all the challenging media coverage.

“It’s been a challenging time for many Black and Brown people, with so much in the media about racism, inequality and injustice. We wanted the theme of Black History Month 2021 to focus on celebrating being Black or Brown, and to inspire and share the pride people have in their heritage and culture – in their own way, in their own words,” said Catherine Ross, Editor at Black History Month magazine.

Ross added: “By asking people to share what they are Proud To Be we can share both individual stories and the vast richness of diversity that Black and Brown people bring to the UK.

“Black Lives Matter means people being able to live life to the fullest without having to compromise who they are. Everyone deserves the right to be Proud To Be everything they are and want to be in life.”