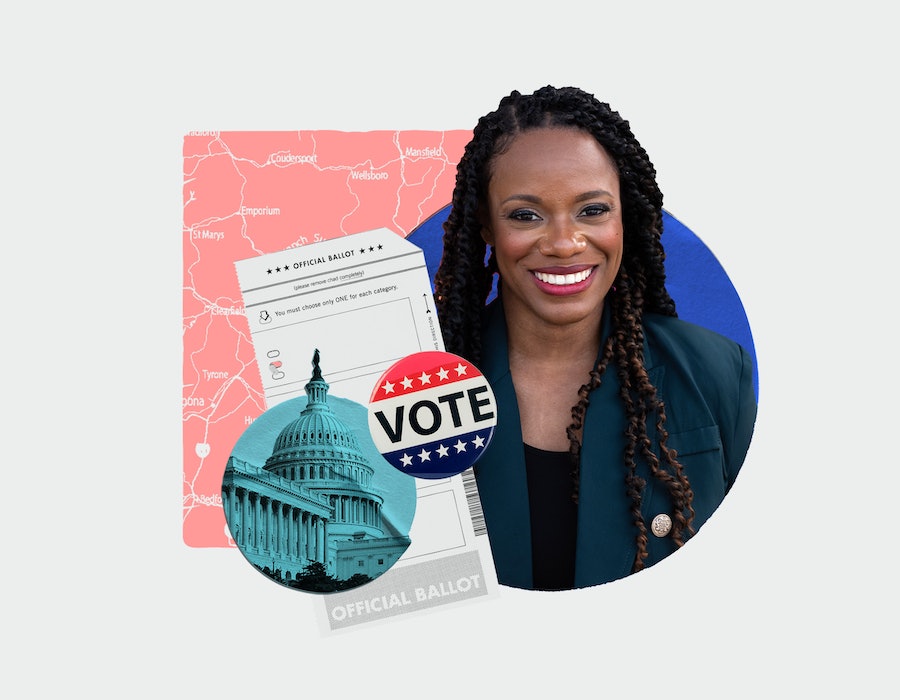 As the first Black woman elected to Congress from Pennsylvania, Summer Lee is well acquainted with challenging the status quo. Last month, she was chosen to represent the swing state’s 12th District in the U.S. House, winning 55.7% of the vote against Republican candidate Mike Doyle. (As a telling example of the old-boy homogeneity in western Pennsylvania politics, Lee will replace a retiring Democrat also named Mike Doyle.)

“Sometimes, change is uncomfortable,” she tells Bustle. “Often in American political discourse, we value the least confrontational routes, but the reality is that avoiding tension isn’t how we grow.”

Earlier this month, she wrapped up orientation with a subtweet at some of her new deep-pocketed colleagues: “We’re in the financial disclosure part of orientation, but I don’t trade any stocks or have offshore accounts, so I can probably head out,” she tweeted.

She might’ve had another reason for ducking out, too: Lee isn’t a big fan of chitchat. “I think I get more introverted as I age,” says the representative-elect, who’s 35. “I’m definitely not good with small talk. I get a lot of social anxiety. Being in a conversation with a group of people I don’t know, it just gives me the heebie-jeebies. But if it’s a small group of people I know, I’m very outgoing.”

“In 2017, someone asked if I would consider running for state rep. I texted a couple friends, and they were both like, ‘Uh, yeah, duh!’”

Lee grew up in Braddock, the steel town where Senator-elect John Fetterman was once mayor. She worked as a community organizer in Pittsburgh before being elected to the Pennsylvania House in 2018. Today, she’s viewed as a rising star in progressive politics — all six of “The Squad” members endorsed her congressional race — due to her support for reproductive and LGBTQ+ rights, gun control, Medicare for All, expanding the Supreme Court, and environmental and economic justice, which includes the Green New Deal.

In January, her first priority will be “getting dark money out of politics,” says Lee, whose own campaign was demonized by ads fueled with a huge influx of cash from corporate donors. “I saw how detrimental it is. If there were other Black women who were thinking ‘Oh, I might get into politics because of her,’ by the end, they were saying, ‘I would never do this.’”

She’s hoping to change their minds. Below, Lee answers questions about other “firsts.”

Actually, my staff. It was an unusual day — I resigned from the state House.

The group text [with] my mom, my grandma, and my sister.

That’s a hard question because I don’t really. Images and narratives about Black women are so few and far between, and so limited.

I was 15 or 16, working for my mom at her job. It was a nonprofit that helped folks find work. I was basically a gofer.

The Bahamas. I went there at [age] 7 on vacation.

Some inconsequential race in college that I don’t remember.

It was the 2008 primary for Barack Obama, and I missed it because I was studying abroad in Aix-en-Provence, in southern France.

The same year, 2008. I got back in time for the general election, and I registered people to vote on campus.

In 2017, someone asked if I would consider running for state rep. I texted a couple friends, and they were both like, “Uh, yeah, duh!”

When I decided to get in it.

More like this
At 28, Rosie Perez Risked Her Career To Stop Playing Stereotypes
By Gabrielle Bondi
Savannah Guthrie Got Her First-Ever Tattoo With This Former Wild Child
By Suzanne Zuckerman
Hailee Kaleem Wright's Topsy-Turvy Path From MTV To Broadway
By Samantha Leach
Jessica Simpson On The Time She Was Pursued By A Backstreet Boy & An *NSYNC Member
By The Editors
Get Even More From Bustle — Sign Up For The Newsletter
From hair trends to relationship advice, our daily newsletter has everything you need to sound like a person who’s on TikTok, even if you aren’t.