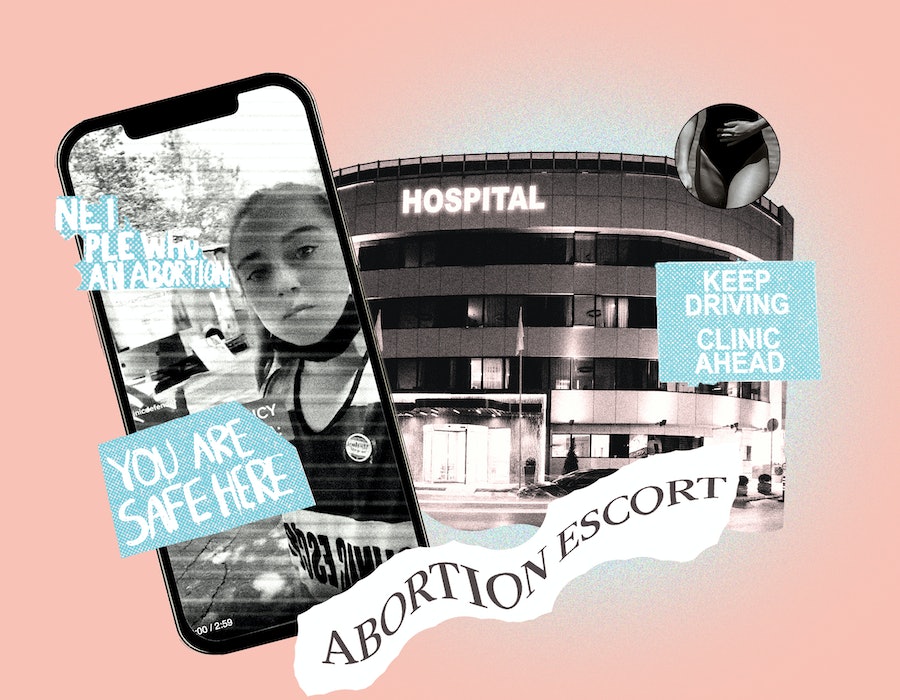 In September 2021, a TikTok video started making the rounds online. In it, a white man attempts to stop cars from entering an abortion clinic in Charlotte, North Carolina. He wears a baseball hat and headset as he patrols the area with a fellow protestor. The video’s narrator, Kennedy,* a seasoned volunteer at the clinic in her late 20s, approaches him. “What’s your name?” she asks. “Greg,” he answers into the camera. He won’t share his last name. “Why not?” she asks. “You don’t want people to know you’re here trying to control other people’s bodies? You don’t want the world to know that?”

Kennedy trails Greg along a sidewalk and peppers him with questions about his vaccination status and why he’s not wearing a mask. “So you can’t love life that much,” she says. “That’s kind of funny, isn’t it?” The post has accumulated nearly 80,000 likes and more than 7,000 comments.

Since launching her TikTok account in 2020, called The Clinic Defender, Kennedy has amassed more than 336,000 followers. There are scores of people like Greg in her videos, several of whom are far more loquacious. Volunteers at the Charlotte clinic have been called names for years — “witch,” “slut,” “ugly, angry white woman,” and the like — but in the run-up to the Supreme Court’s overturning of Roe v. Wade on June 24, the insults and threats felt more menacing.

Currently, abortion is still legal in North Carolina, and the clinic will likely see patients from neighboring states soon, such as Tennessee, Georgia, and South Carolina, all of which have enforced or are likely to enforce restrictions on the procedure.

Since 2019, the National Abortion Federation (NAF) has reported an escalation in aggressive anti-abortion activity, and the Department of Homeland Security is bracing itself for increased political violence following the Supreme Court ruling. Kennedy and her fellow clinic defenders remain steadfast.

“We’ve seen people come out there with knives strapped to them, with guns in their cars. They seem a lot more emboldened,” Tina Marshall, 67, who escorts patients from their cars to the building, tells Bustle. “When I first started out, I told myself I wasn’t going to engage with them, but it’s impossible not to. They know my name. I know their names.” Marshall, who founded the Black Abortion Defense League, had an abortion in the 1980s. “I’m just absolutely appalled at what pregnant people have to go through to get health care,” she says. “Nobody should have to walk through a parking lot and be called names, be told you’re going to hell, and have Bible verses spit at you.”

TikTok has quickly become a platform for defenders and advocates to share their daily experiences with thousands of viewers, everything from screaming matches to an alleged physical assault.

Reverend Tara Gibbs, who started volunteering at the Charlotte clinic a year and half ago, credits social media for getting her involved. “TikTok in particular is what brought [clinic defending and anti-abortion activism] to my attention,” says Gibbs, a Christian minister and educator. “Like, wait, this is in my city. This is down the street. I know where this is, you know? And that’s what got me inspired to do this work.” She’s since started her own TikTok account.

As The Clinic Defender and its spinoff accounts grow in notoriety, Kennedy, Gibbs, and Marshall do too. The visibility, which is helpful in recruiting new volunteers, undoubtedly poses risks for the women. One anti-abortion protestor even showed up at Gibbs’ church.

“I do have to protect myself, my partner, and my family, but I’m also intentionally in the forefront, because there are so many people who can’t [be],” says Gibbs, who’s 33. “I have to use the privileges that I have — a steady income, a safe place to live, a job that supports me — and if that means I’m the one who gets cursed out by these Christians and told I’m a false prophet and blah, blah, blah…” She trails off. “I’ll take it if it means that patients, companions, and my fellow volunteers are safe.”

Kennedy regularly receives threats online. “When I first started [the account], I got to a point where I was like, ‘Do I want to continue my TikTok?’” she says. “Because I have to start thinking about how this impacts my life as a whole.”

Eliminating access to abortion care isn’t just a threat to the autonomy of birthing bodies, but also to the healing that providers and their communities offer on a daily basis. The success of this single Charlotte clinic depends on the intergenerational and interracial organizing that happens there.

That’s the underlying motivation for another volunteer, Shannon.* “For me, it’s the stories, the tears of happiness, sorrow, the variety of emotions in that parking lot,” Shannon, who’s the executive director of a local reproductive justice group, tells Bustle. “For every time I say ‘F*ck it’ and want to give up, [when I get home], I know I’ve impacted somebody’s life. And we have done it, not just me. We have done it as a community.”

Shannon doesn’t personally use TikTok, but she is a fan of the escorts’ accounts. Kennedy credits Shannon’s daughter as the inspiration behind hers. At the beginning of the pandemic, she returned home from college to take classes remotely, and started volunteering at the clinic. “One day she goes, ‘Can I take this video of one particular protester and do a TikTok?’” Shannon recounts, “and I went, ‘What the hell is a TikTok?’”

*Last names have been omitted to protect the subjects’ privacy.

Correction: A previous version of this story mischaracterized Shannon’s job. It has been updated to accurately reflect her position.