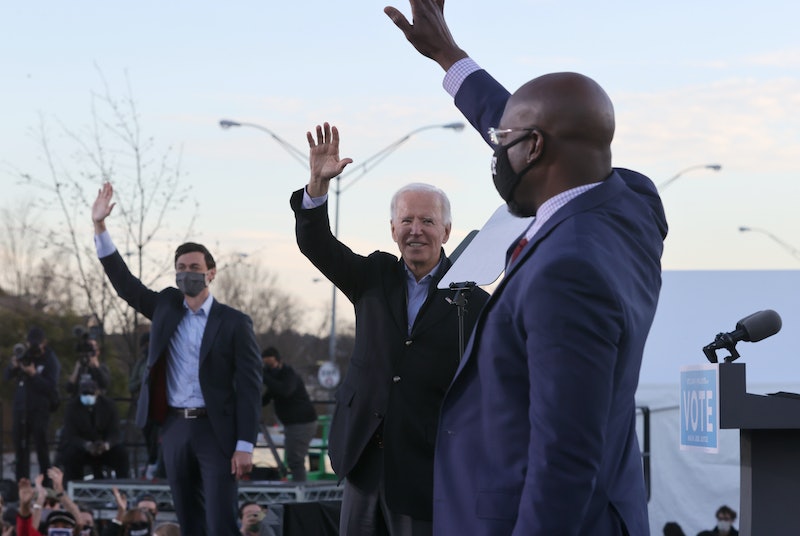 On Jan. 6, Rev. Raphael Warnock and Jon Ossoff won their runoff races in Georgia for the U.S. Senate, according to an NBC News projection on Wednesday afternoon. The Democratic pair defeated the Republican incumbents, David Perdue and Kelly Loeffler, in wins that will give the Democratic Party control of the U.S. Senate.

The upper chamber will be evenly split, 50-50, between Democratic and Republican senators. When Vice President-elect Kamala Harris is sworn into office on Jan. 20, she will cast any tie-breaking votes. With this win, Democrats will have control of a sought-after political trifecta — the White House, House of Representatives, and Senate — for the first time since President Barack Obama's first term.

On Wednesday morning, Sen. Chuck Schumer anointed himself the new Senate majority leader after the outcome of the races started to crystalize. “It feels like a brand new day," the Brooklyn native, who was re-elected to party leadership in November, said in a released statement. "For the first time in six years, Democrats will operate a majority in the United States Senate — and that will be very good for the American people." (In assuming the role, he will swap places with Mitch McConnell, who will become minority leader.)

In his first elected position, Warnock, 51, will bring his background as a Baptist preacher to Capitol Hill. He will be the first Black senator to represent Georgia, and the 11th Black senator in U.S. history. Ossoff, 33, lost a tight 2017 special election for a seat in the House of Representatives. In his return, he'll now be the youngest senator in 40 years, since Joe Biden, and the Peach State's first Jewish senator.

“John Lewis was 23, 24 years old when he was leading the Student Nonviolent Coordinating Committee,” Ossoff told The New York Times last month. “I don’t think that young people should simply wait their turn but should engage fully in the life of our communities, and our country, and our world, and try to make a difference.”

When Warnock declared victory early Wednesday morning, he honored his mother in a live-streamed address. “The 82-year-old hands that used to pick somebody else’s cotton went to the polls and picked her youngest son to be a United States senator,” he said. “The improbable journey that led me to this place in this historic moment in America could only happen here.”