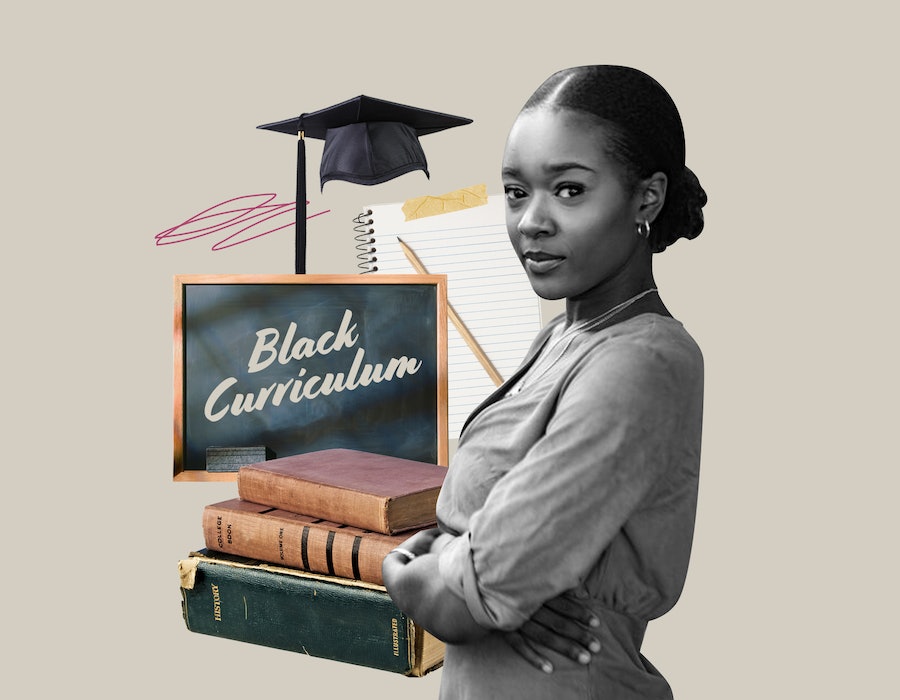 When I probed Lavinya Stennett, founder, and CEO of The Black Curriculum, about which aspects of Black British History she’d have loved to have learned in school, she sighs. “I mean, where do you start?” she says over Zoom, adding, “I think from a Black British perspective, it would have been really valuable if I had seen more Black STEM pioneers and ambassadors, and other people who work across those fields from an early age.”

Pausing for a moment, Stennett adds: “I think the [comparative] overrepresentation of [Black people] in art, and entertainment is good because it proves that we possess the incredible talent and can do anything but we’re more than what we’re shown to be.”

It’s an appropriate response given there are so many valuable aspects of Black British History to learn, and yet the British national curriculum has been known to omit most contributions and stories from Black British people.

It’s why in 2019, at just 23 years old, Lavinya Stennett began her social enterprise with the overarching aim of making it mandatory to teach Black histories in schools, because, as she explains, it can help “instil a sense of identity” and “challenge systemic issues.”

“I believe if we get it right from the beginning we will have a much fairer society. There’d be more empathy, more understanding, and more room for learning about each other as people,” she explains.

From themes such as globalisation to an in-depth retelling of 14th-century history, The Black Curriculum aims to leave no stone unturned in the pursuit of telling a “truthful” history.

By creating learning resources and training programs for schools and organisations, The Black Curriculum team and its arts-based program work to help young people (and teachers) engage with history imaginatively, and its holistic approach has been widely praised.

However, for Stennett, a rising star amongst British game-changers, the work is only getting started. Last year, the government denied The Black Curriculum’s request for the mandatory inclusion of Black histories in schools, and Stennett says the support after the BLM events of 2020 has slowed somewhat.

On The Black Curriculum’s vision

“Our vision is to encourage a sense of identity and improve social cohesion. The reason I started this wasn’t specifically to change the national curriculum and influence just one cohort of students, it’s for everyone and always has been. It’s British history and as long as [Black students] are learning in this education system, they have to understand how fully how this society works and functions. I believe if we get it right from the beginning we will have a much fairer society. There’d be more empathy, more understanding, and more room for learning about each other as people. That’s the key. We’re in the same country and have the same history, and we’re equal.”

On political leaders’ response to The Black Curriculum

“The ministers who really have the power to change and implement this have really just slapped this down. They say [The Black Curriculum] could work but it’s not going to be through us. When we petitioned them last year, they basically wrote us back saying schools are free to choose to teach what they want to teach, but keep on doing your work. The [political leaders] haven’t actively said this is important, let’s make it part of the agenda, let’s thinking get this across all schools, and let’s think about the impact of the country globally through the lens of colonialism.”

“The issues and topics we want to address are systemic, it’s deep and I wouldn’t expect them to be receptive but hopefully, in a number of years, they’ll take advice and follow suit.”

On teachers’ response to The Black Curriculum?

“It’s been fantastic. Teachers have been our biggest champions in making sure they’re funnelling through with our training and the resources we provide. One of the teachers we worked with, Robert, from Crystal Palace, used his own power and influence within the school to do so much more for the students and is a powerful example of the power that a teacher has. It’s amazing to see how teachers not only champion the work but deliver that work.”

“Everyone wanted to show some sympathy with the events that unfolded in June 2020 and pledging their support was the way they chose to show do that. But without any meaningful thinking about how [change] is going to happen, the gesture has really lacked. It’s no surprise to see that enthusiasm has dropped off a little bit but I can say there are MPs and organisations who are very much committed to this and we have the right people behind us.”

On resistance to The Black Curriculum

“Our Youtube channel proves that people are fearful. The comments ARE like ‘oooo, our children are going to being radicalized to sing Buffolo Soldier by Bob Marley in assembly.’ And, I’m like... yeah basically. It is about freedom and equality at the end of the day, so what is the problem? But there is that fear of equality meaning something is missing for people who have occupied power for so long.”

“I have an internal fire because of some of the experiences I went through. I always knew there’s so much more that could be done. I myself was excluded from school, so I know what education can look like for people who weren’t encouraged or supported within the system. So I get it.”