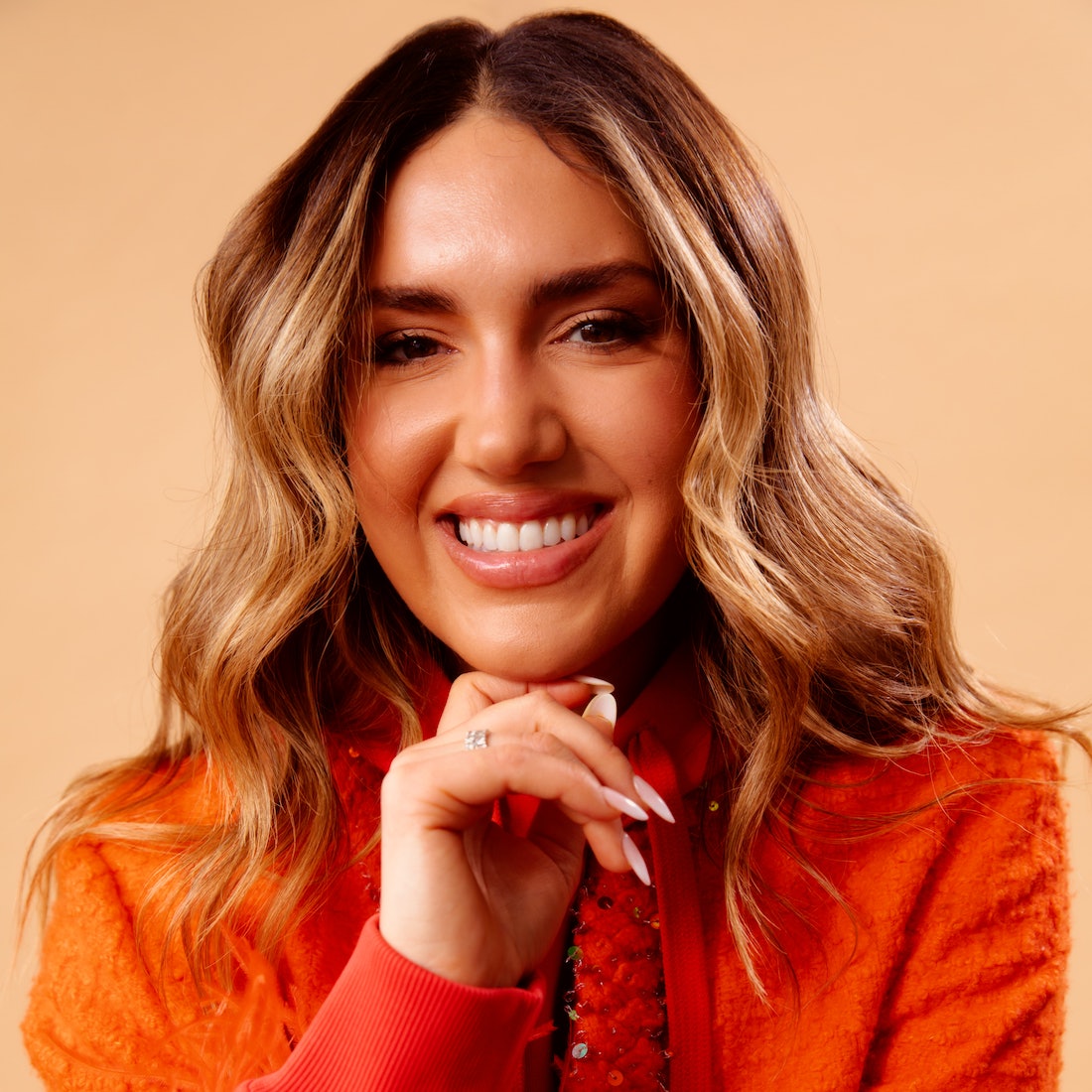 At a coffee shop in West Hollywood on a sunny Valentine’s Day morning, everybody knows Tinx. The baristas greet her like a dear friend, and gorgeous girls in workout gear rush up to her to say hi. Tinx, whose real name is Christina Najjar, is also wearing athleisure: a raspberry-colored leggings-and-sports-bra combo set with shearling-lined Birkenstocks; a gray sweatshirt with a dark green image of trees and the words “Lake Tahoe”; and a frog green Edie Parker bodega bag customized to read “Tinx.” “I wanted to wear pink for Valentine's Day,” she says.

Like Dr. Fauci, Joe Exotic, and dalgona coffee, Tinx’s fame is a quintessential 2020 success story. “I downloaded TikTok in quarantine,” she says. “At the time, I was out of work. I was a freelance writer and creative consultant, which is a nice way of saying I was unemployed and doing jobs here and there. I thought I was going to have to move home with my parents, and I was severely depressed.” Brought up on rom-coms, Tinx had always fantasized about a career working in women’s magazines. After attending Stanford University, she went into the fashion merchandising business with Gap Inc., but the bureaucratic world of business wasn’t for her, so she decided to give writing for magazines a try. Only by the time she got to the glamorous world of Madison Avenue, fashion magazines and high-paying writing jobs no longer existed. In its place was something else: the creator economy.

“As soon as I made my first video” — documenting her journey to the West Valley to get a salad made famous by the Kardashians — “I knew I had found what I wanted to do with my life. It was truly a type of fulfillment I had never felt in work before, and I loved it. I knew I'd finally found my passion. That was when I was almost 30, so it's been a whirlwind year and a half.” Since then, she’s made a burrito bowl for Chipotle and produced spon-con for Dior, and in January 2022, she signed with talent agency WME, home to Rihanna and Ben Affleck. This week she launched her new podcast, It’s Me, Tinx, with SiriusXM, the beginning of a transition into a more traditional stream of fame — and income.

“One of the advantages of being the oldest TikToker ever is that I’ve worked in corporate America,” she says. Tinx isn’t a regular influencer. She took to TikTok like a businesswoman and became a “Rich Mom.” What is “Rich Mom,” you ask? It’s Tinx’s brand. (No, she’s not a mom. She’s currently single and dating around. She’s not in a huge rush to procreate.) “Rich Mom” is a mindset, an aesthetic of Pilates classes, dropping the kids off at prep school in your BMW, and date nights at Giorgio Baldi. It’s about the image that “Rich Mom” conjures up — a fantasy of being wealthy and settled that appeals to Tinx’s fans, who one day hope to find themselves behind the wheel of a large automobile in a wealthy neighborhood. But it’s also tongue in cheek, because Tinx is not actually a rich mom like Gwyneth Paltrow, for example, the rich mom influencer par excellence who tapped Tinx for a Goop partnership last year.

Like a modern rom-com heroine, Tinx came to the big city (Los Angeles, via London) looking to have it all. Born in Washington, D.C., she grew up in a prestigious and expensive north London enclave (she documented the rigors of the latter for Refinery29 in her abortive magazine-writer era), but at 19, she was ready to come stateside. “I really wanted to experience the other side of my culture, where I had been born, and I was also watching a lot of The Hills and Laguna Beach, and I thought these people in California really had it figured out.”

Does Tinx now have it figured out? Sort of. “I'm known for hyperspecific orders at all these different restaurants. I have a dessert at Craig's named after me. I have a smoothie at Erewhon. I have my Chipotle order. It's because I don't want anyone to waste their time.” She sells an aspirational fantasy of LA life, paired with the mundane and sometimes messy reality of dating one’s way through a pool of supposedly eligible bachelors. She’s also documented her dating escapades on TikTok and became famous for her relationship advice, which is the focus of her new podcast.

This is lucrative territory. Alex Cooper recently signed an exclusive $60 million deal with Spotify for her sex-positive podcast, Call Her Daddy, but where Cooper once offered very specific sex tips, Tinx dispenses the kind of good, old-fashioned practical dating advice you would once have found in The Rules or ’90s-era Cosmopolitan. Pay attention to what he’s doing, not what he’s saying. If a guy really wants to meet up with you, he will do anything to make it happen. “You need to meet someone to see if you vibe with them,” she says, sipping her drink. And sex? “If all that you are comfortable with is being with one person at a time and having vanilla sex, that's OK. That doesn't mean you're boring. That’s just your preference.”

If this sounds like TikTok for traditionalists, Tinx has her own areas where she’s a radical. “I've dated a lot, and I really think that dating needs a rebrand.” Dating has a bad reputation as difficult, stressful, and unfulfilling. She wants to change that. Dating can also be self-exploration, not just a transactional path to a specific ending (marriage). To find out what you like, you have to see what you don’t, she says.

“If your entire goal is to get married, my dating advice is probably not for you,” she says. “They're like, ‘This is what I must do to get a husband.’ And I think it should be an era of your life, like college or being a teenager, in which you discover a lot about yourself and discover what you like about other people.”

She thinks that despite constant cultural changes to the dating scene, a lot of women still define their self-worth in terms of their ability to attract and keep a partner. “You have to learn how to fill up your cup first,” she says sipping her coffee in a corner of the cafe. “I'm obsessed with female happiness and I'm deeply concerned with some of the lies perpetuated over the last decades about fulfillment.”

She’s not against dating apps, even though “all of the onus is on women,” but she thinks societal pressure to settle down as fast as possible makes some women too quick to jump ahead with a timeline. She calls this “future tripping, fantasizing.” Everyone needs to just slow their roll, emotionally. “It’s a numbers game and you have to go on dates. He's not going to come knock at your door and be like, I'm your soulmate. However [apps] completely gamified it. It's become a massive validation tool, especially for men. Half the time they don't even want to meet up with you.”

Like Cooper, she has her own glossary of terms for navigating these challenges. There’s “boyfriend sickness,” when a friend disappears into a relationship and stops hanging out. No one is immune to boyfriend sickness (which can apply to relationships beyond heterosexuality as well).

“I had really bad boyfriend sickness with this boyfriend I had in my mid '20s,” she says, getting a little wistful thinking about it. “It was one of those relationships where it was so painful and so bad, but ultimately it taught me so much about how I never want to lose myself again. How important it is to maintain your female friendships and how you should never change your personality for a boyfriend.” Tinx knows that she may not always take her own advice. It’s aspirational for her too, to get better at dating and not keep making the same mistakes.

Until recently she documented her own dating travails to her 1.5 million followers on TikTok, giving her beaus and prospective love interests coded nicknames like a post-modern Carrie Bradshaw. But then she got burned by the hot flame that is social media stardom when her most recent boyfriend cheated on her with one of her own followers, who broke the bad news to her in a DM. “I was super in love with him,” she says. “All my followers were saying, Tinx, you have boyfriend sickness, and I did, but then he cheated on me in public with one of my followers while I was at home sleeping because I wanted to look pretty for his birthday party the next day.” I will kill him, I tell her.

This made Tinx reconsider being so vulnerable online. “I took a step back from sharing my dating life with my followers, which sucks, because I love to share with them. But I just felt like I just need to keep one thing for myself.”

She’s now focusing on building her brand instead — her line, Rich Mom Gear, sold out in six minutes, and so another drop is forthcoming — but she’s also become more conscious that she and her brand might need to be two discrete things. “A lot of people are really different on the internet. I mean, that's a funny thing about living in LA,” she says. “Actually, I feel like a lot of internet creators are way quieter in person. They have a TikTok persona or a YouTube persona and then they're totally different.”

Tinx values being the same in person here in West Hollywood as she is online. This is what SiriusXM sees in her, too. “She has a really unusual very particular talent for connecting with an audience,” says Megan Liberman, Senior Vice President of Entertainment and News at SiriusXM. “We’ve seen the kind of audience that a young woman with a powerful following can obtain in an industry that’s been largely, outside true crime, dominated by white men of a certain age. But the show that Tinx is doing is about her. I think she has the potential for a real multi-generational audience.”

In the meantime, Tinx is still looking for love. And while she says she doesn’t have a clear type, there are some traits she values in particular. “I don't like guys who take themselves too seriously,” she says. “Be ambitious, definitely be passionate, be hard working.” They also have to be able to keep the banter going in real life. “I like goofy people. Silliness is very important.”