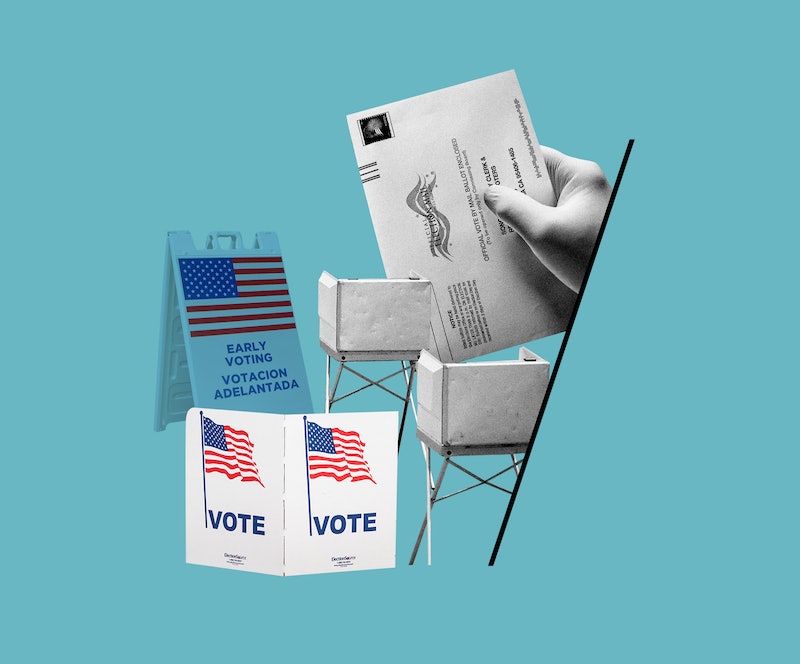 If you’ve been on the Internet at all this month, you’ve probably caught wind of President Trump’s call to delay the 2020 presidential election, which he put out via Twitter. In the tweet, he writes that mail-in voting will make this year’s elections the most “inaccurate” and “fraudulent” in history, proposing instead that we postpone Election Day until all Americans can safely vote in person. In the days following the tweet, Trump has faced rebuke from officials across party lines. Republican Sen. Chuck Grassley of Iowa might have said it best when he told The Associated Press, “All I can say is, it doesn’t matter what one individual in this country says.”

Trump's message might fit neatly into Twitter’s 280 character limit, but there’s a lot to unpack within his statement; namely, whether the election could actually be delayed. In search of answers, Bustle spoke with Chris Edelson, assistant professor in the department of government at American University, and Lonna R. Atkeson, director of the Center for the Study of Voting, Elections and Democracy at the University of New Mexico. Long story short? The election will almost certainly move forward as planned. Keep reading to learn why, and to find out what they’re actually concerned about.

Is There Precedent For Delaying A Presidential Election?

Edelson: Not that I’m familiar with. I’ve never heard of anything like this.

Atkeson: There are certainly precedents for delaying state primaries or municipal elections and things like that, but not presidential elections or any federal general elections because those are mandated by Congress and the Constitution.

Legally, How Would We Delay The Election?

Edelson: If there really were a need, Congress could change the law. Congress has the authority to set [the election date]. Now, there are limits on what Congress could do. Under the Constitution, the new president and vice president have to take office on Jan. 20.

Atkeson: The only argument you can make otherwise — and, I guess, the one President Trump would be making — is that he would have some sort of broad power under his executive authority regarding public health to delay those elections, some sort of executive power from emergency powers. But really, elections are run by governors and by states, not by the federal government. It would have to go to states to make those kinds of emergency calls, [like what happened with COVID-19 primary postponements].

How Have Elections Happened During Other Crises?

Edelson: During the Civil War, President Lincoln ran for re-election, and there were congressional elections. There were provisions made to allow the troops to vote. There had been provisions for mail-in voting during World War 2, for instance. But the short answer is, during every crisis in American history — the Civil War, World War 1, World War 2, the flu pandemic of 1918, after the Sept. 11 attacks — elections went ahead.

Atkeson: There’s no precedent [for delaying an election], which is actually very unusual. For example, if you look at the United Kingdom, they have routinely stopped elections and just continued with government instead of holding elections.

How Does The Postal Service Tie Into This?

Edelson: The president recently named a postmaster general, [Louis DeJoy], who’s a donor to [him, who’s] actually been involved in efforts to oppose mail-in voting, which is bizarre. In fact, there’s been reporting recently that this new postmaster general has set out to slow down the mail. It’s important to be careful about this because we don’t know all the details, but the concern is that the postmaster general is trying to help the president either slow down the mail to help the president win, or create an impression that there’s something fraudulent about mail-in voting in the first place, when there’s no evidence that’s the case.

Atkeson: In thinking about delayed elections, in New Mexico, we’re looking at going from 10% voting by mail to as [many] as two-thirds. That’s going to affect our ability to provide results in a timely manner. But the chance of widespread fraud for a presidential election, which doesn’t even rely on the popular vote, is slim to none.

What Do They Think Will Actually Happen?

Edelson: As of now, I see no chance of a delayed election. To their credit, Republicans in Congress responded to the president’s very bizarre suggestion by brushing it aside. But I am concerned that the president’s actions and words — and what’s going on at the post office — may be used to undermine the legitimacy of the election. Let’s say on election night it looks like the president is ahead and he declares victory, but then more counting is done, mail-in ballots are calculated, and it turns out he’s lost. What does he do at that point? He’s already laid the groundwork for saying the election is illegitimate, so he will likely say it’s been stolen from him.

These interviews have been edited and condensed for clarity.