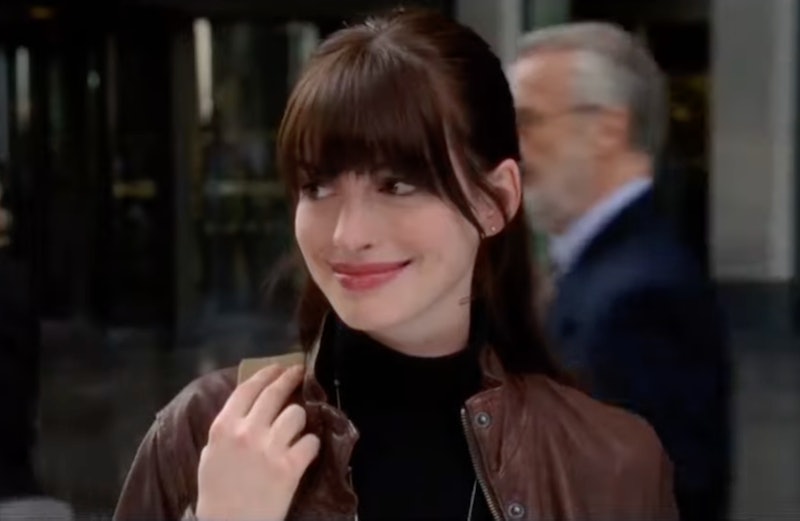 A whopping 16 years after the release of The Devil Wears Prada, Andy Sachs has returned to the world of runways after dramatically ditching steely editor Miranda Priestly in Paris all those years ago. No, there’s not a sequel on the way — instead, the revival moment is the genius work of actor Anne Hathaway, who ended up sitting next to Vogue editor-in-chief Anna Wintour at Michael Kors' Spring/Summer fashion show during New York Fashion Week.

For the serendipitous front row meeting, Hathaway recreated one of her most well-known looks from The Devil Wears Prada — bringing back the leather jacket and slicked back half-up, half-down ponytail from the closing scenes.

In the film, Hathaway plays Andy — an english graduate who dreams of a career in publishing, but ends up as personal assistant to one of the most terrifying figures in fashion. Played by Meryl Streep, Runway’s fictional editor Miranda is believed to be heavily based on Vogue’s editor-in-chief, and the film itself is an adaptation of a novel by Wintour’s former personal assistant, Lauren Weisberger. Though countless designers declined offers to work on the film, reportedly because they feared angering her, Wintour apparently took the satirical story in her stride according to screenwriter Aline Brosh McKenna. “Anna came to the first screening in New York,” she told Entertainment Weekly. “She sat right in front of me and [the film’s director] David [Frankel] with her daughter and wore Prada, which shows she has a great sense of humour!”

This time, however, it was Hathaway’s turn to subtly acknowledge their connection through fashion, and though she resisted the temptation to rock up in a cerulean blue sweater. Instead, the actor recreated her iconic brown leather look from the closing scenes of the film. Though the jacket itself is a bit of a crocodile-skin glow-up, her glossy fringe and red lippy are absolutely on point. Genius.

Adding to the serendipity of the whole situation, Hathaway later spoke to Vogue — yep! — about her outlook on fashion, and her choice of outfit for the runway show. “For me, you have to be able to live in your clothes, and this is a very wearable look without sacrificing any of the style,” she said. The actor added: “When I was a younger actress, a lot of the things I did were based in fear, wanting to do something right, and now I don’t mind doing things wrong. I don’t think I’ll fall apart, and the stakes don’t feel so high. So I’m dressing with a lot more gratitude and a lot more joy.”