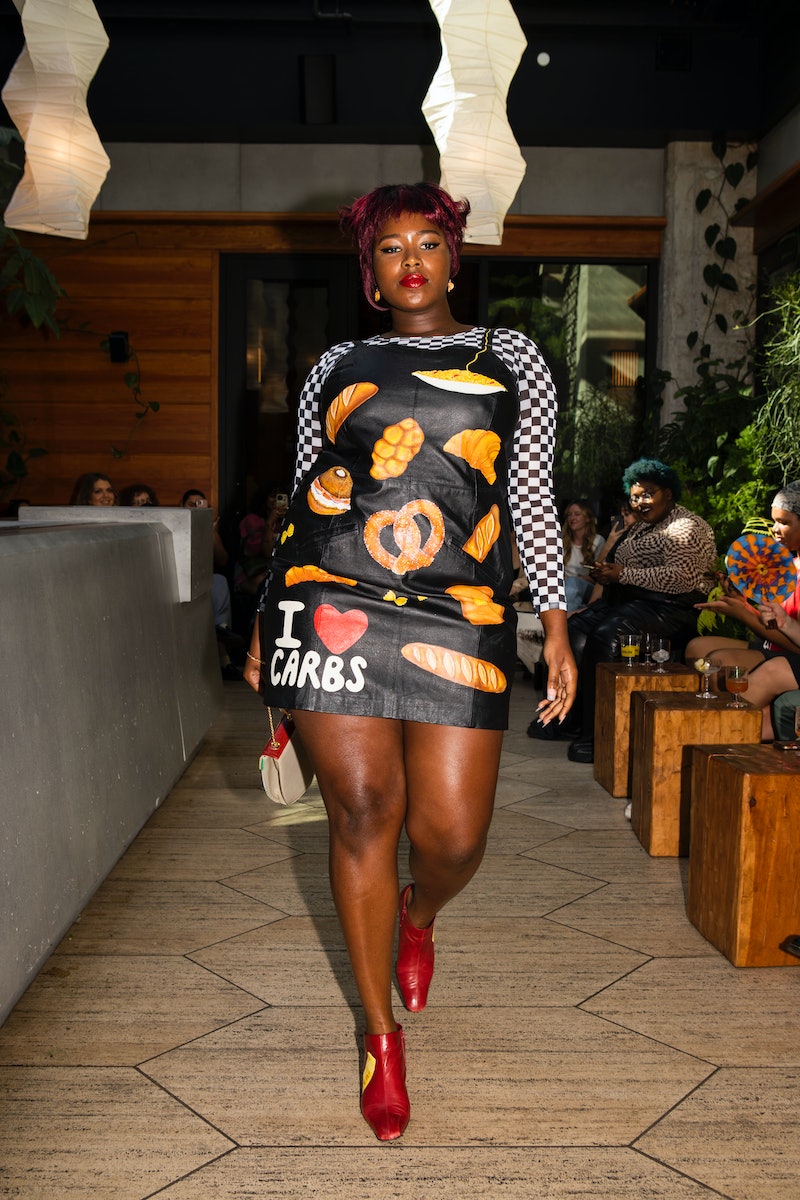 If we can all agree on one thing about the Spring / Summer 2023 New York Fashion Week shows, it's that the size diversity on the runway was sorely lacking. Celebrities and influencers alike spoke out about the shows' lack of plus-sizes, including model Tabria Majors, who called for designers to "make it in my size."

Still, there was one show that stood out among the rest. Berriez, a Brooklyn-based brand "curated for curves," hosted a show at the Ace Hotel in Brooklyn on Saturday, September 10, titled "Vices." Each design was made using reworked vintage and represented a specific vice, from cigarettes to "mary jane," to wine and carbs. Because of the difficulty finding vintage plus-size pieces, the brand focuses on sizes XL-5X specifically. Another perk? All their clothes fall below $300.

Just watching Berriez fashion week show recaps, the selfies posted from the audience, and the models' behind-the-scenes pics, the joy is palpable. From the emcee Madelynn Poulson who had the crowd in stitches, to relatable vices like carbs and martinis (*waves*), the venue was filled with community and representation.

Emma Zack, founder of Berriez, spoke to Bustle about the moment and why it was so important. "I see the same two plus size models — who are both stunning and amazing — but they walk in every show, and people really think, 'We're so inclusive,'" Zack said. "From jump-starting Berriez, I just wanted it to be an inclusive space where you not only feel seen but also heard, and you're able to shop no matter your size." The designer was also intentional about not just including what she referred to as the typical coke bottle-shaped plus-size models but models of all shapes and sizes that reflected her community in their runway presentation. "I wanted to make sure that we had multiple sizes, multiple gender representation, different racial representation, different age representation because everyone's beautiful... I'm going to do it no matter what, and I'm going to do it the way that I see is and the way that my community wants to see it."

Model Jordan Underwood celebrated Zack's accomplishment with the Berriez show on Instagram after walking as the vice 'Stoner Sam.' They shared, "I've seen a lot of criticism regarding the lack of body diversity at NYFW this year. Obviously, I agree. However, what frustrates me is that this criticism exists without any modeling of what we want to see.” Underwood went on to say that talking about the problem isn’t enough. “Aimless yelling about the lack of body diversity without uplifting the fat models that are ready and willing to get booked is going to produce zero change, and we have an example of a brand that is doing the work to include people of all sizes, races, abilities, and genders in their work, during and beyond NYFW,” they said.

Sarah Chiwaya, a plus-size blogger known on social media as @Curvily shared her thoughts on how the show compared to the NYFW main stage. "As someone who has attended NYFW for nine years now, this season was a remarkable backslide in terms of size inclusivity, both on and off the runway. The Berriez show, with gorgeous size diversity, a vibrant crowd, cool designs, and a subversive theme (celebrating "Vices" when fat people are usually scolded to abstain across the board), was one of only a handful of shows that embraced plus size babes. At many other shows, we were an afterthought at best - or just outright excluded."

According to Zack, the answer to how to make these changes more broadly is simple. "Just do it," is the advice she has for designers. "If you're so scared of putting clothes on a fat model, why don't you invite them to your studio and do fittings on them and see how the clothes lay? I just want the same clothes. So if you just maybe have some respect and consideration for people above size 12, and maybe talk to them. There's this whole white supremacy, thin privilege. All of that wrapped into who's getting hired to walk these runways. Let's dismantle all of that. Stop making excuses and just do it."

Don't worry if you missed the show. You can still catch the vibes on Berriez Instagram.

You can shop some of Berriez fun vintage and collaboration pieces below.