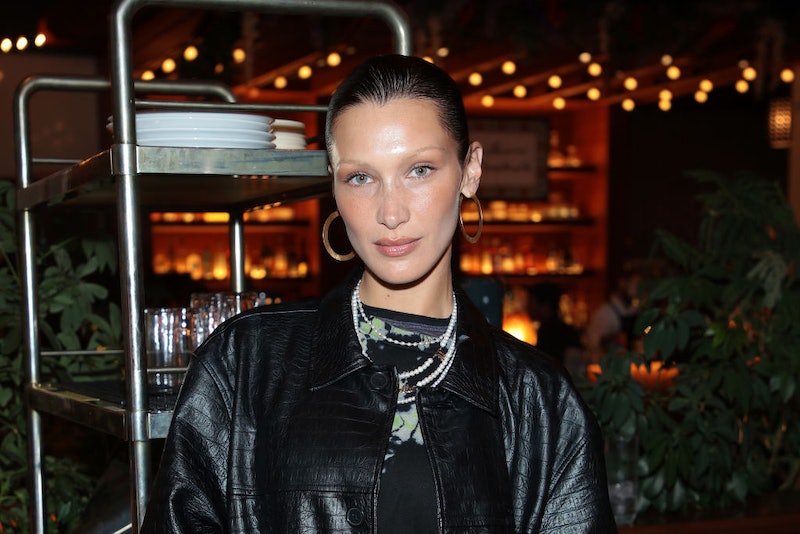 After I’ve had what seems like a life-long battle with my eyebrows, I’ve come to find out that celebrities are actively bleaching their brows — and now that’s apparently the most fashionable way to style your arches. As one of surely millions of people who has spent hours plucking, shaping, and even microblading for thick and perfectly defined brows, one can’t help but shake their head at the fact that A-listers are now going with the “invisible” look, ridding the appearance of any brow hairs altogether. It’s giving sexy Voldemort and TBH I’m here for it. So how exactly did this happen, you ask? Let’s take a look.

As of late, the trend has been dominating fashion week. On June 29, Marc Jacobs had his fall 2022 fashion show; strutting down the runway were models — including Bella and Gigi Hadid — rocking bleached eyebrows and a deep undercut hairdo. The supermodel sisters were also seen in the invisible brow look for Versace’s fall 2022 show. Bleached arches have been making an appearance on the red carpet, too: Both Maisie Williams and Kendall Jenner have worn the trend to the Met Gala — Jenner in 2022 and Williams in both 2021 and 2022.

More and more celebs have been jumping on board: Julia Fox, Kim Kardashian, Halsey, Lizzo, and Jenner are just some of the stars who have taken this unconventional trend out for a night on the town (or red carpet). Halsey’s take on the look, for instance, gives off an ethereal, fairy-like vibe.

In actuality, though, the bleached brow had its first big moment in the 1990s as a staple of the punk community — often sported by the sexually-liberated teens of the time. That said, Joey Healy, eyebrow expert and brand founder, says it’s important to recognize the influence that 1970s and ’80s drag culture has on this trend — respecting the common practice of blocking out their brows with glue. Even though drag queens and the punk culture revolutionized the invisible brow, it finally started to grab the attention of mainstream media and fashion in the ’90s. “The bleached brow went kind of hand-in-hand with skinny brows,” Healy tells Bustle. “The brow was not becoming the main facial feature: Instead, it was defining the lips with dark lip liner and frosting the eyelids with eyeshadow.”

To understand the hype behind the look that’s a far cry from the fluffy arches craze, Bustle talked to Benefit Cosmetics’ global brow expert, Jared Bailey, who first points out that — as is the case with other beauty fads — brow trends are cyclical. “Invisible brows often reemerge to help create a futuristic look,” he tells Bustle, noting that the look dramatically changes the proportions of your face by making the forehead appear larger and broader. “This, combined with the disappearance of one of our most primal features, helps create a look that’s intergalactic,” Bailey tells Bustle. Healy adds that it also gives off a high-fashion editorial vibe that certainly turns heads.

As more celebrities continue to experiment with this trend, you may become bold enough to try it out for yourself. The upside? You don’t necessary need to use bleach — in fact, Bailey encourages you to skip it if you’re just experimenting. According to him, it’s easy to recreate the invisible brow look without the hassle of losing your eyebrow color completely. Here’s how to do it:

Step 1: Find a full-coverage matte concealer that’s a true match to your skin tone. This is important because you want it to fully blend into your skin. For more of a bleached look, Bailey says to use a lighter concealer with a yellow undertone.

Step 2: Brush a small amount of concealer through your brows using a clean spoolie. Let it set and dry completely. Depending on the depth and color of your brow hair, you may repeat this step several times. Once your brows are fully coated, they will appear invisible.

Step 3: This part is optional, but if you don’t want to lose the framing and structure the brows bring to your eyes, take an ultra-fine micro-lining pencil with a neutral undertone to lightly underline the brow. With a hard angled brush, gently buff the line upward into the brow hair to create a shadow underneath the brow. This will give a soft structure and proportion to your face and eyes.

More like this
Blake Lively Debuts Red Hair For The 'It Ends With Us' Film Adaptation
By Olivia Rose Rushing
The Best Beauty Looks Spotted At Paris Couture Week 2023
By Audrey Noble
15 Modernized '60s Makeup Looks & Hairstyles That Feel Wonderfully Retro
By Olivia Rose Rushing
Hailey Bieber's New Bob Is Short Haircut Goals
By Olivia Rose Rushing
Get Even More From Bustle — Sign Up For The Newsletter
From hair trends to relationship advice, our daily newsletter has everything you need to sound like a person who’s on TikTok, even if you aren’t.