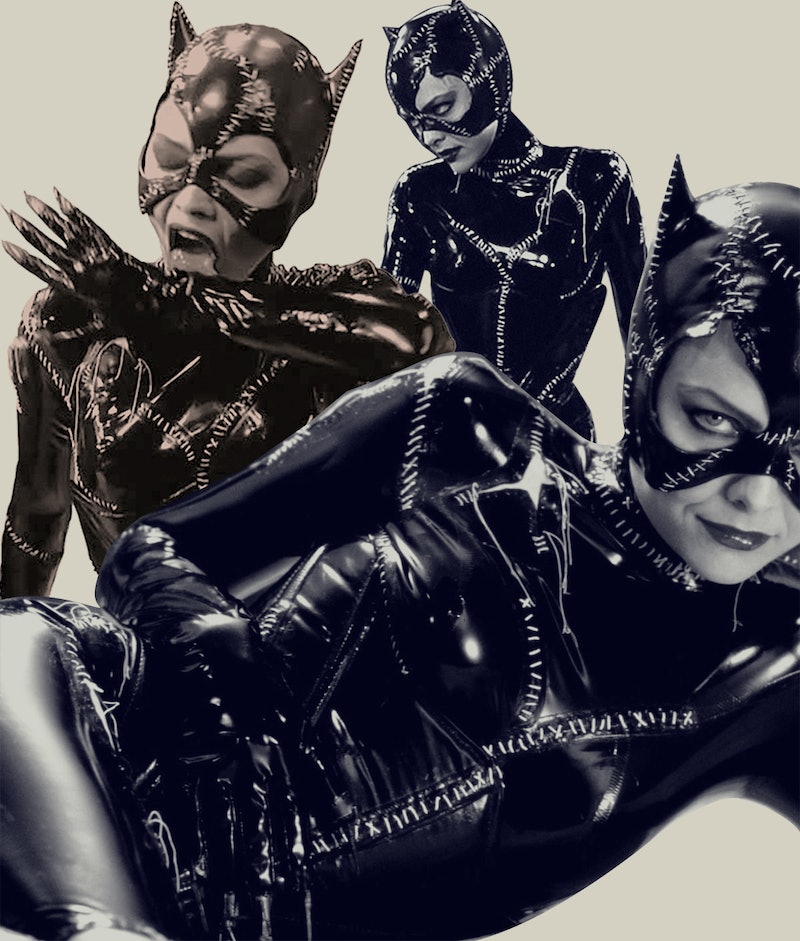 Recently, images of Zoë​ Kravitz as the new Catwoman flooded the internet. She’s seen descending stone stairs in a latex-like trench and a fascinator of the same texture. Her role, like the other Catwomen who came before her, will undoubtedly mean kicking ass and serving looks.

But Catwoman, also known as Selina Kyle, was not the picture of self-possession when I first saw her on screen. I was about 8 years old watching Batman Returns with my brother. Few may remember how Michelle Pfeiffer’s character is first introduced — a lonely secretary who isn’t taken seriously by her elitist boss, a wilting damsel in distress frustrated by the men in her life as well as her nagging mother.

This portrayal made witnessing Selina Kyle’s transformation into Catwoman all the more transformative for me. I’ll never forget the mess of metal wiring and haphazardly placed cuts of latex that made up her iconic costume. The black fabric coated her in a way that made her seem as hard as concrete yet as light as air. Everything ricocheted off her glistening frame.

By slipping into a suit of her own creation, Selina was freed from her inner struggle and lack of confidence. I wanted to use fashion as an armor, too.

Like most kids, I struggled to find my strength and my own style. For a long time, “fashion” was fully dictated to me by my peers who shopped at only one place. I vividly remember making my mom wait outside as I ventured into the beachy-cave known as Hollister, shelling out all my 11th birthday money for a single cotton T-shirt with the logo emblazoned across the chest.

Wearing that top made me feel good — because it made me feel invisible. Years of my young life were spent looking at clothing this way: as a separate entity rather than as an extension of myself, an enemy even.

But looking up to characters like Catwoman — heroines in thick, black, liquid-like suits and jackets, as if their bodies had been dipped in molten-hot tar — helped me realize that fashion could be about more than blending in. In their suits, no grip, mental or physical, could contain them. They’d maneuver through a heated conversation or fight scene with ease.

Layered with gloves, zippers, buckles, and all forms of utility, fashion was used to serve their needs and, above all, to protect themselves. Whether hero or villain, their clothing was an extension of their personalities, with an outer layer so infused with inner mental strength that it was as tight as skin. It could act as a shield or a projection, but either way the wearer was in control.

By slipping into a suit of her own creation, Selina was freed from her inner struggle and lack of confidence. I wanted to use fashion as an armor, too.

It’s taken me a long time to get to that place where I feel fully in control; 20 years since watching Catwoman crack her whip, in fact. I finally have a grip on how I’d like to walk into the world every day, letting this feeling drive decisions about what to purchase or wear, not what I think people want to see.

Once she transformed fully, Selina Kyle didn’t lose her cool if the latex suit was off — it was always just a touchstone. I now think of my clothes this way. Sometimes mine is a matching pantsuit, other times just a coat of lipstick.

Thrifting especially, makes me feel as though I’m making conscious decisions from an immense array of choices. On days when I don’t know who I want to be, I can slip into a piece of clothing that offers me an alter ego, like my recently thrifted floor-length black leather trench coat. It whips behind me with each step, like I could kick off from the ground and fly away.

Although only a few stills from The Batman film have been released, I look at the single image of Kravitz and wonder how many young people might see their reflection in her outfit’s shine. I’d like to think of them imagining their own possibilities and potential transformations like I once did.

Whether you are metaphorically slaying villains or tackling your own inner demons, characters like Catwoman have reminded me through the years that it’s always possible to present yourself with power.