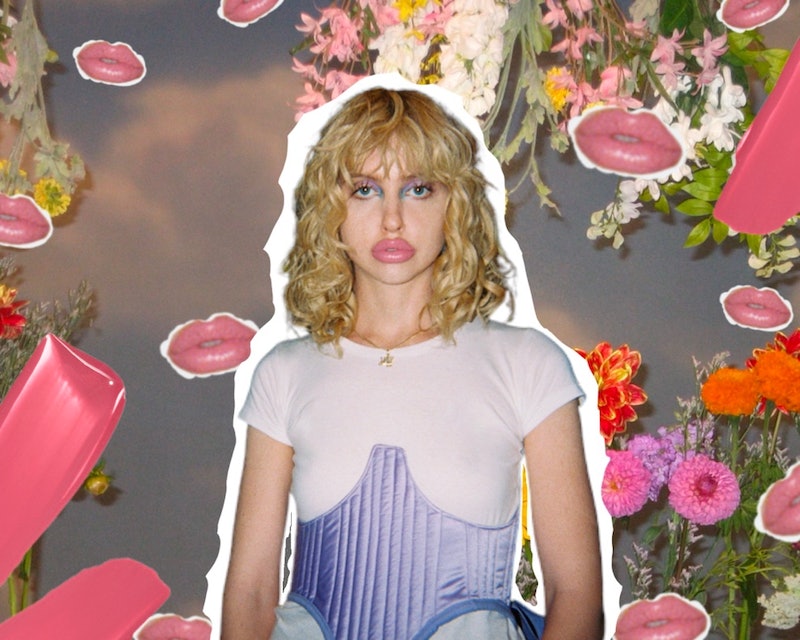 Chloe Cherry has a memorable face. Even if you haven’t watched the second season of Euphoria — in which Cherry plays drug dealer Fezco’s heroin-addicted, bubbleheaded roommate Faye — you’ve probably seen production stills of Faye decked out in her Y2K best: denim micro-minis and pastel pink halters, babydoll tees and rainbow-beaded necklaces. In pretty much all the pictures of Cherry as Faye, her arms are crossed or otherwise shielding her body; her full lips are pursed in either judgement or concern.

It's that memorable pout that makes Cherry’s newest gig a no-brainer: As the face of Urban Decay’s new Vice Lip Bond liquid lipstick, the actress gets to show off her signature glossy-lipped look to full effect. “I love making [my lips] look super big and juicy and plump,” says Cherry, and the new product suits that look perfectly — on the day that we talk, she’s sporting the shade Unbreakable, a candy-apple red with a glassy sheen. “Look at this,” she says after we’ve been talking for half an hour, brandishing the water bottle she’s been sipping from all interview: not a single lip smudge to be seen. “I’ve never had a red lipstick act like this before. Red lipstick comes off on your teeth and your cheeks and your hair — this is the only red lipstick I would ever wear, because other red lipstick is so messy.”

Now beloved by Hollywood and the fashion industry alike for her personal aesthetic — uber-femme, ultra-flirty — the actor first discovered the transformational effects of makeup in just third grade. Her first weapon of choice? A baby-blue eye shadow she found in her friend’s room. “It was a pale powder blue, and it was sparkly, and we loved wearing it with no other makeup — just a bunch of blue eye shadow,” she says. “It makes you feel like a Disney princess or a fairy.” That phase kicked off a years-long makeup evolution that involved a “goth, kind of punky, kind of emo” black eyeliner phase in middle school, neon glitter liner in high school, and eventually to her current pared-down, signature look, which she describes as “very simple; just concealer and mascara and eyebrows and a little bit of blush” — and her beloved “juicy and plump” lip, of course. “I love a pinky nude, and I love over-lining my lips,” she says. “My everyday shade for the Lip Bond would definitely be Text Em, which is perfectly my color.”

Unlike her peers, Cherry never had to hide her edgy makeup choices from her parents or stifle her self-expression (she laughs recalling how her mom always preferred her in an electric green-blue eyeliner over traditional black). Born to two artists in Lancaster, Pennsylvania, Cherry grew up admiring her parents’ creative skills. “I was never able to draw and paint and do the technical stuff that they did,” she recalls. “I searched my whole life to find out, like, what kind of art can I do? What kind of artist am I?” Eventually, while in high school, she found it: “I discovered collaging in art class, and I was like, whoa, this totally resonates with me. I love putting things together, I love curating things, and I’m able to make beautiful images that portray some kind of thought or idea.” In her work as an artist, Cherry often pulls from music, especially rap and hip-hop — with Mac Miller, a fellow Pennsylvania native, serving as a frequent source of inspiration. Her dream is to one day have musicians tap her to create collages for their album art — or to expand into music herself. “I want to come out with a rap song,” she states definitively. “I’ve come out with three already, but they’re only on Soundcloud.”

In the meantime, the fashion industry has its hooks in her — and doesn’t appear to be letting go anytime soon. Since premiering as Faye in Euphoria, Cherry has walked for LaQuan Smith during his New York Fashion Week show (“I will for the rest of my life be so honored that I was able to do that,” she says) and starred in a SSENSE-exclusive Versace campaign. She’s hoping for design opportunities in her future, as well. Cherry’s already come out with her own line of merch on her website, ChloeCherry.com, which met with immediate success. “People liked the merch that I did, so maybe I could design other stuff,” she says. “I could get into having a little line of clothes.”

For the foreseeable future, Cherry has her sights set on continuing to act, name-checking Bo Burnham, Harmony Korine, and Jonah Hill as her favorite directors. As far as roles she’d like to play, she hopes to go farther afield after Faye: “I think it would be really cool to portray somebody very, very good, somebody that’s very opposite of me — like a nun, somebody who’s religious or someone very strict,” she says. But darker projects hold a certain appeal for her, as well. “I would love to do a weird horror for A24,” she says. “I’d love to portray a very intimidating female role or be super weird and freaky — something like a stalker.”

Knowing Cherry, there’s no doubting that this wish — and all her others — will come true sooner or later. It’s just a question of when.