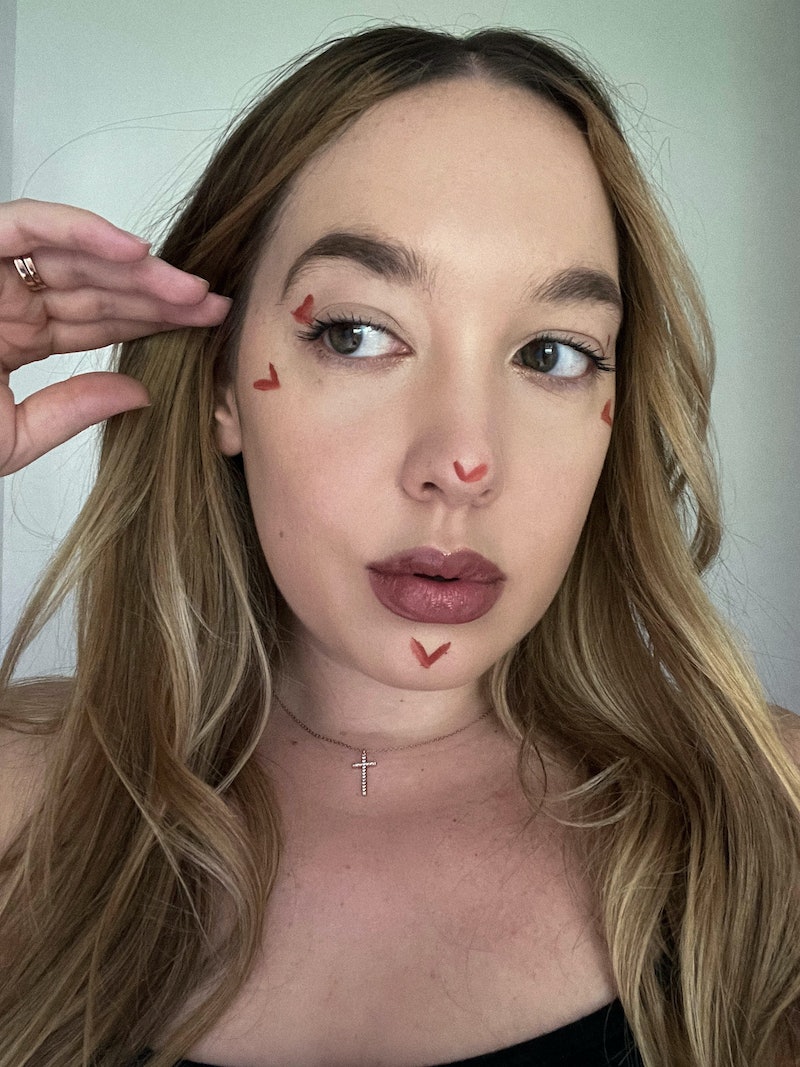 As an admitted late night TikTok scroller who just so happens to be obsessed with excessive amounts of blush (anyone else?), it makes sense that I would be a total mainstay on BeautyTok. From blush contour to liquid blush placed directly under the eyes, it seems I’ve tried many of the viral hacks when it comes to flushed cheeks — but the latest on the platform seriously caught my attention.

Douyin blush is a trend that is all about where you place your product. Originating in China, and since, gaining speed across Asia and amongst the TikTok-obsessed, the name is inspired by Douyin, which just so happens to be China’s version of TikTok. On Douyin and throughout many parts of Asia, the beauty ideals are often centered around a doll-like look that prioritizes the appearance of doe eyes, youthful features, and coquette-ish, blurred lips one may associate with the K-pop icons of the world (like the ladies of BLACKPINK, for example). A major part of creating that sweet appearance? Well, blush.

After stumbling upon countless videos surrounding the unique trend, with oddly placed v-shaped marks all over creators’ faces, I had to give it a try for myself to see what the hype was about. Here’s what happened.

With a highly-pigmented liquid blush (I opted for Rare Beauty’s Soft Pinch, of course, in the deep terracotta shade Love), I applied the product on my chin, the tip of my nose, at each outer corner of my eyes, as well as on the high points of both cheeks. Spritzing a bit of setting spray onto a beautyblender, I began buffing the product out until it appeared soft and natural.

The result? While I’m personally not quite sure about the ultra-blushed chin on myself, I must say — the effect is pretty sweet and sun-kissed, subtly mimicking the TikTok-viral “sunburn blush” trend.

In particular, I surprisingly loved the placement of the blush on the tip of my nose, though I may opt for a more pinkish hue in the future rather than a deeper terracotta shade for my light complexion. On the other hand, the nose felt sort of “off” and unfinished until I placed some brightening highlighter just on the tip and bridge, breaking up the dark blush that seemed muddy and too burnt for my liking.

I also loved the placement of the blush on my temples and eyes, as it created a lifted look that felt youthful and bright — so I definitely will be adding that trick into my current routine.

Overall, I do think a softer colored blush would suite me a bit better — but I do like how fresh, sunny, and sweet the final look ended up being. Pro tip: next time I give this trend a try, I will definitely start with a more subtle shade and slightly less product, which you can always build up and layer until it’s just right.

More like this
Confused About Blush Placement? This TikTok Makeup Hack Will Help
By Olivia Rose Ferreiro
I Tried Item Beauty's Lip Quip, & Here's What All The Hype Is About
By Olivia Rose Ferreiro
The 10 Best Emmys 2022 Makeup Looks
By Paris Giles
This Week’s New Makeup Releases & More Beauty Headlines
By Audrey Noble and Erin Stovall
Get Even More From Bustle — Sign Up For The Newsletter