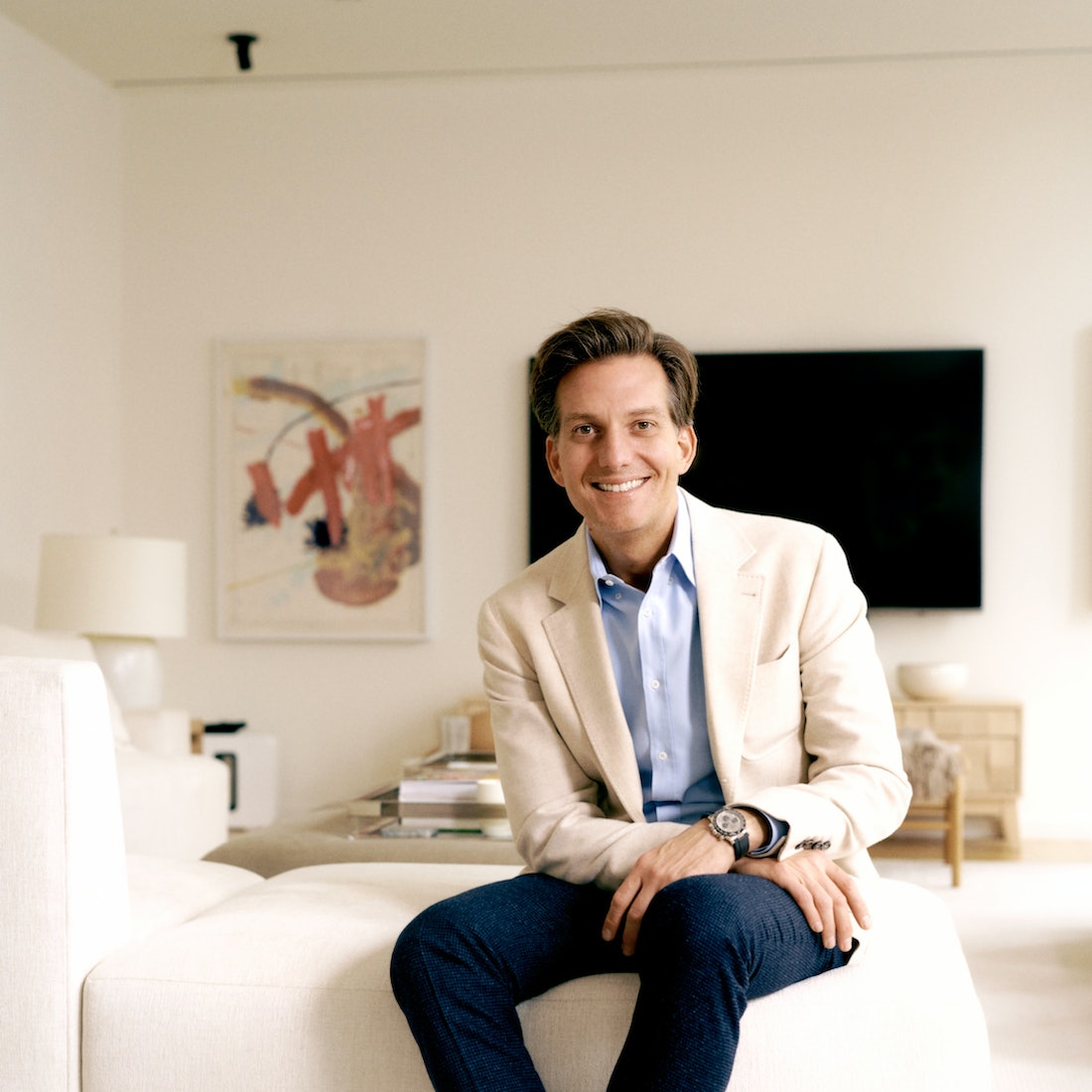 It’s easy to spot bad veneers. When dental veneer work is bad, the veneers — thin, translucent porcelain shells permanently bonded to existing teeth — are the only thing the eye can see. When dental veneer work is good, on the other hand, the veneers disappear. And if a set of veneers is quietly perfect, like a high-end cashmere sweater, it is likely the work of Dr. Michael Apa. Kyle Richards is an Apa client, as is beauty influencer and makeup mogul Huda Kattan. Mario Dedivanovic, a man whose teeth are often eye-level with Kim Kardashian, is also an Apa client, as are Ashley Benson, NikkieTutorials’ Nikkie de Jager, Patrick Ta, Dr. Barbara Sturm, and Chloë Sevigny, along with many other more discreet celebrities.

Naturally excellent-looking teeth are not cheap. A single veneer can range from $3,000 to $5,000, which means that a full mouth of perfectly imperfect, wabi-sabi, bespoke porcelains could run upward of $50,000. Veneers are an investment, like a Viking range or a finicky Ferrari. They need to be cared for just as one might their original teeth because they are the original, but better.

Long ubiquitous among celebrities, veneers are now de rigueur for influencers too, many of whom won’t hesitate to post before and after pictures during a TikTok “veneer check” challenge. As interest in veneers grows, so does the profile of a small group of celebrity dentists – as in, dentists to celebrities, but also dentists who have reached celebrity-level fame themselves. Of them, Dr. Apa sits at the very top.

Serving the high-end veneer clientele takes a village, as I discovered boarding Apa’s chartered private jet in early December. Every three weeks, Apa flies to the West Coast, and then, shortly after his return to New York, is off to his Dubai outpost for another week. Apa routinely travels to the Beverly Hills office with two dental assistants, three ceramists, and a personal trainer. The flight is almost six hours long; the team eats dinner, and then eventually, everyone puts on an eye mask, slips their feet into cozy socks, and falls asleep.

Apa, who is 44, spends some time scrolling through his Instagram like he is Bill Belichick (a man he can relate to) reviewing game tape. He looks over the before and after photos of his own work, taking note of what he could do better. Interspersed between photos of happy clients proudly baring their new investments are videos of Apa delivering bite-sized master classes on the art of cosmetic dentistry. Apa himself makes appearances, too, photographed in tasteful sportswear, seated by the window of a private jet or sitting in an airport’s first-class lounge — an advertisement for the lifestyle his clients enjoy and that he himself has achieved by serving them.

Apa hails from Clifton Park, an upstate New York town far from the private jet circuit. His father worked in insurance and his mother was a high school librarian. Growing up a “fat kid with not a lot of money in upstate New York,” as he puts it, he knew he wanted to be a dentist by age 5. “It’s not like I had some deep passion for dentistry; I think it was more like [I knew] I would be successful if I was,” he says. Apa briefly considered a career as a pediatrician, but after a bout with serious illness in his youth — “some awful, weird liver disease where they thought I was going to die” — and watching his mother crying on the phone with a pediatrician, he says he thought to himself, “I don’t want that responsibility.” His grandmother worked in a dental office, and her boss looked to have a life of relative leisure. “Oh, this guy’s golfing on the weekends. He lives in the nice neighborhood of Clifton Park. This dude’s living,” Apa recalls thinking.

In high school, Apa’s dentist gave him an audiotape of Dr. Larry Rosenthal, then the preeminent cosmetic dentist (“He was a superstar. He was on Oprah. He was doing stuff that no other dentist fathomed,” Apa says), and his path became clear. He would go to NYU’s dental school, like Rosenthal did, then meet Rosenthal, and make him his mentor. Apa started working for Rosenthal out of dental school and eventually purchased the practice from Rosenthal; both men work out of the New York office now.

According to Dr. Gary Ruth, an oral surgeon who works with Apa, Apa’s success lies in his innovation. “He’s a genius at solving complicated dental puzzles,” Ruth says, “and that’s what dentistry is.” Dr. Charles Pincus invented snap-on veneers in 1928, as a quick solution for Hollywood actors starring in the new talking films; the modern method of adhering veneers to the teeth, which includes etching the teeth and applying a bonding resin, was developed in 1982. Since their invention, veneers have grown less Chiclet-y and more popular, especially for those already in the habit of non-invasive cosmetic enhancements like lip fillers or microblading. “A lot of dentists will do a few of these cases every year,” says Ruth. “Dr. Apa does a few of these cases every single day. It’s never been done before in the history of dentistry.”

What makes for excellence in the field of cosmetic dentistry is subjective and intensely personal. Julia Roberts’ famous grin works for Julia Roberts, but those teeth in anyone else’s head would look and feel obviously fake. Perfection isn’t necessarily about straight, white teeth, Apa explains as the jet crosses the Midwest, the remnants of a pizza and side salad sitting in front of us. “They’re asking for teeth that are flattering,” he says, an improved version of nature. The work “is not just aesthetic,” Apa says. “They have to use [their teeth] to function.” Scrolling through his Instagram feed, he shows me a before and after of one of his clients, a 55-year-old woman. In the before photo, life and normal use has worn down the edges of her admittedly already-decent teeth. The after is like the moment when the optometrist finally flips the correct lens in front of your eyes, as if the teeth have come into focus.

Back in New York City, I got a taste of the Apa experience. In the Central Park South neighborhood office lobby, a Diptyque candle flickered next to a small but pungent display of Venus et Fleurs roses. I watched as Apa dipped in and out of exam rooms, moving with precision and ease. He greeted me and, with a quick glance, diagnosed me with a cross bite. He whisked me into a waiting examination room, where a dental hygienist with a gentle touch scanned my teeth for the night guard that would arrive in my apartment in a few days.

Everyone in the office exuded a seriousness to match Apa’s. Murilo Calgaro, one of Apa’s master ceramists, left a successful career in Brazil, where he founded a dental institute in his own name, to work with Apa. The two met in a WhatsApp group for dentists and ceramists, and Calgaro, moved by Apa’s passion, relocated to work with him full time. “There is a bond for me as a dental technician,” Calgaro says as I observe him at work in the lab, mixing pigments to make the ideal shade of just off-white. He and the other ceramists treat each handmade veneer like sculpture. “What I do is not only making teeth,” he says. “I know that this will be in his or her mouth for many years, so it’s kind of giving myself to someone. And when things don’t go right, it hurts.”

My experience at the New York office was more pleasant than any dentist office I’d visited in my life. Then I went to the LA location. There, every surface is clean, white, and seamless. All patients are presented with a list of amenities, including lip balm, a TV with access to every streaming platform embedded in the ceiling, nitrous gas, and a cannabis menu. It’s difficult to hear the drill whirring right next to your head when you’re wearing a pair of Bose noise-canceling headphones, watching Hawkeye, and hopped up on the gas. Also for sale is Apa’s Apa Beauty product line, which includes an electric toothbrush, a teeth whitening system, tooth gloss (“like Vaseline for your teeth, but better,” his publicist tells me), and a $35 lip balm that is highly recommended by The Strategist. The Apa experience — what he calls “people just doing good old-fashioned, clean general dentistry in an amazing environment” — does not come cheap. A cleaning is $350 and he does not accept insurance. But like with most things, sticker shock fades when the results are exemplary.

Sitting in his all-white private office in his all-white dental practice in Beverly Hills, at the end of my second day with the team, Apa brings up Tom Brady, not for the first time. “Tom Brady works from the chip,” Apa tells me, as in the chip on his shoulder. “I think I work from the chip. When I was younger, I was probably a little overt in making sure people knew that I was good. I was insecure. I overcompensated like crazy, and now, for the first time, I don’t have to.”

“It’s kind of easy when you see the path to the top,” he says. “You just have to follow that path. Then when you’re at the top, you have to actually create a new path.”