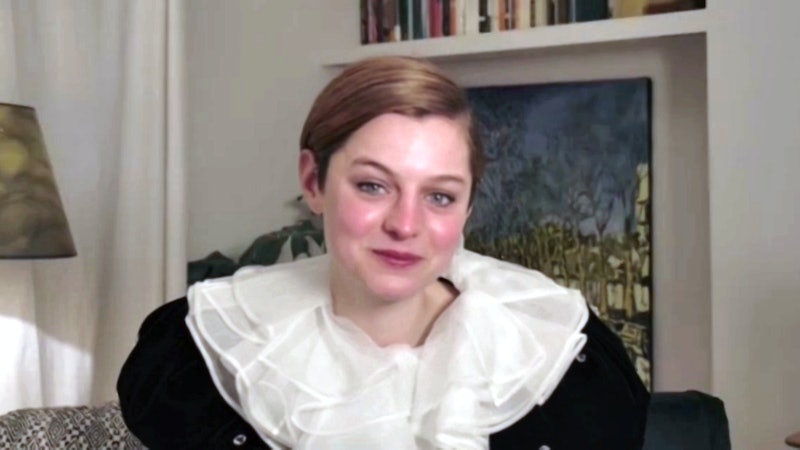 First she dazzled as Princess Diana in The Crown. Then she (virtually) stole the show at the 2021 Golden Globes in Miu Miu. Now, Emma Corrin is raffling off her designer dress in aid of The Survivor’s Trust.

"I’ve been aware of the incredible work that The Survivors Trust do for a while now and have wanted to find a way to launch a working relationship with them, to help raise money to fund all the crucial support they provide for survivors," said Corrin about the raffle.

The Survivors Trust CEO Fay Maxted revealed she was thrilled to have been approached by Corrin: “The impact and reach a celebrity can achieve for a cause is massive,” she said. “One of the biggest problems facing survivors is awareness of the support that is available for them. We often hear from survivors that it has taken them years, sometimes decades, to find out about a local support service offering the specialist counselling they need."

The idea to make the charitable donation a raffle rather than an auction was a strategic move on behalf of Corrin, who hopes it will be more accessible for those wishing to own the designer dress, as well as those who want to donate. The actor also had a say on the gown’s design itself, per Harper’s Bazaar. Together with her stylist Harry Lambert and the Miu Miu team, Corrin’s Golden Globes dress – inspired by the Pierrot Clown; exaggerated shoulders and ruff included – came to life. Now The Crown star is hoping it will go on to have another life, too.

"I think that in general our social consciousnesses have been broadened over the past year, the gap between wanting to effect change and making an actual difference has closed,” Corrin reflected. “The time to act is now. And especially when it comes to sexual assault and sexual violence, there has never been a more important time to raise awareness of the support survivors need. Calls to their helpline have increased by 174% compared to this time last year, and visits to their website seeking support and information have increased by over 70% in the same time.”

Corrin also posted a passionate letter on the need for safe spaces and importance of understanding issues around rape and sexual abuse via her Instagram.

Raffle tickets cost only £10 to enter, with all proceeds going to The Survivors' Trust, which works to provide counselling and support services for women, men, and children who have experienced rape, sexual violence, and sexual abuse in the UK. At the time of publication, the raffle has raised almost £900 and will remain open until March 28, at 8 p.m.

Find out more about the raffle and enter here.