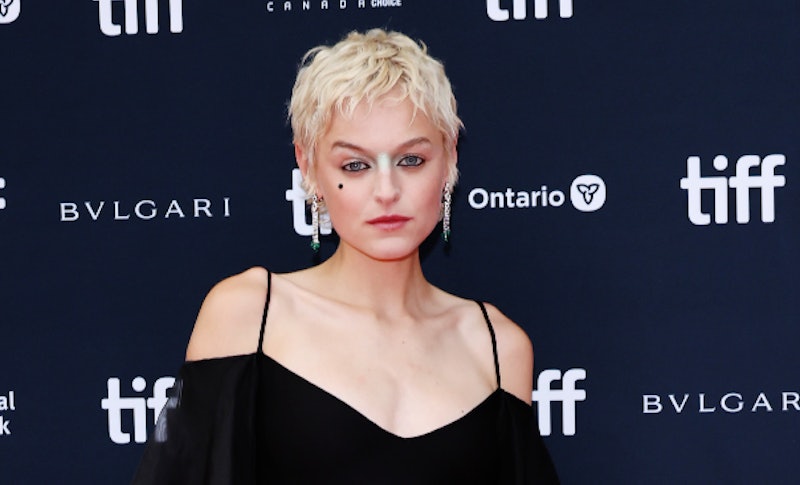 The Toronto International Film Festival (TIFF) hosted the hotly-anticipated premiere of My Policeman, featuring The Crown’s Emma Corrin and Don’t Worry Darling’s Harry Styles, on Sept. 11. The film, also starring David Dawson, depicts a love triangle against the backdrop of homosexuality being illegal in the UK. But while Corrin shares the screen with two fellow leads, the actor undoubtedly stole the show at the premiere thanks to their daring fashion choices.

Commanding attention from the crowd, Corrin took to the red carpet in a high-cut black bodysuit, which featured flowing, wing-like sleeves. Looking as though they could have easily been en route to the catwalk, the actor completed the outfit with sheer black tights and high heels. The look was styled by Harry Lambert and Ryan Wohlgemut, and also featured diamond-drop earrings by Cartier. For the beauty side of things, Corrin sported silver glitter on their face, most notably in a stripe over the bridge of their nose, and face gems.

Fellow actor Awkwafina (Crazy Rich Asians, The Farewell) and Turner Prize-winning artist Tracey Emin were both fans of the look, with the former posting multiple flame emojis when Corrin shared the outfit on Instagram.

My Policeman sees Corrin portray Marion Taylor, a Brighton school teacher, who is married to Styles’ character Tom, a policeman. Their relationship begins to unravel when Tom starts an affair with museum curator Patrick (Dawson). My Policeman will land on Prime Video in the UK on Nov. 4.

Meanwhile, Styles was also styled by Lambert for the premiere, and arrived in top-to-toe Gucci. Unsurprising, as he has a long-standing relationship with the fashion house. Luckily, the former One Direction member was on hand to assist with Corrin’s flowing sleeves, lifting them as they exited the stage inside the screening.

So far, My Policeman is enjoying a slightly less eventful promotional run than Styles’ other big release, Don’t Worry Darling. Directed by his partner Olivia Wilde, the film debuted at Venice Film Festival last week amid a series of new and old controversies.