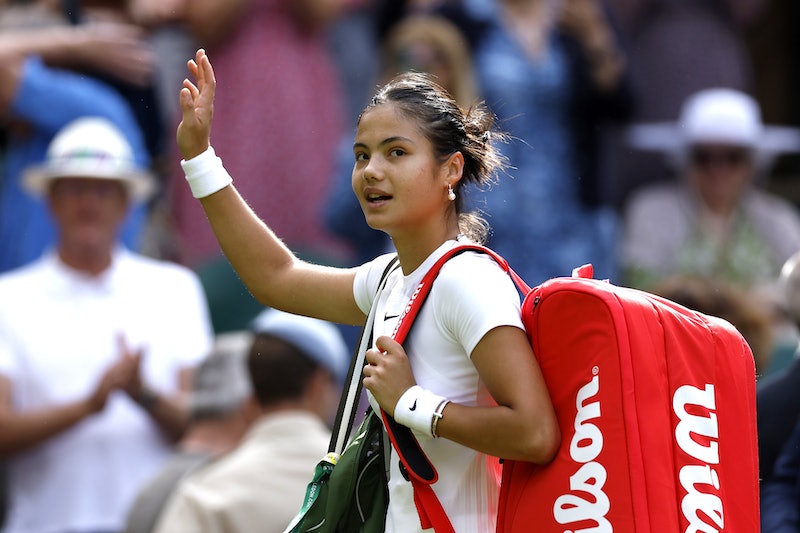 Tennis star Emma Raducanu has debuted a hot new hair colour for summer. Having risen to fame in 2021 with her phenomenal success as a Wimbledon wildcard, the 19-year-old Scorpio has gone from strength to strength. Making waves in the fashion world, she was a guest of Anna Wintour at the Met Gala in September 2021, and she can currently be seen dancing and playing tennis with Dua Lipa in Evian’s latest ad. But now, it’s her fresh ‘do that have got people talking.

Hair stylist John Clark shared a picture to his Instagram of Raducanu’s hair that has taken on more of an auburn-to-blonde hue. A #blauburn, if you will. Clark detailed in the caption that he had achieved the lighter and lifted look with “glowlights”, explaining that he “used the @johnfriedasalons #glowlights technique to lift her naturally very dark base to a multi tonal brunette with lighter areas around the face and where the sunshine would naturally make it shimmer.” I love it, and so does Raducanu. She commented on Clark’s post to say thank you with a heart emoji.

Speaking to Vogue in March this year, Raducanu said that her favourite hair product is actually hair spray. She went on to clarify that it’s because she has “a lot of awkward baby hairs that need attention. If not, I can’t see the ball because they’re in the way!”

Raducanu was in safe hands with Clark, as he’s a bit of a blonde whisperer. His Instagram shows him creating beautiful colours for Ncuti Gatwa’s newly-bleached lid, Caludia Schiffer, and Jodie Comer. But, the Wimbledon favourite is something of a hair and beauty afficionado herself. She’s currently an ambassador for Dior Beauty, and she caused a stir with her sleek-but-striking winged eyeliner when she appeared on the red carpet for the Met.