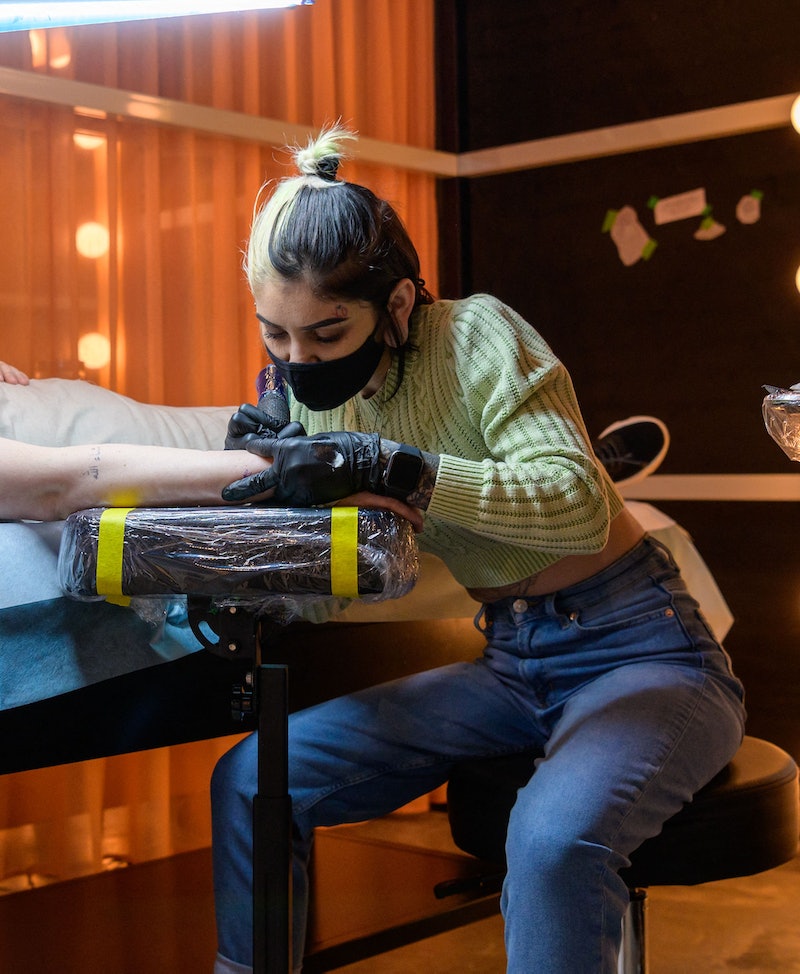 Love tattoos but fear the commitment? There’s a new kind of “made-to-fade” ink doing the rounds on TikTok at the moment. Replacing the tooth gem trend, Ephemeral tattoos are the latest sensation, promising to be tattoos you won’t end up regretting. We must admit, we’re intrigued. According to research by laser-removal studio NAAMA, 68% of Brits regret getting inked after a few months, while a third reckon that their identity has evolved over the years, and don't feel their tattoos reflect this journey.

NAAMA can break down the pigments in permanent tattoos without damaging the skin, and believe that taking away the stigma around wanting to remove tattoos is important. “Rather than focusing on regret or shame, we want people to see tattoo removal as a normal, healthy change,” the studio’s CEO Briony Garbett tells Bustle. “Something which is due to them evolving as a person. People change and that’s okay.”

It’s also true that tattooing is an incredible art-form that isn’t going away. The EastEnders-themed ink adorning my ankle isn’t going anywhere. I love the idea that I’ll need to explain the concept of “Bubbly’s in the Fridge” to a member of Generation Alpha in years to come, but there’s still something appealing about being able to play with new designs without so much pressure. If you’re not totally sure you want a design etched into your skin permanently, then the idea of a fading tattoo is another option that’s very appealing. So, what’s the deal with these new ‘made to fade’ inks, and how do they work? Do they actually work? Step this way…

How Do Ephemeral Tattoos Work?

The company Ephemeral, which boasts a studio in Brooklyn, New York, uses ink which is said to contain medical grade, biodegradable ingredients that shrink over time, before eventually getting absorbed into the skin. Though they won’t reveal exactly what’s in it “for proprietary reasons” the engineers behind the new, patented ink told The New York Times that its make-up is similar to biodegradable stitches that can dissolve without needing to be removed. Ephemeral also say their ink only contains ingredients which have been approved by the FDA for use in other products. Though it’s worth noting that the FDA don’t actually approve the safety of tattoo inks themselves.

“Ephemeral’s made-to-fade tattoo ink is applied by needles into the dermis where it is able to aggregate into large enough particle sizes to stay for a long time, but due to our use of bio-absorbable polymers the ink breaks down over time into small enough sizes for your body’s immune system to remove,” Ephemeral tell Bustle. “Temporary tattoos simply sit on the outer layer of your skin and are removed as your skin renews itself.

There are also a few limitations since Ephemeral is still relatively new — only black ink is available at the moment, and tattoo artists have to use techniques like cross-hatching instead of shading. Unfortunately nobody’s invented a way to make tattoos hurt less, either. Just like a regular tattoo, artists apply this disappearing ink with a tattoo gun, which uses a needle to pierce your skin.

Do They Actually Fade?

Ephemeral say that their tattoos are designed to fade naturally within 9-15 months, but according to the company’s co-founder Brennal Pierre, that process will vary from person to person, depending on different factors like skin type or immune system. Because the very first studio only opened last year, most early-doors punters are still waiting to see if their ink will disappear as promised. Some have been comparing faded pictures on Reddit and expressing concern that their tats aren’t going anywhere while over on TikTok there are plenty of people sharing their almost-faded designs around the 14 month mark.

When Bustle asked Ephemeral if they had any protocols in place should tattoos fail to fade within the given timeframe, the company claimed that: “all Ephemeral tattoos will fully fade given the known degradation rates of the components we use. Their chemistry dictates that in the presence of water, they will break down in a certain time frame. However, when placed in the body, there are different interactions that take place which causes variation in the fade. Skin physiology and immune response, which vary from person to person, affects the way the ink interacts with your body and can also affect fading times. While our current ink formulation is designed to last 9-15 months, the exact time will vary person to person.”

How Much Do Ephemeral Tattoos Cost & What Are The Risks?

Meanwhile, if you’ve got sensitive skin or any particular allergies, it’s worth chatting to your doctor before taking the plunge. “Our ink was designed to be compatible with all skin types, but like any existing product, there will be people who might have allergies and might display sensitivities to Ephemeral tattoo ink,” the company says. “We encourage anyone who wishes to get an Ephemeral and is worried about potential sensitivities or allergies to please inform your artist, studio team, and most importantly consult their physician.”

Where Can I Get An Ephemeral Tattoo In The UK?

Unfortunately, Ephemeral only has locations in the U.S. so far, so to get a “made-to-fade” tattoo, you’ll need to head to New York, Los Angeles, San Francisco, Atlanta, or Houston.