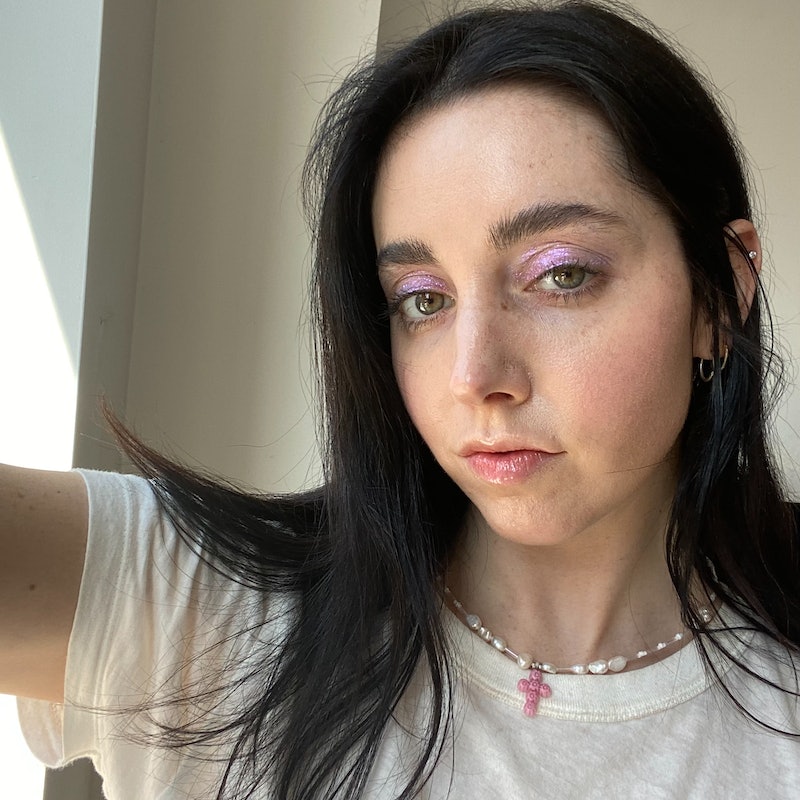 Ask anyone currently between 25 and 40 years old what the first beauty product they bought was, and I guarantee that nine times out of 10, they’ll say something from Hard Candy — the makeup brand you likely came across at the mall as a teen. It was huge in the ’90s and early 2000s, as it sold glittery eyeshadow palettes and lip glosses in all colors of the rainbow (aka everything you’d need to achieve that signature Y2K look). One of those eyeshadow palettes was certainly the first makeup product I’ve ever purchased; I remember the mini sponge-brush applicator that came with it, which I’d use to swipe frosted blue pigment all over my eyelids before heading off to middle school.

Hard Candy wasn’t always a makeup brand, though. It launched in 1995 as a line of colorful pastel nail polish. One of the shades — a baby blue called “Sky” — is what catapulted Hard Candy into the ’90s zeitgeist: While Alicia Silverstone was promoting Clueless on Letterman, the late-night host called attention to her blue mani. And it all came to be because founder Dineh Mohajer mixed nail polish colors to create pastel hues for her friends, who loved them so much they encouraged her to sell them.

“I think what’s held the brand together was that sense of expressiveness and color-forward attitude that you still see today,” says Curan Mehra, Hard Candy CEO. “That sense of daring and self-expression has been a constant throughline for the past 20 years.” The only difference, according to Mehra and Kristen Leonard, the brand’s head product developer and licensed makeup artist, is a bigger focus on skin care. So, while you won’t see the exact OGs you may have worn when you were younger, Hard Candy’s revamped and reformulated makeup collection now features nourishing ingredients like hyaluronic acid and niacinamide. “Skin care has definitely come to the forefront — it’s just as important as your eyeliner, and so that’s something that we’re incorporating into the ethos of the brand,” Leonard tells Bustle.

Though Mohajer sold Hard Candy to LVMH in 1999, it launched an exclusive distribution partnership with Walmart in 2009, which has kept its success alive — and arguably more mainstream than ever. At least, one would think that was the case. But, despite being a beauty editor whose job is to stay in the know with product launches, Hard Candy somehow fell off my radar once I went to high school and wore more “grown-up” makeup (or so I thought at the time). Then, seemingly out of the blue, an email blast about new offerings from the brand caught my eye back in February: Hard Candy was launching metallic liquid eyeshadows, brow products (a gel, pencil, and pen), tinted moisturizer, and bronzer — some of my fave makeup categories. I had to try them immediately.

Five days later, the beauty goods came across my desk and a wave of nostalgia flooded my brain as I tore open the packages to see the very same logo that excited my 12-year-old Limited Too-wearing self. I swiped each one onto my skin and was shocked: Hard Candy still has it. Keep scrolling for some of my favorite Hard Candy makeup products that I highly recommend my fellow millennials to snag.

You can’t talk about the most iconic Y2K beauty brand without mentioning lip gloss. Hard Candy makes one that’s plumping (thanks to hyaluronic acid and peptides) so you get fuller, juicier lips along with a gorgeous wash of color. If you’re really going for the early 2000s vibes, get one of the glittery shades. Trust me.

I’m a gal who’s tested a lot of brow gels. I didn’t think Hard Candy’s would compete with some of my favorites, but... it does. The tiny spoolie gives you a precise application that delivers amazing fluff-enhancing prowess without clumping, and the formula is waterproof — so your arches stay in position, regardless of rain or sweat.

I expect an eyebrow pencil to make my arches look thicker and fuller in a way that looks like I didn’t use one at all. Hard Candy’s pencil does the shaping job in total discretion: The tip is so fine, and the formula doesn’t smudge. Basically, I’d consider it a perfect stand-in for when I’m overdue for my brow tint appointment.

This liquid eyeshadow is the most early 2000s-inspired makeup product I’ve ever encountered. One swipe gives you iridescent frosted pigment that you can either wear as a sheer pearlescent eyeshadow or layer on for a more high-impact Zenon: Girl of the 21st Century vibe. Each color is gorgeous, but I’m really into Crystal, a pastel purplish-pink that makes me feel like Christina Aguilera circa 2001 whenever I’m wearing it.

It’s not often you stumble upon a mascara that isn’t black, but — out of all makeup brands — it makes sense that Hard Candy makes some in non-traditional shades (think royal blue, rich purple, and turquoise). They’re good, too: The wand has fine bristles that coat and separate every lash, and the product contains shea butter for added moisture. And, for the truly bold, you can even snag the glitter mascara to swipe on top of your base coat.

More like this
’90s-Inspired Goth Glam Is This Summer’s Sultriest Makeup Trend
By Danielle Sinay
The Best Of June's Beauty Launches, According To Our Editors
By Bustle Editors
This Blurring Balm Is The Ultimate Mattifier For My Oily Skin
By Danielle Sinay
How To Use Cream Bronzer For A Gorgeous Summer Glow
By Jenna Curcio
Get Even More From Bustle — Sign Up For The Newsletter