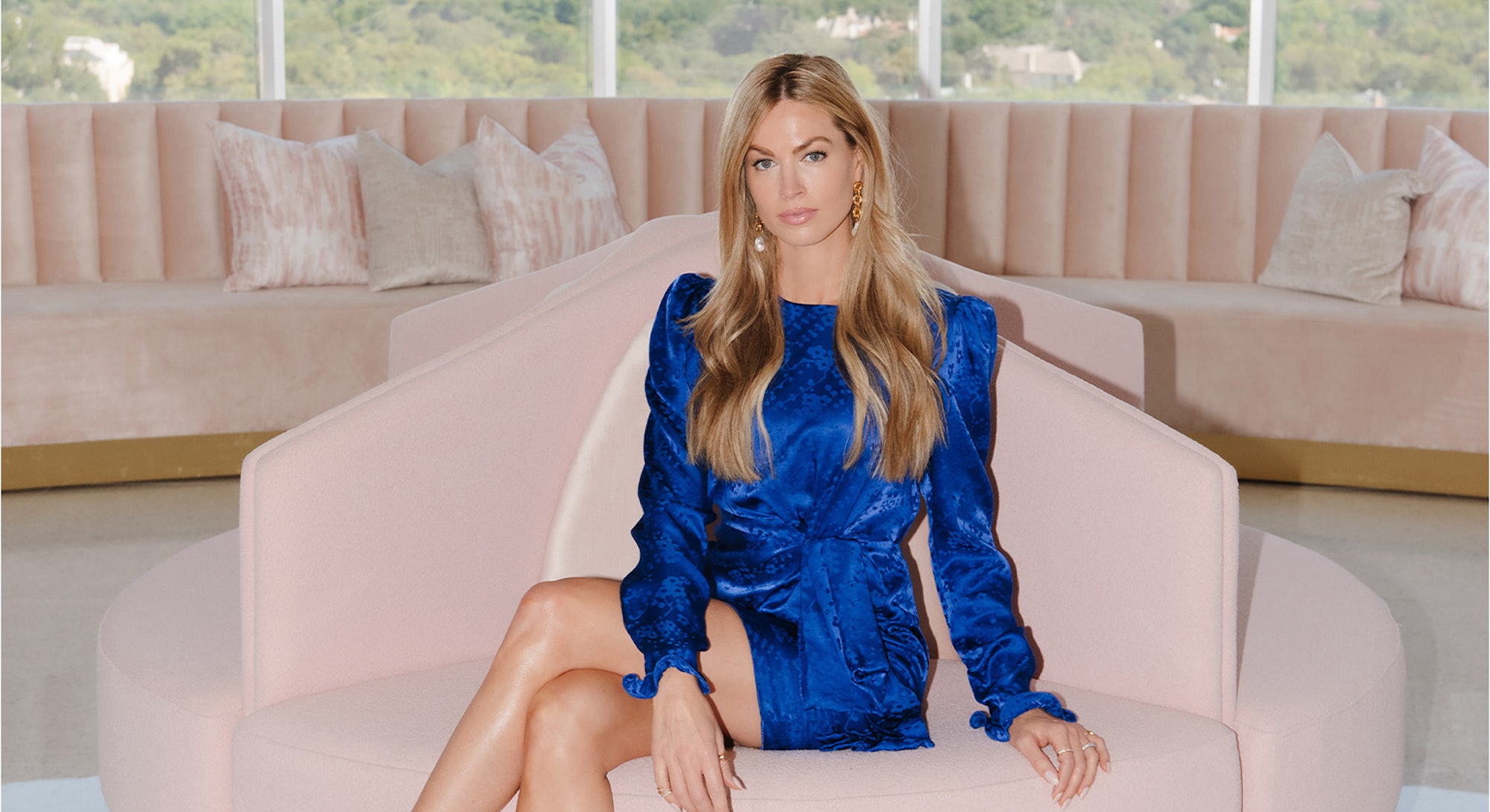 I’ve only known BeautyBio CEO Jamie O’Banion for five minutes, but she’s already insisting we go halfsies on our burger, salad, and peach cobbler. The Dallas-based mom of three is in town for the global debut of her company’s new device, GLOFacial, and to announce a limited-edition version of the tool, GLOFacial x Christian Siriano, at the Project Runway star’s New York Fashion Week show — and although there are gown fittings to attend, backstage B-roll to film, and board member emails to answer, she has no problem taking an hour-long lunch with a virtual stranger.

“Human connection is one of the most precious gifts we have in this life,” says O’Banion, with her long blond hair flowing over a simple black top that she’s borrowed from a colleague (she forgot to bring something to change into for this meeting). “Taking time to sit together is important to me, because I have found getting to know others and understanding their journeys gives invaluable perspective.”

It’s that level of attention and humility that’s O’Banion’s secret to success. In a competitive industry filled with celebrity brands like Fenty raking in $570 million in revenue and legacy partners like CoverGirl bringing in billions, BeautyBio has become a heavy hitter without any of that cache. Following humble beginnings on HSN, BeautyBio now earns hundreds of millions of dollars in sales a year from its competitively priced skin care products and beauty tools, which are sold everywhere from chains like Ulta to luxury department stores like Bergdorf Goodman. BeautyBio’s accessibility and price point, in particular, have helped propel the company’s growth.

“Could we have charged a lot more for our tools and products? Absolutely. But how does that help?” says O’Banion, 40. “The single mom who can’t afford to go get a hydration facial every week but deserves it shouldn’t be denied access to those benefits.”

In August, BeautyBio debuted its patented GLOFacial at-home hydration facial — the predecessor to GLOFacial x Christian Siriano, which launches Monday and features the designer’s drawings on the tool. Its biggest launch to date, GLOFacial dropped exclusively with Ulta and sold out in three days. O’Banion is now hoping that lightning strikes again.

Growing up in Texas, O’Banion would mix her own “formulas” at bath time and spend hours with her anesthesiologist and biochemist father, Terry James, in the labs where he was researching and developing compounds for the world’s biggest cosmetics brands.

“My father and the biochemists would be talking about ionic activity and pH levels, and I was just fascinated by it,” says O’Banion. Not surprisingly, O’Banion joined the family business in Dallas after graduating from Brigham Young University with a marketing and business degree. For eight years, the two worked together creating ingredients for major beauty products, and she eventually became part of her father’s lab’s product development and marketing team.

Beyond geeking out over the chemistry, O’Banion loved seeing how a topical like retinol could visibly change the look of someone’s skin. But she also noticed that popular brands were misusing their ingredients and only putting in a fraction of the suggested active raw materials as a way to save money.

“It was just wrong, and I was getting frustrated seeing this happen,” O’Banion says. “So from that point forward, my whole goal was to help educate everyone about skin care.” That’s how Beauty Bioscience — BeautyBio, in short — was born in 2011. The goal: Give consumers access to the best skin care knowledge and products possible.

“We don’t all get to live like celebrities who have access to amazing facials every week,” says O’Banion, who also had unique skin care insight thanks to her 18-year side career as a commercial print model, which helped fund her business. “But we should, and it should be as easy as opening up your bathroom cabinet.”

To get there, O’Banion relied on her marketing education and experience to debut a patented R45 Retinol System on HSN in June 2011. The line immediately sold out. Less than a year later, the company’s Daytime Vitamin C serum also sold out at launch, and O’Banion loved hearing from customers how much the products made a difference.

“There’s nothing that gives me more fuel or makes me happier than when people reach out and say, ‘My acne and hyperpigmentation are gone, and I have confidence now,’” O’Banion says. “It’s so much more than just a physical appearance — it’s how we feel about ourselves, and it’s awesome to give people access to something that works.”

Despite O’Banion’s early wins, the entrepreneur returned to her research and development roots to plot BeautyBio’s next move. She set her sights on microneedling — “a process typically reserved for facialist clients,” she says — and after more than five years of testing and tweaking, GloPRO, a $200 at-home tool that helps the skin absorb anti-aging ingredients and stimulate collagen production, debuted on HSN in April 2016. It sold out in 12 minutes. It was also when the brand began selling in major retailers like Neiman Marcus, Bergdorf Goodman, and Nordstrom. GloPRO quickly became the number one selling tool at their retail partners, hitting sales of around $30 million in 2016.

It’s been a steady stream of success since then, with GloPRO winning numerous awards and the brand launching in countries across the globe, raking in more than $100 million in sales in 2018, according to industry estimates. By December 2021, BeautyBio’s skin care outweighed tools in sales.

Each year, the BeautyBio teams pick a word to focus on (this year’s word is “anticipate”). It lives at the header of each all-hands Monday meeting as a reminder of what to work toward. “Jamie has a remarkable talent for creating a trusting environment where people can speak their minds without reluctance,” says James, O’Banion’s father. “The objective is, the best idea wins. That is her motto.”

Siriano noticed the same qualities when working with O’Banion. “She is involved in every step of the process, and sometimes when you rise to a certain level of success, you delegate a lot of the day-to-day, and your brand loses a little something,” he says. “I think Jamie works hard to ensure she doesn’t lose touch.”

“When my kids were little, and I was growing the company, I would often apologize for going on a business trip,” says O’Banion, who’s married to fellow entrepreneur Melbourne O’Banion. “But you only apologize if you’ve done something wrong, so I reframed those conversations. Now I’ll say, ‘Mommy has a big meeting, and you have a spelling test. We’re going to high-five, do our things, and talk about it later at dinner.’ That’s allowed my kids to feel like they’re part of the BeautyBio team and mission and empowers them to accomplish their goals.”

Motherhood, O’Banion says, also taught her the importance of patience and teamwork in her business so that everyone has room to grow and feel empowered.

“It’s the memories with our team achieving a milestone everyone worked hard for, or finding success launching a formula that everyone was certain was impossible, that have brought me the greatest joy and satisfaction,” she says. “Every person has value, and one of the greatest ways to show that is to acknowledge and celebrate each person. Everyone needs to feel seen.”