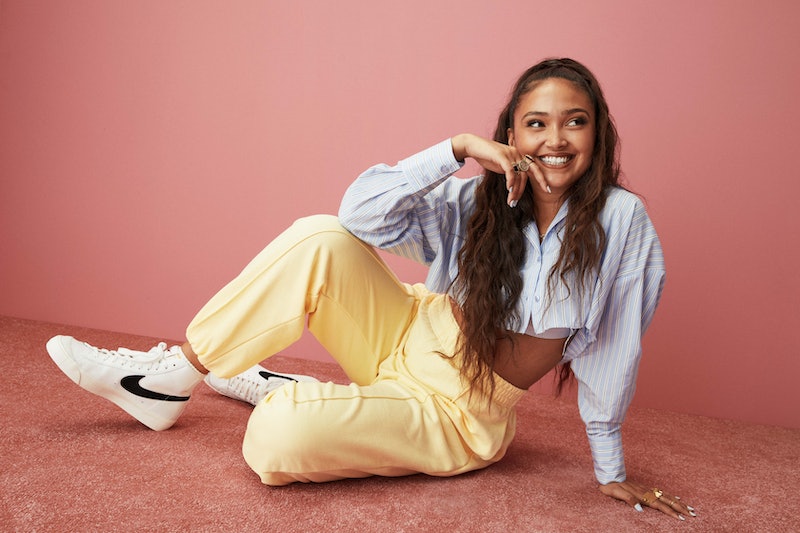 Joy Crookes doesn't mind being called "controversial." "If I am to some people, that's fantastic as that means I'm doing the right thing," she laughs when we meet. It's a word she's been called for speaking out about politics, the Windrush Scandal, and the lack of female representation in the music industry. "It is what it is," she says with a smile. At just 21-years-old the singer-songwriter has a vibe that feels older than her years — maybe it's her husky soulful voice, the complex themes in her music, or her general confidence — which she tells me she's still working on.

Whether she's singing about past-relationships or her personal style, the Banglesdeshi—Irish singer is unapologetic. Speaking of style, there are clear nods to her heritage and her South London upbringing; from her love of Nikes, slicked baby hairs, to stacks of gold jewellery. It's no wonder the singer has been chosen to front a new campaign for ASOS X Nike — this is Crookes' lane.

Crookes clearly has style and substance in equal measure. Nominated for the Rising Star award at this year’s BRIT Awards, in lockdown, she's working on a new album after releasing three successful EPs. I spoke to the singer-songwriter about how much identity plays a part in her style, Bangladeshi representation, and writing "diss lines" for her songs.

On Finding Her Voice

"I definitely fell into music. It's a process..."

"For my Bangladeshi family, I think we shy away from celebrating ourselves. There is a lack of representation.

"I still acknowledge that I'm half-Irish, so a lot of people won't necessarily see me as their Bangladeshi representation. So it's more of a personal journey. I decided to delve into understanding myself and my history, it made me feel stronger... I could finally say 'I rate myself.'

On Speaking Out About What Matters To Her

"I just dress how I dress. The way I dress is tiny glimpses of my culture. Or just something that looks pretty. I hope people can do the same regardless of where they're from and what age they are."

"At the end of the day, identity starts with an 'I' because it comes from within yourself. You can have your influences or references, but it's completely up to you. It's not moulded by mum or dad, it's you."

"Since I Left You felt like a huge progression in my art. My mum's reaction was amazing as I didn't tell her that the whole set was built around my grandmother's whole village in Bangladesh. She walked in and started and crying. There's the real co-sign when you make your mum cry!"

On Her Favourite Lyric

"'I know you're the type to tip waiters with all your emotions' — I didn't think it was anything. Yet to see the reaction after that was nuts."

On Writing Openly About Relationships

"A lot of the things I say in my music I would have said to the person anyway. I don't really write diss tracks but I do have a few diss lines. If I'm cussing you in a song, it's probably because I don't like you and we're not going to talk!"

On the Nike X ASOS Collaboration

"I only ever wore Nike growing up, as well as all my friends and family. So it's like a foot in the door for my uncles and aunties. For ASOS, everyone shops on ASOS. So it's like, wow, I'm part of that now."