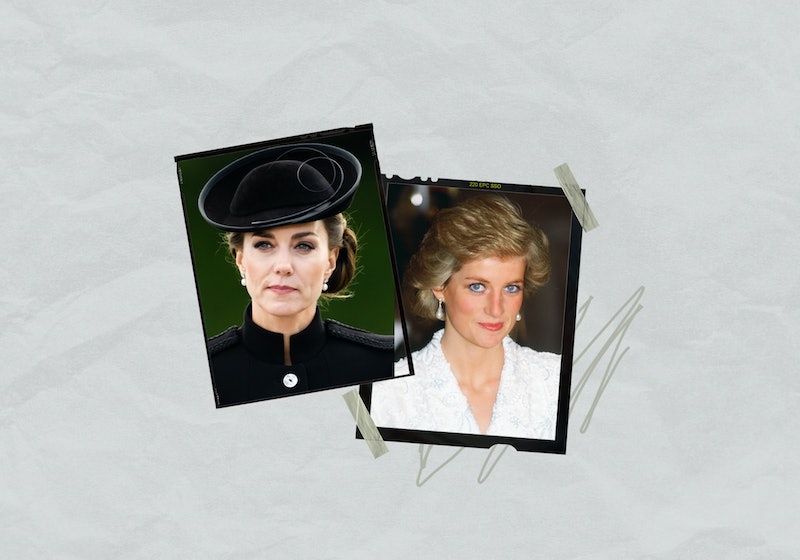 On Monday, Sept. 19, royal family members and world leaders travelled to Westminster Abbey for the funeral of Her Majesty the Queen, Elizabeth II. Among them was Kate Middleton, who arrived at the service with her two eldest children, Prince George and Princess Charlotte. As per the Daily Mail, the Princess of Wales came dressed in an all-black ensemble, featuring a blazer and a hat with netting finish. The senior royal also appeared to pay tribute to the late Queen by wearing a pair of Bahrain drop earrings and a Japanese pearl choker necklace that previously belonged to Her Majesty.

Pearl jewellery is favoured among members of the royal family during periods of mourning. As Metro notes, the necklace worn by Middleton includes four rows of pearls with a central diamond stone. The late Queen Elizabeth II first loaned the piece to her granddaughter-in-law back in 2017. Decades earlier, in 1982, the late monarch also loaned the necklace to the late Princess Diana during a state visit from Queen Beatrix of the Netherlands. Meanwhile, the Bahrain pearl earrings worn by Middleton at the funeral service were part of the Queen’s royal collection.

On Sept. 18, the Princess of Wales also wore a three-strand pearl bracelet during a meeting with the First Lady of Ukraine, Olena Zelenska, at Buckingham Palace. Middleton’s choice of jewellery on the eve of Her Majesty’s funeral was an apparent tribute to her late mother-in-law, Princess Diana, who previously owned the bracelet.

The bracelet in question was designed by Nigel Milne, and was left to Prince William following his mother’s death in 1997. The future King then gifted the piece to his wife after their wedding in 2011.

In the wake of the Queen’s death on Sept. 8, Middleton has paid tribute through her choice of jewellery on several occasions. While at Sandringham alongside her husband, the Princess of Wales wore a pair of pearl earrings that belonged to the Queen. Elsewhere, while attending the procession of Queen Elizabeth II’s coffin, Middleton also wore Princess Diana’s pearl earrings and the Queen’s diamond and pearl brooch.