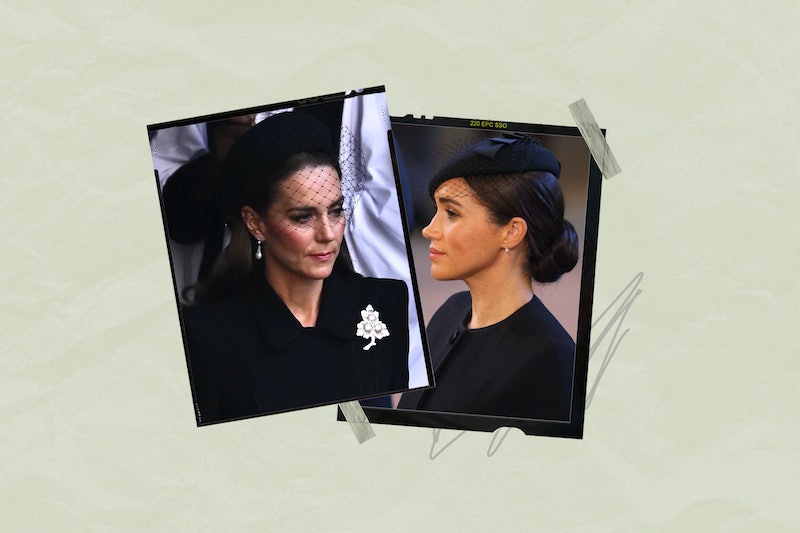 Following a procession through London led by King Charles III, Queen Elizabeth II is now lying in state at Westminster Hall. On the evening of Sept. 14, after hundreds of members of the public paid their respects, members of the royal family came to pay tribute to their mother and grandmother, including the Princess of Wales and the Duchess of Sussex.

Dressed in the traditional mourning colour of black, Kate Middleton wore a new Catherine Walker coat dress. Meanwhile, Meghan Markle wore a Givenchy coat which she first wore in 2019 during an event at the Association of Commonwealth Universities. The Duchess of Sussex completed her all-black ensemble with Paul Andrew pumps and a Loewe postal bag, both of which she’s previously worn.

The Duchesses each paid tribute to the late monarch through their choice of jewellery. Kate wore the Queen’s pearl and leaf brooch, per The Court Jeweller. She has worn this on many somber occasions, including a visit to Belgium in 2017, marking the centenary of the World War I Battle of Passchendaele, and a WWI remembrance service in 2018. The newly-recognised Princess of Wales also wore a set of pearl earrings that once belonged to Princess Diana, which she showcased during a memorial service for Prince Philip in March 2022.

Meghan wore a set of diamond and pearl earrings reportedly gifted to her by the Queen in 2018. Gemologist Alexandra Mitchell told Hello! magazine that pearl and diamond earrings were a favourite of the Queen and that she’d often give them to members of the royal family. “There is a chance these were given to Meghan by the Queen herself, which for Meghan is a poignant gesture on her part; to wear them during the Queen’s procession,” Mitchell said.

Pearl earrings were traditionally worn as mourning jewellery in the Victorian era. “Pearls are typically worn for important occasions such as weddings and funerals,” Mitchell explained. “White was the chosen colour for mourning until Queen Victoria made black more fashionable.” The monarch famously wore black for 40 years following the death of her husband, Prince Albert.