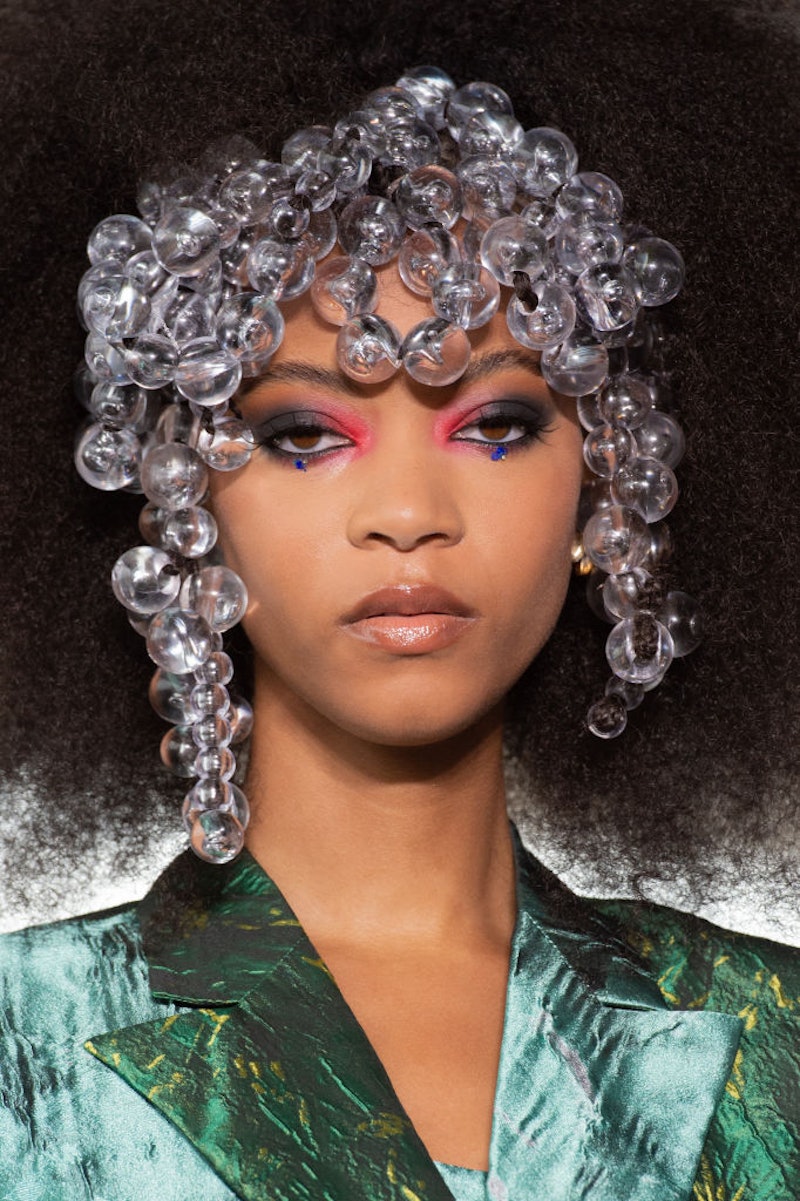 Each spring and fall, the runways of fashion week grant the world a peek at the fashion and beauty trends that are about to blow up the following season. Sure, these also come via celebrity red carpet moments and your social media feeds, but there’s something about the biannual catwalks that feel more definitive — especially since they’re dreamed up by the industry’s leading hair stylists and makeup artists. If you’ve been catching glimpses of New York Fashion Week Spring/Summer 2023’s beauty looks, you already know we’re in for some seriously chic and fun makeup and hairstyle trends.

For the spring/summer 2023 season, don’t expect the going-out lewks to go anywhere. In fact... bold and experimental glam is about to be turned all the way up. For example: Early 2000s-era rainbow-colored eyeshadow was spotted on multiple runways, including Prabal Gurung and Alice + Olivia. Smoky eyes are still reigning supreme in the beauty world, too, if the runways at Jason Wu, Pat Bo, and Sergio Hudson have anything to say about it (hint: they do). And rather than matte finishes, the spring and summer will feature all of the glow by way of extra-glassy skin.

The hair trends seen on the catwalk so far are a mix of intricate styles that’ll take some effort to recreate along with more low-maintenance looks that are a cinch to DIY. The sleek bun got the fashion week treatment at Jason Wu and Christian Siriano, while spiky bun mohawks were seen at Altuzarra and voluminous ’90s blowouts at Son Jung Wan.

At the Alice + Olivia show, models’ lids were decked out in shades like hot pink and turquoise using shades from Too Faced. Over at Prabal Gurung, M.A.C. Cosmetics Paintsticks were used to achieve the purple, red, yellow, white, and blue eyeshadow looks. Susan Alexandra’s spring/summer ‘23 comedy show-slash-fashion presentation featured whimsical colors — like bright yellow and fluorescent pink — and retro-style black dots underneath the eyes. And the makeup at Marrisa Wilson was meant to represent the flag of Guyana, Wilson’s home country; makeup artist Nick Lujan used Kevyn Aucoin products to add pops of red and green on models’ inner corners.

On the Eckhaus Latta, AnOnlyChild, Tibi, and Collina Strada runways, models sported glass skin that literally glowed. Jocelyn Biga, Global Pro Artistry at Estée Lauder, says she wanted the models at AnOnlyChild to have an “earthy, glamorous look” that enhanced their natural beauty. For the dewy complexion, she used a drop of the Estée Lauder Advanced Night Repair Serum for the glossy finish. At Collina Strada, makeup artist Marcelo Gutierrez created a luminous glowy finish using products by M.A.C. Cosmetics, including the Fix+ Magic Radiance mist.

We also saw lots of ’90s glam vibes: extra smoky eye makeup was used at Jason Wu, Sergio Hudson, PatBo, and Tommy Hilfiger. The models at Jason Wu also wore a touch of shimmer on top of bold black eyeliner (via the Jason Wu Beauty Dual Liner); at Sergio Hudson, models were prepped with Relevant’s One & Done Everyday Cream for a perfect velvety base. And Stila’s Global Beauty Director, Charlie Riddle, used the Stay All Day ArtiStix Graphic Liner in Hustle and Tango along with the brand’s Smudge Pot for the look at PatBo.

At Altuzarra, hairstylist Jawara created adventurous looks with a twisted mohawk updo on some models. Over at No Sesso, hairstylist Malcolm Marquez went with futuristic vibes with structural looks that defied gravity.

Slicked-back buns were seen at multiple shows, including Christian Siriano, Jason Wu (where Jimmy Paul used Olaplex products to braid models’ hair into a low pony that was twisted into a bun), Deity, and Supima. To keep the look extra sleek at Siriano, stylists used the Dyson Corrale Straightener to smooth models’ strands before tying them back.