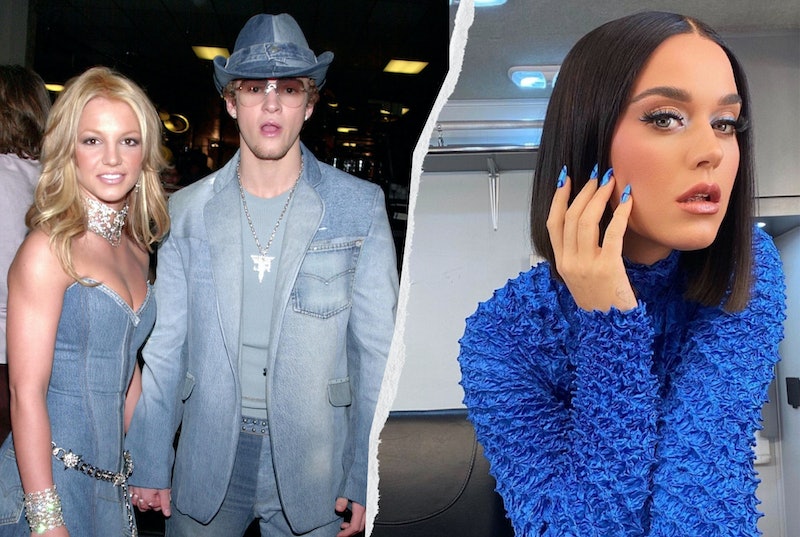 Oh, the 2000s. It was a time when you were watching Lizzie McGuire and Even Stevens and listening to “Dirrty” by Christina Aguilera while typing your AIM away messages LiKe ThIs. For millennials, looking back on that period is like reopening a time capsule filled with some of the fondest memories and most devastating embarrassments — and your personal sense of style during those years probably falls into the latter category. But the thing is, even though you hope your fashion sense has evolved since the preteen stage, if someone tried to extort you with photos of you wearing 2000s fashion trends like butterfly clips and frosted lip gloss, they’d be coming away empty-handed. Everyone has their share of regrets in life — both fashion and otherwise — but lamenting how you looked in the first several years of the new millennium isn't among them.

It’s OK to be swept up by 2000s nostalgia, because it was the time period when some millennials started buying their own clothes and picking their own trends. "For preteens, those early choices that they are able to make of their wardrobe become really important," Natalie Nudell, adjunct instructor in the art history and museum professions department at the Fashion Institute of Technology, tells Bustle.

Shopping and experimenting with your hair were suddenly becoming important in a way they hadn’t been before. The 2000s were when you first started thinking about how your appearance could be an extension of your identity.

As embarrassing as some of those old pictures may be, consider thinking of the clothes you wore and the way you styled your hair as a rite of passage. If nothing else, it made for some great memories.

And, those trends now live on through Instagram accounts dedicated to the fashion of decades past. "Niche interests can garner huge audiences and communities in a way that they had really not been able to previously," Nudell says.

Take a walk down memory lane to revisit some of the biggest 2000s fashion trends.

I owned a Von Dutch hat, and I didn’t even like accessorizing with hats. I’m pretty sure I saw Paris Hilton and Nicole Richie rocking Von Dutch during an episode of The Simple Life, and when I finally found one at the mall I had to buy it. Owning a Von Dutch hat was an important moment in early 2000s fashion.

In the early 2000s, the back middle belt loop of a pair of low-rise jeans was probably the most touched thing in junior high and high schools across the country. Why? Because you were casually tugging up your low-rise jeans all day.

“In the mid ’90s, Alexander McQueen had an iconic fashion show where he showed super low-rise pants where the upper buttocks were exposed," Nudell says. "That really trickled down to the way pants and trousers were made for both men and women.”

Low-rise jeans might’ve been great for flaunting your midriff, but they also made bending over feel like a Cirque de Soleil routine.

Technically, lace-up anything was in style in the 2000s. This might rock your world, but I had lace-up jeans that not only laced in the fly/button area, but also at the bottom of the leg where they flared out.

5. Jeans With No Back Pockets

These made carrying your frosted lip gloss a bit complicated, but 2000s fashion was all about jeans with no back pockets. The less pockets, the better. If you wanted to be the envy of everyone in your class, you desperately looked for a pair of lace-up jeans that also had no pockets.

So you couldn’t find any jeans without pockets, what do you do? Go to the opposite end of the back pocket spectrum, of course. Embellished, bedazzled, and otherwise ornate back pockets were every bit as trendy as not having any pockets at all.

I once owned a pair of jeans whose back pockets were shaped like hearts. As I’m sure you can imagine, they were totally functional and ideal for holding heart-shaped things. You may scoff, but unique jeans are coming back in style.

Remember those scrunchy shirts that look like they were made for a toddler but somehow expanded into a normal size when you put them on? In 2000s fashion, those scrunchy, popcorn shirts were where innovation met elegance.

The tattoo choker necklace was probably the first piece of jewelry I loved, and I wasn’t the only one. “In the early 2000s, we start to see revivals of older styles that had choker necklaces,” Nudell says.

Your neck probably felt naked without a tattoo choker on it. There were few worse feelings in those days than when you had to retire one of your tattoo choker necklaces that became too stretched out to accurately be called a choker anymore.

For the rest of my life, I’ll probably never again wear as many halter tops as I did in high school. Maybe during those hormonal, angst-ridden years, the ennui of traditionally strapped tops was just too much to bear. Wearing a strappy halter top with Old Navy flip flops was why most of us looked forward to summer.

10. Pants With Messages On The Butt

Whether it was a saucy “Sassy” in purple cursive or the word “CUTIE” in glittery capital letters, advertising your personality traits on your butt was the coolest in 2000s fashion. The other option was to have your favorite brand name splashed across every article of clothing you owned.

"Brands literally put their name on everything as a way of differentiating themselves from other groups and also signaling very directly to people around you what brand affiliation you have,” Nudell says.

Remember those pants we all wore before yoga pants took their place? They were real, actual garments, but they were the closest you could be to not wearing anything while still covering your lower body? I miss them. While wearing these pants, it felt like my lower body was ensconced in a very forgiving cloud of fabric and mystery.

For several years in the 2000s, it seemed like every mall had a kiosk or a storefront where people were airbrushing custom t-shirts. Most people went the creative route and got one with their name on it, and some couples would even get matching tees. They were all the rage in 2000s fashion.

Denim owes a lot to 2000s fashion. For a long time, people assumed denim could only be used for making jeans and jackets, but that’s just not the spirit of the 2000s. “With celebrities and music and pop stars like Britney Spears, the denim trends really started making a major impact and influencing what people were wearing,” Nudell says.

No hair accessory has ever been as underrated as the butterfly clip. Whether it was those multicolored ones that came in a pack of 10 or the silver, glittery ones that made it look like a gilded butterfly just landed in your hair, it’s time to bring butterfly clips back. No hair device has properly restrained my baby hairs since the butterfly clip.

Whether they were peel and stick fake earrings or embellishments on your sunglasses, rhinestones were equivalent to 14-karat diamonds in 2000s fashion. Never again in my life will I be brave enough to wear jeans that had rhinestones running down the side.

With a slightly cropped silhouette, cap sleeves, and a pointelle design in some instances, a baby tee is peak 2000s. It’s also peak today. Style your simple top with everything from a silk midi skirt to cut-off denim shorts, depending on where you’re headed.

Think back to Carrie Bradshaw years and dive head-first into the baguette bag trend. With a flat silhouette and a profile that sits comfortable right beneath your armpit, it’s a great grab-and-go bag that will have you dreaming of a retro decade and loving every moment of it.

Whether you throw one on over a tank, tee, or button-down shirt, or choose to button it up most of the way, the world is your oyster. In every color, neck shape, and overall silhouette, a cardigan sweater is an absolute wardrobe essential this year, and a 2000s throwback everyone loves.

Tie your hair in a knot and open up a tortoise hair claw. It’s the easy twist-and-go hairstyle solution you loved in the 2000s that is slowly becoming ubiquitous again today.

The preppy staple from your 2000s wardrobe is back. And this time, you’re going to pair it with mini skirts and denim shorts instead of low-rise jeans and track pants. Add a little bit of boyish sporty charm with the chunky-striped top that you used to love.

The 2000s were all about denim, so the trends were certainly plentiful. And though jeans are a classic wardrobe staple, you likely searched for ways to amp up the look, including patchwork jeans. You know the ones: all different colors of denim sewn into one, likely paired with a “going-out top.”

Speaking of “going out tops,” this trend ran the gamut, but was often considered anything that could be considered fit for after-hours wears. Halters, spaghetti straps, or cowl necks, the going-out top was usually constructed of a super stretchy acrylic jersey weave or silk, trimmed with lace.

Betsey Johnson really made this trend soar, with sheer chiffon overlay on acrylic weave or silk dresses. Typically spaghetti strap and boasting an allover embellishment or embroidery pattern, you wore them to Bar Mitzvahs, proms, formals, and more.

From Steve Madden and more, these were likely your first pair of “real” heels. You slipped your toes into them to show off your latest bright blue, glittered, or even rainbow pedicure, with anywhere from a one to two inch slim stiletto heel. They were styled with everything from the aforementioned formal dresses to jeans, of course.

More like this
15 Of Carrie Bradshaw’s Best Handbags From Sex & The City
By Dominique Norman
Cruz Beckham Teased New Music With An Adorable Nod To Mom Victoria Beckham
By Stephanie Topacio Long
Phoebe Dynevor Serves ‘Bridgerton’ Underboob In Stunning Floral Gown
By El Hunt
Looking Back At Kylie Jenner's Best Fashion Week Looks
By Allie Fasanella
Get Even More From Bustle — Sign Up For The Newsletter
From hair trends to relationship advice, our daily newsletter has everything you need to sound like a person who’s on TikTok, even if you aren’t.

This article was originally published on March 17, 2015