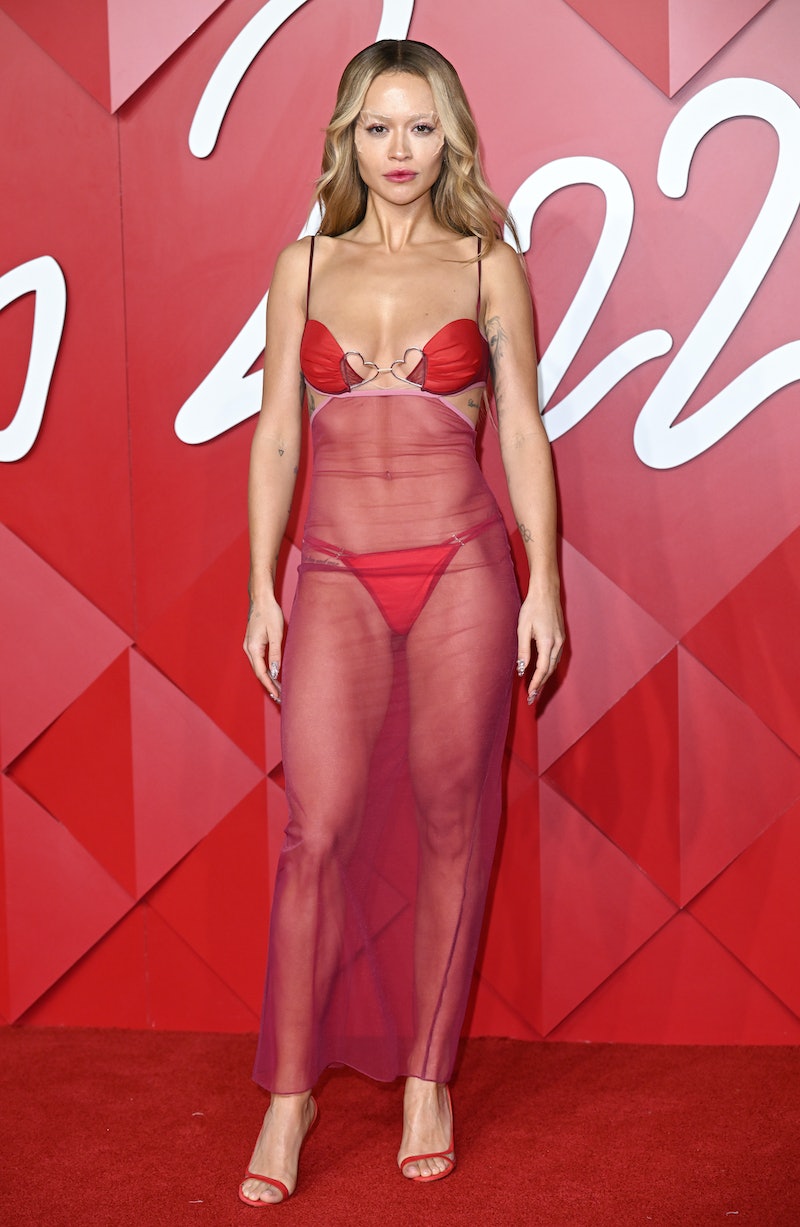 The stars came out in force to attend the British Fashion Awards on Dec. 5. Celebs including Florence Pugh, Elizabeth Debicki, Leigh-Anne Pinnock, and Jodie Turner-Smith were all serving looks, wearing ensembles by some of the fashion industry’s top designers. Actor Lily James and Love Island 2022 winner Ekin-Su opted to wow the red carpet in sheer dresses, but it was Rita Ora’s sheer dress that stole the show, accompanied by an intricate makeup choice that made the singer look almost unrecognisable.

Ora took to the red carpet wearing a sheer crimson outfit from Nensi Dojaka’s spring/summer 2023 collection, paired with a bralette accompanied by heart motifs, a thong, and stilettos in the same colour. However, she opted to go a different route with her makeup, that looked out of this world. Ora thanked makeup artist Isamaya Ffrench on her Instagram Stories, as they accentuated her eyes with fin-like prosthetics, giving total mermaid vibes. Lady Gaga has also rocked facial prosthetics in the past.

To draw attention to the ethereal makeup, Ora opted to wear minimal jewellery. The singer, who reportedly married her partner Taika Waititi in an “intimate ceremony” over the summer in London, made sure to document her night on social media.

It’s been nothing but sheer for Ora as of late, having only recently channelled her inner Kylie Minogue on a night out in London’s Mayfair. During the MTV EMAs 2022, Ora went through eight outfit changes throughout the night, including a very important dress once worn by Whitney Houston, which included a sheer aspect. Similar to her British Fashion Awards look, Ora wore a black sheer maxi dress designed by Jacquemus with matching underwear to Glamour UK’s Women of the Year Awards in London on Nov. 8. Like the EMAs, the singer changed outfits during this event, also wearing a sheer, 70s-inspired after-party gown.

More like this
'Love Island's Will Got A Farm Animal Manicure & It's *Adorable*
By Sam Ramsden
Rita Ora Joined The Cut-Out Trend With These Bejewelled Butterfly Trousers
By El Hunt
Kate Middleton Wore The Ultimate '90s Power Suit
By Sam Ramsden
Every Single Thing In Maya Jama’s 'Love Island' Wardrobe
By Darshita Goyal
Get The Very Best Of Bustle/UK
Sign up for Bustle UK's twice-weekly newsletter, featuring the latest must-watch TV, moving personal stories, and expert advice on the hottest viral buys.